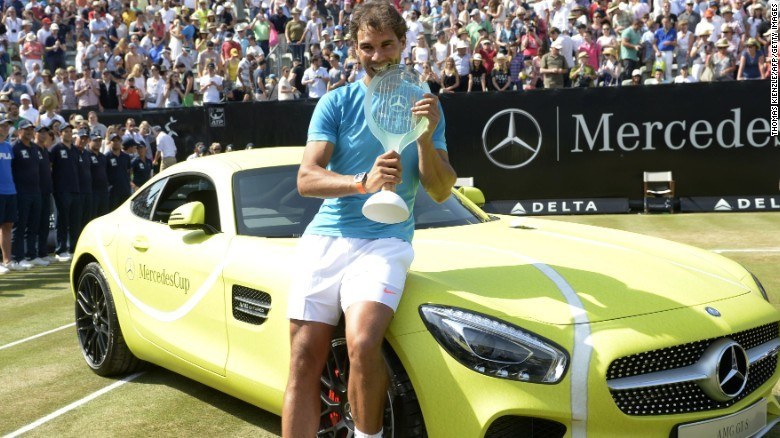 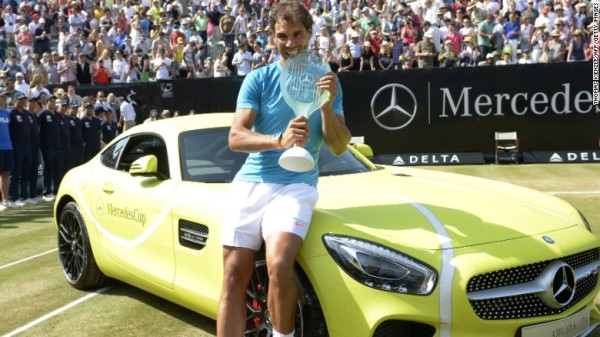 Rafael Nadal took home his third MercedesCup title after defeating Victor Troicki 7-6(3), 6-3 in Stuttgart on Sunday. This was his first grass-court title in five years since winning in Wimbledon in 2010.

Nadal, who takes home €104,600 and 250 Emirates ATP Ranking points, clinched his first grass-court crown in five years, since triumphing on the lawns of Wimbledon in 2010. Overall, it was the Spaniard’s 66th tour-level singles title and second on the ATP World Tour this year, having emerged victorious on the clay of Buenos Aires.

“It’s a very special title,” said Nadal. “Since 2011 I didn’t play a final on grass, so win a title here is very good news for my game and for my mentality too. Congrats to Viktor for a great tournament. He’s playing great and will have some positives for the week.

“At this point of the season, every victory is important and every title means a lot to me. I’m happy for that… Thank you very much for all the support here in Stuttgart.”

The top seed needed one hour and 27 minutes to prevail over Troicki, firing 11 aces, while converting on his lone break point. He won an impressive 86 per cent (42/49) of first serve points as well.

While the first set featured no breaks of serve, Nadal took the initiative to open the second, securing the match’s only break in the fourth game and consolidating for a 4-1 lead. He would eventually convert on his third match point to close out the win.

The Mallorca native, who previously won the Stuttgart title in 2005 and ’07, improved his FedEx ATP Head2Head record to 5-0 against Troicki.

The World No. 28 Serb was bidding to claim his third ATP World Tour title in his seventh final. He hoisted his first trophy of the year to open the season in Sydney (d. Kukushkin). Troicki takes home €55,080 and 150 Emirates ATP Ranking points for his efforts.

“In important moments my focus was not 100 per cent,” said Troicki. “He served very well the whole match. Even though it was a great week in reaching the final, I’m disappointed to lose this match. I had my chances and didn’t use them. I lost to a great champion. He served better and congrats to him.

“It’s a good result. I’m now going to London and we’ll see. I have high expectations for the grass season and this gives me a lot of confidence.”

He seemed a little humbled by his prize presentation as the car was a rival to the car manufacturer he’s well paid to be an ambassador for. 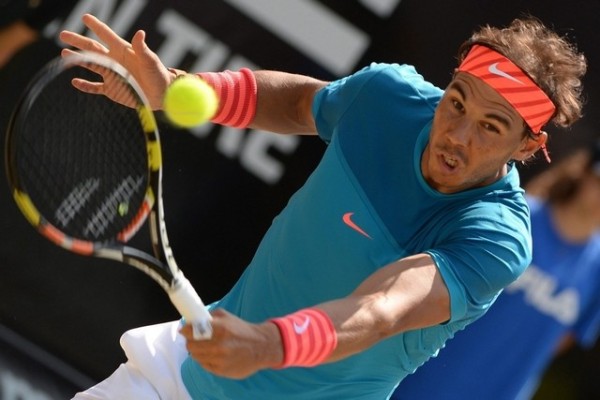 It was not so much his performance in the Stuttgart final, where he beat Victor Troicki in straight sets to bounce back from his French Open disappointment, but more the prize presentation.

Most people would be delighted with a V8 Mercedes sports car, but perhaps not someone who is a well-paid ambassador for a rival automotive manufacturer.

“It’s not a Kia, but it’s still good,” Nadal said diplomatically after a brief inspection inside the garish yellow vehicle, winning huge laughs from the crowd.

“Will you drive it at home?” came the inevitable question.

Short silence. “Without the cameras around, perhaps yes,” conceded the Spaniard, who has been sponsored by Kia for almost a decade.

Then came the qualifier.

“I don’t know if I can change the color, because the color is a little bit too much for me,” demurred the man well known for his politeness.

It was a lighthearted end to an “emotional” week for Nadal, whose long French Open reign was ended by Novak Djokovic in the quarterfinals at Roland Garros.

While most of the top men’s players took a break after Paris, the 29-year-old went straight back into the fray at a German tournament he won in 2005 and 2007 — this season it switched from clay to a grass surface and moved to after the French grand slam.

“It’s been a tough couple of years playing on grass, with problems in my knees,” said Nadal, who last year lost his opening match at another German grass-court event in Halle and was beaten by young Australian Nick Kyrgios in the fourth round at Wimbledon.

“Today I’m ready to play again on grass, my knees are well and so is my tennis, so I’m very happy.”

While Roger Federer will defend his Halle title this coming week, Nadal will head to Britain for the Queen’s Club Championships in London, lining up with new French Open champion Stan Wawrinka and home hope Andy Murray.

It was his 66th ATP Tour title, but just his second in a year where the former world No. 1 has dropped to 10th in the rankings. He won Wimbledon for the second time in 2010, and lost for the third time in a final there the following year, but has not passed round four since.

Troicki, ranked 28th, was also seeking his second title this year but had to make do with $62,000.

The 33-year-old also won the co-sanctioned Dutch tournament in 2013.