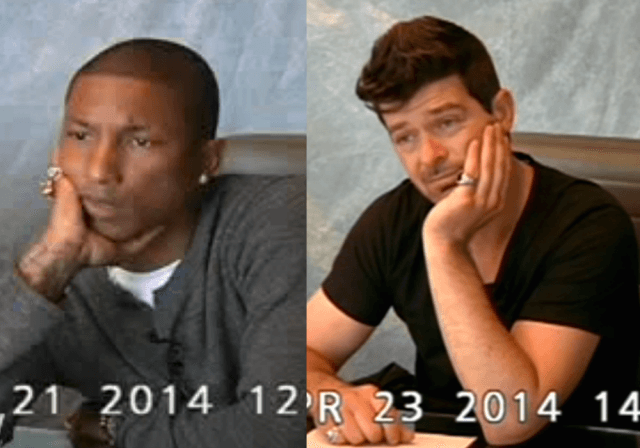 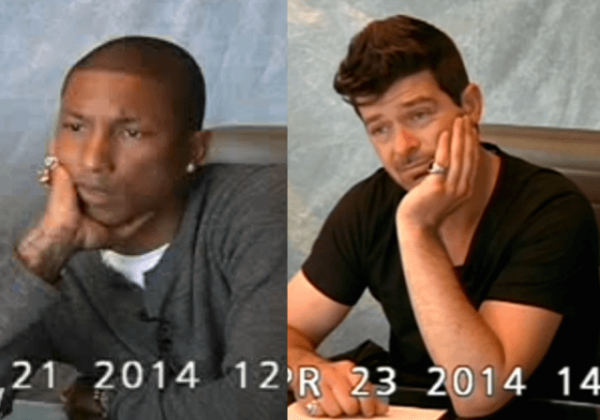 According to the New York Times, the $7.3 million settlement is broken up between $4 million in damages, $3.3 million from the profits that ‘Blurred Lines’ has made and about $10,000 in statutory damages. This will all be paid to Marvin Gaye’s children, Nona, Frankie and Marvin Gaye III.

Although the lawsuit was settled months back, the story has caught wind again as The Hollywood Reporter posted the deposition videos of both Robin Thicke and Pharrell Williams.

In Thicke’s video, he is asked if he was drunk and on Vicodin in a VH1 interview that was played in court. The singer replies, “I didn’t do a single interview last year without being high on both [alcohol and Vicodin].” Going on to say, that he was also under the influence of both while on The Oprah Show.

Thicke is also questioned whether he makes it a “habit” to be dishonest in interviews, in which he answer, “when I give interviews, I tell whatever I want to say to help sell records.” The deposition also shows Thicke confessing that he doesn’t consider himself an honest person.

Needless to say, I don’t think his deposition played in his favor.

Arguably, things got even worse in Pharrell’s deposition. The successful musician and producer quickly becomes combative when questioned about his musical abilities.

The ‘Happy’ singer is asked what chords are used in a typical bluegrass song, in which Pharrell bluntly replies, “you should check it out…I’m not a teacher.” The opposing lawyer continues to try and get an answer out of him, but Pharrell simply responds, “I’m not here to teach you music.”

The lead attorney for the Gayes goes on to point out that Pharrell has never received any formal education when it comes to music. However, the singer states that he can read musical notation though he is unable to write it or know the pitch simply by reading a note. Unfortunately, this doesn’t look all too good considering he is the mentor for aspiring singers on The Voice that can do much of what he admits he is unable to do.

The deposition continues, as the lawyer asks Pharrell to name two musical notes. However, he seems unable to do so and repeatedly replies, “I’m not comfortable with this question.” Adding, “I can’t answer you at this time.” Cringe worthy to say the least.

Basically, every question regarding musical notation, such as timing, scales and notes, Pharrell refuses to answer, as he “is not comfortable.” On multiple occasions, he tells the lawyer to refer to the musicologist in the room.

As they begin to dive into the similarities between ‘Blurred Lines’ and ‘Got to Give it Up,’ Williams admits that he understands how people can say they hear a connection between the two songs. However he goes on to point out, “silk and rayon are two different things, they just feel the same.”

Next, he explains, “I did not go into the studio with the intention of making anything feel like, or sound like, Marvin Gaye.”

Unfortunately, he gets himself into some hot water when the lawyer brings up an interview where Pharrell says that he was channeling his inner Marvin Gaye when coming up with the percussion for the song. Evidently, this statement contradicts his earlier statement saying that he never thought about Marvin Gaye or ‘Got to Give it Up’ during the creation of ‘Blurred Lines.’

Pharrell makes a point of saying that now that he looks back he feels he encompassed some Marvin Gaye-like groove when creating the song, but reiterates that during the process he did not channel Gaye.