Home Sports NBA What Are The Odds For Golden State Warriors To Win The NBA... 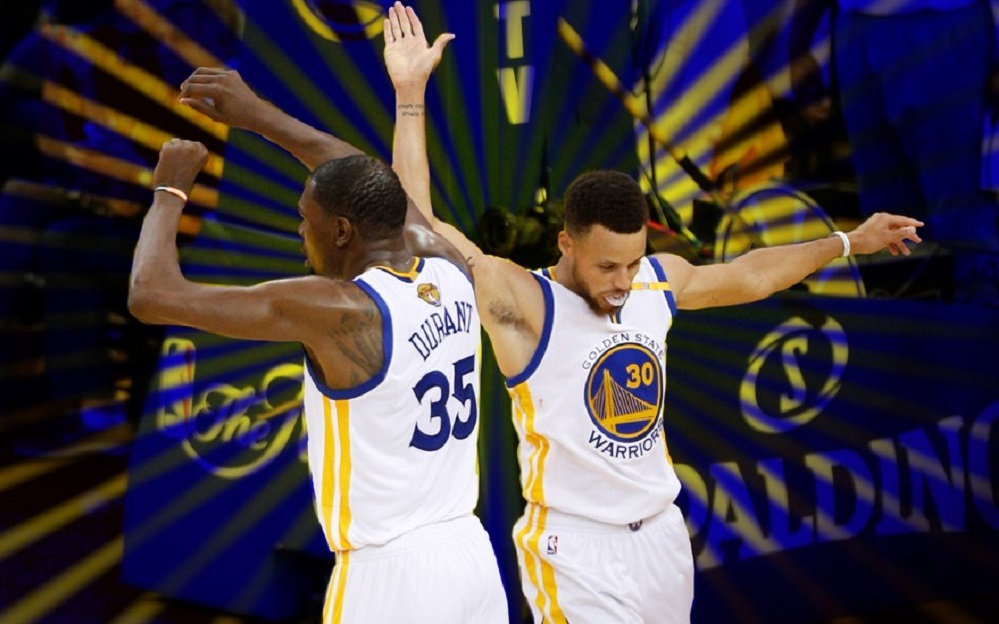 The Golden State Warriors have been installed as heavy favourites to be the winners of the NBA 2017/2018. In fact, most online bookmakers have them odds-on to be crowned champions. Market leaders Unibet currently have them priced at 11/20 to be outright winners with their nearest rivals, the Cleveland Cavaliers, way out at 6/1. The question is, do they deserve to be such heavy favourites or can the likes of the Cavaliers or the Houston Rockets upset the odds?

The Western Conference for a long time has been extremely competitive, but the reality is that everyone is usually playing for second place, behind the Golden State Warriors. Before the campaign began you would have said that unless injuries hit the Warriors, something that nobody wants to see, then they should go on to win the Western Conference, to be quickly followed by the NBA title of 2017/18. Kevin Durant and Steph Curry are integral to Warriors success, and if they stay fit, they’ll remain sports betting favourites.

As things currently stand in the Western Conference table, the Warriors are in second place behind the Houston Rockets. They have won 19 games, losing 4 with a win percentage of .760. The sports betting operator, Unibet have the Rockets, priced out at 8/1 to be crowned NBA 2017/18 champions have 18 wins and 4 defeats to their name with an impressive win percentage of .818. Even in light of the Warriors being sat in second place, they still remain odds-on to lift the crown, and that says it all about how strong they are as an outfit.

The real likelihood is that Golden State will go on to overturn Houston Rockets’ lead at the top of the current standings. The Cleveland Cavaliers, led by the superb LeBron James, are extremely likely to overtake the Boston Celtics at the top of the Eastern Conference before the season is out. This will then see Golden State and Cleveland meet for the fourth consecutive year in the final. The Warriors demolished the Cavaliers in the 2017 final, winning 4-1 and they’re heavily fancied to repeat the feat this season.

Fans, pundits, and experts have already expressed their opinions on the matter and are in total agreement that unless there are major injury problems (like Stephen Curry‘s sprained ankle knocking him out for two weeks), then the Warriors will be far too strong for anyone to stop, even the Cavaliers. Since Kevin Durant arrived and proved himself capable of performing well in the side, the gap in quality only grew further, and it certainly shows no signs that it will narrow anytime soon, no matter who the other teams sign.

The Warriors are right to be named odds-on favourites and even though the likes of the Cavaliers have added more talent around talisman LeBron James, the Warriors themselves have once again strengthened. They already had a solid bench, and now they have strength in depth with all areas covered, and this is something that no side in the NBA is currently capable of competing with.