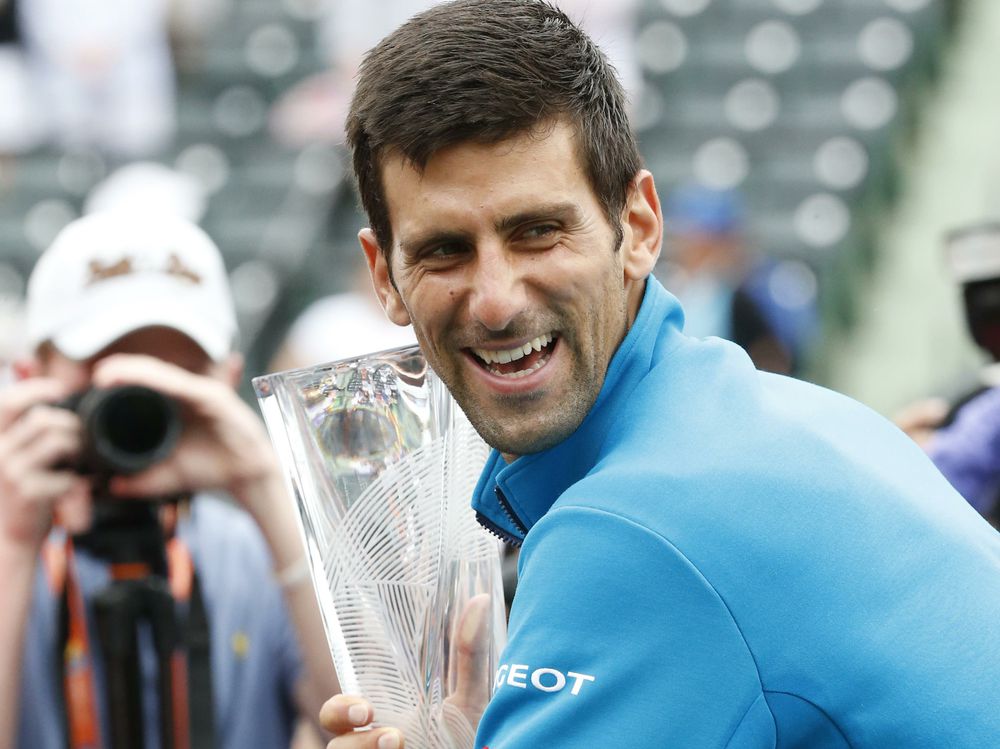 Novak Djokovic won the Miami Masters on Sunday, defeating Kei Nishikori 6-3, 6-3 in the final. The Serb broke another record with his title as he now stands alone for Masters Series 1000 tournament victories at 28. It’s clear that there really isn’t anyone on tour at the moment that can challenge the World No. 1 – although perhaps the clay-court season will change that.

Djokovic’s season so far rivals the start to his 2011 season. Back then he went undefeated up until the French Open semifinals. This season, he has suffered a loss, but it was a loss via retirement as he had an eye issue mid-match against Feliciano Lopez in Dubai. He has won every other match, rarely dropping a set to the competition. In fact in Miami and Indian Wells combined, there was only one lost set for the Serb – otherwise, his sheet was clean.

Djokovic commented after the final against Nishikori:

“Every year that I come back to Miami I do go through…memories from back in 2007. It was the first Masters 1000 I won and opened a lot of doors for me. It gave me a lot of self-belief. I started to realize that I’m able to win the big trophies and to beat the best players in the world.”

The Serb continued: “So, of course, this is a [special] place for me to come back to, now winning it six times. Obviously, I don’t take any win for granted and especially in the big ones. So it was my best performance of the tournament. It came at the right time against a great quality player.”

With the clay-court season looming Djokovic now has more than double the ranking points of the World No. 2, Andy Murray. Monte Carlo, Rome, and Madrid will be played ahead the start of the 2016 French Open, a tournament that Djokovic needs to win in order to complete his career Slam.

However, tennis fans that are big on Djokovic doing just that need to be reminded of what has happened to Djokovic at Roland Garros in the past. Even in years when his level of play has been distinguished, surprise results have found the Serb at the Paris Slam. Last year’s loss in the final to Stan Wawrinka is a case in point, but there’s plenty more to look at when it comes to follies for the Serb in France. Philipp Kohlschreiber beat Djokovic in 2009; Jurgen Melzer beat Djokovic in 2010 after trailing their quarterfinal match 0-2, and Roger Federer ended Djokovic’s undefeated season in 2011.

Djokovic has looked as strong as he looks right now only to see Roland Garros go by the way. Clearly, heading into the clay-court season, there’s all to play for.

On the women’s side, Victoria Azarenka won Miami, claiming the Indian Wells/Miami duo. Her championship result was at the expense of a resurging Svetlana Kuznetsova, a former French Open champ that should be interesting to watch in the upcoming months.

Azarenka has to be mentioned as a candidate to supplant Serena Williams as the World No. 1 this season, something that can’t happen overnight, but might only be a few months off. Williams won both the French and Wimbledon last season, so that leaves her some points to defend this season. With a title in either Paris or London, Azarenka could come close to the World No. 1 ranking.

Up next on the women’s tour, there are a couple minor events in Poland and Charleston. The event in Poland will hardly feature a star as Agnieszka Radwanska has pulled out with a shoulder problem. However, Charleston looks like a very competitive event with Angelique Kerber, Belinda Bencic, Venus Williams, and Eugenie Bouchard in the mix. On the men’s calendar, John Isner will be in Houston while Borna Coric will contest a draw in Morocco.