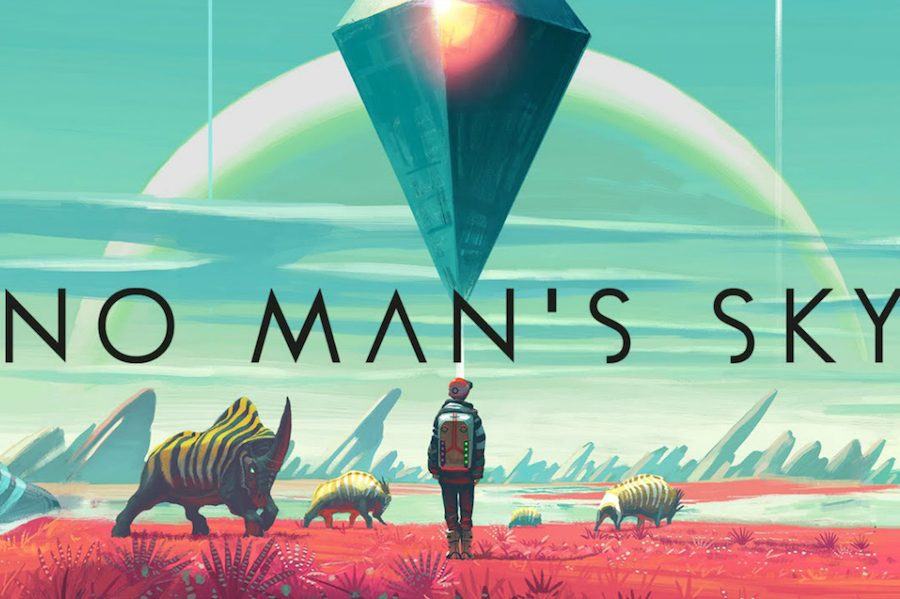 Despite feeling slightly barren in its core features, “No Man’s Sky” is well-populated in environments and fun. Space-exploration fans will find a lot to enjoy.

Long before its release, “No Man’s Sky” made quite the impression with gamers. Developed by Hello Games, a team of about fifteen talented individuals, the title holds the distinction of having some eighteen quintillion planets within its universe (all are entirely unique), despite taking up just six gigabytes or so on disc. The self-generating formula that makes the game possible intrigued many and frustrated others. An air of mystery behind the specifics of No Man’s Sky further amplified the anticipation, and to say that Sony was able to relax their marketing tactics without sacrificing results would be an understatement.

Now, “No Man’s Sky” has released on the PS4 and the PC (three days later than the console version), and many doubts have been settled, questions answered, and opinions finalized. Still, a sizable number of gamers are on the fence with regard to the title; fan reception has been mixed, critical reviews unclear, and the normal indications many interested, but not completely sold, gamers utilize before making (or choosing not to make) a purchase are nowhere to be found. Hopefully, this review will provide some additional clarity for those stuck in the no man’s land between buying and not buying No Man’s Sky.

Players assume the role of an unnamed individual on a quest to traverse the galaxy. Before it came out, the story element of No Man’s Sky was one which many questioned; few details relating to the single-player campaign were ever made clear. To be sure, I had been following the title for some time, but as I popped the disc into my PlayStation for the first time, the realization that I didn’t fully know what to expect suddenly dawned upon me. 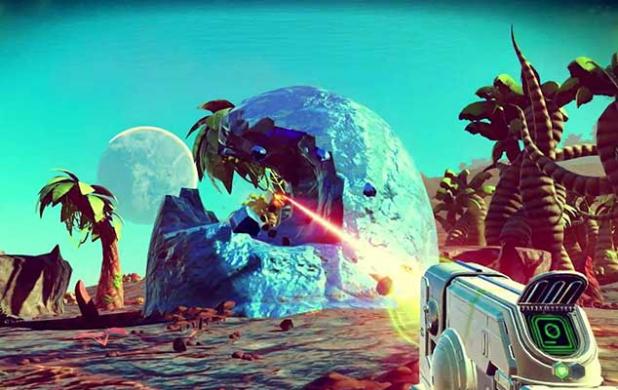 To further preserve the sense of mystery that Hello Games worked so hard to protect, and to assure that you too fly into No Man’s Sky completely “fresh”, as Frank Costanza prefers, I won’t mention the story specifics. I will, however, highlight its broader properties, to further distinguish exactly what it is and is not.

No Man’s Sky isn’t a mission-based exploration title, nor is it centered around combat or character interactions (although it does include the latter two elements). Furthermore, the game also isn’t a story-heavy, cinematic, tear-jerking masterpiece like so many wanted it to be. Largely, No Man’s Sky stays true to the general principles of space, from its gameplay to its story and everywhere in-between. In terms of its story, this means that drama simply cannot exist. Unlike the movies, the main character cannot cry and feel blue—the ship likely needs fuel, enemy Sentinels may be inbound, and there’s a reasonable chance a devastating storm is eminent. While ambushes and combat situations do arise, players are much more likely to be searching the galaxy without disruption than not. It’s just a vast, vast universe.

What No Man’s Sky does focus on is exploration, travel, and discovery. While this was a given based upon the astonishing number of planets featured, it’s truly driven home when one actually visits these areas. 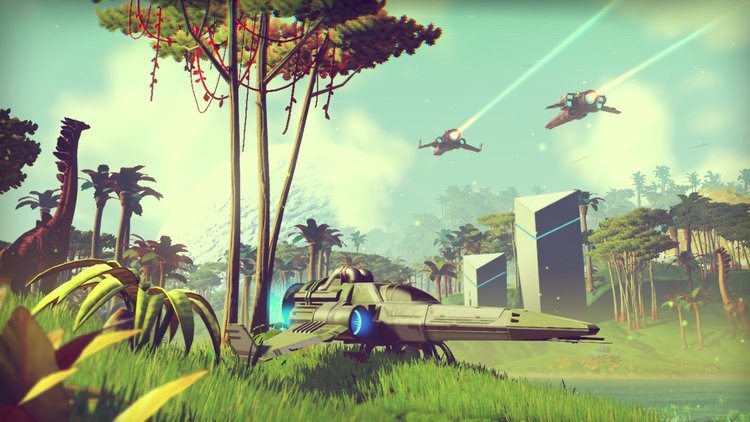 Each planet contains different weather patterns, elements, landscapes, security levels, and atmospheric characteristics. These specifics are important, as they in turn, produce very intricate, detailed, and plainly gorgeous plants and animals, which can be scanned, named, and enjoyed (or in more aggressive instances, battled). To further amplify the intrigue here, various alien lifeforms also populate planets. From barren deserts to lush forests and from irradiated hellholes to freezing-cold snow rocks—and a whole lot of other planet types—you’ll never know exactly what’s in store for you until you land and travel on foot. No Man’s Sky’s graphics are marvelous too. VR isn’t necessary to feel truly immersed in breathtaking views and while speaking with slightly gross alien lifeforms.

Besides being fun and rewarding based only upon the diversity of each planet’s contents, travel and exploration are encouraged in other ways. Collecting resources to build upgrades for one’s weapon, suit, and ship, and to create fuel, are additional factors to consider, as are meeting aliens, learning of species which once inhabited an area, and scanning new plants and animals with a discovery visor. These scanned lifeforms (and planets, and more broadly, galaxies) can then be renamed and uploaded into a universal database. In-game currency is provided for such discoveries, and if another player should stumble upon a galaxy or area that’s already been searched, the name of the land’s pioneer will be displayed. Only a game as humongous as No Man’s Sky could integrate such permanent measures.

The gameplay of “No Man’s Sky” makes exploration a joy. Admittedly, a character that’s hard to control would have put a real damper on most every aspect of the title. Luckily, no such navigation difficulty will be found. On-foot movement is straightforward, and an upgradable jetpack assures players won’t become bored—or be denied access to remote areas—while traversing planets. By and large, space flight is easy and enjoyable; a speed for every destination, be it close or far, is available. Finally, combat works well, both in space and on foot. While weapons and attack techniques aren’t particularly diverse—especially in flight—they are effective and easily usable, with a bit of practice.

In other areas, “No Man’s Sky” comes up short. Despite each planet being truly unique in landscape, atmosphere, plants, and animals, there isn’t very much diversity at all in specific core features. For example, buildings and rest areas, on any planet, all look essentially identical. The same can be said of Sentinels, the law-enforcement robots waiting to give hell to anybody abusing their planet’s resources. They look the same, they fly the same, and they attack the same—except in their two more advanced stages, which ultimately become predictable as well.

The difficulty of the title also becomes an issue as reasonable exploration efforts are made. Originally, being assaulted by Sentinels or in-air pirates is a heart-racing test of one’s skill and endurance. After a while, however, when your own upgrades inevitably surpass those of your dim-witted enemies, “battles” become walks in the park. Once discoveries come pouring in along with new materials, No Man’s Sky’s opponents fail to reinvent themselves. 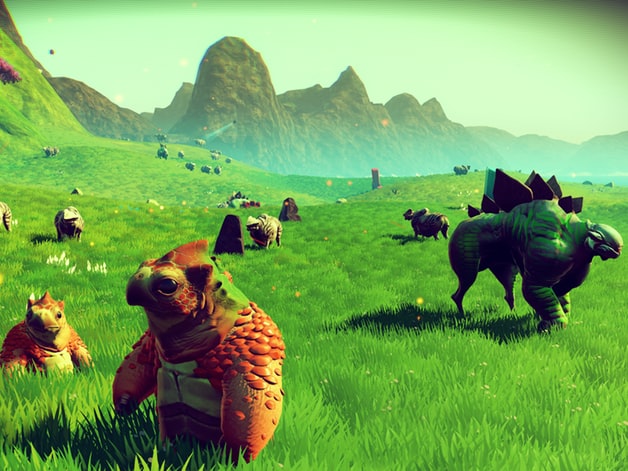 But, the planets of “No Man’s Sky” are essentially limitless. Should other gameplay elements and minor environmental details be expected to keep pace? If so, how could they?

As was mentioned initially, critics and fans alike have been split on their feelings of No Man’s Sky. In most instances, on both sides of the spectrum, individuals are very opinionated—they either hate the game or they love it. This is because of their expectations heading in—not the software’s content.

Those looking for a cinematic, story-based, Gravity and The Martian-esque video game should look elsewhere—and that isn’t meant meanly or maliciously. No Man’s Sky just doesn’t fit the bill. But, those who have always wanted to explore space—those who looked up at the sky with wonder in their youth and in their adult years—shouldn’t hesitate to make the purchase. No Man’s Sky is a monumental technical achievement that provides enough to see for several lifetimes.