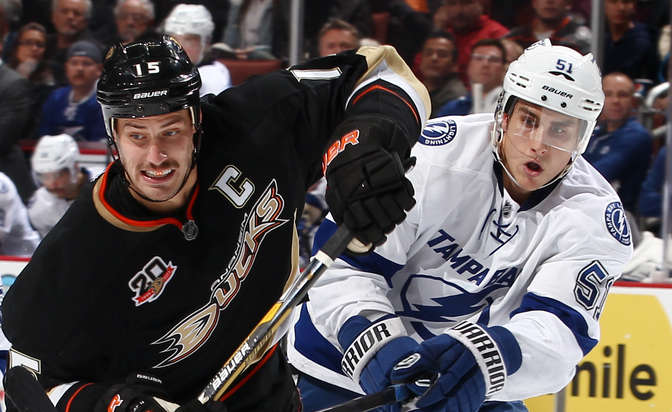 The NHL won’t be all that busy on Friday night as the league will feature just three games. In Columbus Edmonton will look for their fourth straight, in Washington the Rangers will look to gain some confidence ahead of the playoffs, and in Dallas the Stars will host the New Jersey Devils. Saturday does feature a more compact schedule than Friday including an important game between the Anaheim Ducks and the Los Angeles Kings.

The Ducks and Kings enter this weekend all tied up in the standings when it comes to the Pacific Division. Each team has managed 80 points in the standings in 63 games, the Kings holding the tiebreaker at the moment. With 19 games to go, Saturday afternoon’s game (1pm PT) won’t settle anything, but both teams will be keen on taking the lead and the game promises to be fiercely contested.

Whereas the two teams are tied in the standings right now, they got their 80 points at very different times this season. Los Angeles were fast out of the gates in 2015/16 while Anaheim were a terrible team in the early parts of the season. The Ducks have turned things around of late and they have rattled off an amazing ten straight to surge into the position that they are now in.

The only team that is comparable to Anaheim in terms of recent wins is Tampa Bay. The Lightning have won eight straight and they are also tied in their division for points. Florida and TB each have 80 right now with the Lightning holding the tiebreaker. Boston are a couple points back of each team, having played an extra game on the season thus far.

The Lightning and Panthers will not play one another this weekend, however they will both be in action on Saturday night. Tampa Bay will host Carolina in a game that starts at 7pm ET. Later on, Florida will be in Arizona to take on the Coyotes, a team that has lost seven straight to all but eliminate itself from serious playoff consideration. By most regards, it looks like Florida and Tampa Bay will remain tied after Saturday. However, the Panthers have looked so average of late that, between the two, you would more expect the Panthers to lose.

The Central Division is amazingly tight as well with Chicago and Dallas both sporting losing records in their last ten games. St. Louis haven’t been unbelieveably hot, however a 7-3-0 record in their last ten has shot them into contention for a divisional title. Even Nashville is hot in the Central, a team that is looking like a dangerous low seed for the 2016 Stanley Cup playoffs.

The Predators will travel to Colorado to face the Avs in a Saturday-afternoon game, once that starts at 3pm ET. Both teams are competing for Wild Cards at the moment, with Colorado in desperate need of victories to stay close to the Minnesota Wild.

But not all of the races are close as the Washington Capitals can start talking about clinching their division soon. The Caps lead the Rangers by 18 points in the standings and it would take a miracle for them not to have home-ice advantage all through their upcoming playoff series. Besides their Friday-night game, Washington will also play on Saturday as they face Boston in a game that starts at 7pm ET.

There is just over a month to go in the NHL season, the last games to be played on April 9th. At this point teams generally have about 17 to 19 games left in their schedules to make their pushes, either for playoff qualification or a good seeding.