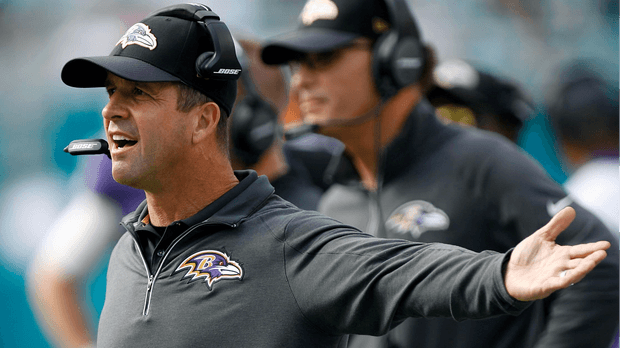 The Baltimore Ravens are forced to forfeit one week of organized team activities (OTAs) and pay a $343,057 fine after the NFL busted them this week for violating offseason workout rules under the latest Collective Bargaining Agreement. Head coach John Harbaugh was also slapped with a $137,223 fine.

“We made a mistake, and we are sorry for that,” said the Ravens in a statement. “We accept the NFL discipline.”

It turns out the Ravens went full pads during a rookie minicamp which took place earlier this month. As a result, the Ravens will be without three of their 10 permitted OTA sessions this offseason. This situation is the Ravens second run in with the NFL and CBA law since 2010.

“What they decided was appropriate,” said Harbaugh in the aftermath. “We’ll respect that. The only thing I can say about that is the same thing I told the players. And I told the players there is not one guy in the room, coaches the same thing, there’s not one player or one coach in this room that should worry about it for one second, shouldn’t have any anxiety about it cause it’s on me. It’s completely me. It was my decision, my effort, and that’s the situation we’re in.”

At least Harbaugh is man enough to admit when he’s wrong. The hefty fine shouldn’t come as much of a surprise, as Harbaugh has been an opponent of the offseason rules for a while now, going as far as to call them “un-American.”

It must run in the family as his little brother, Michigan head coach Jim Harbaugh, was a similarly passionate opponent of the satellite camp ban that the NCAA put in place. The ban was subsequently overturned.

“In some ways, maybe the rest would be good for us,” said Harbaugh, looking on the bright side. “Kind of the way I look at it. I told the guys I’m pretty sure that I wouldn’t afford giving our guys some time off after all the six weeks of hard work. Maybe the good Lord is looking down and giving us what we need right now.”

Who knows, maybe the players were praying for it.