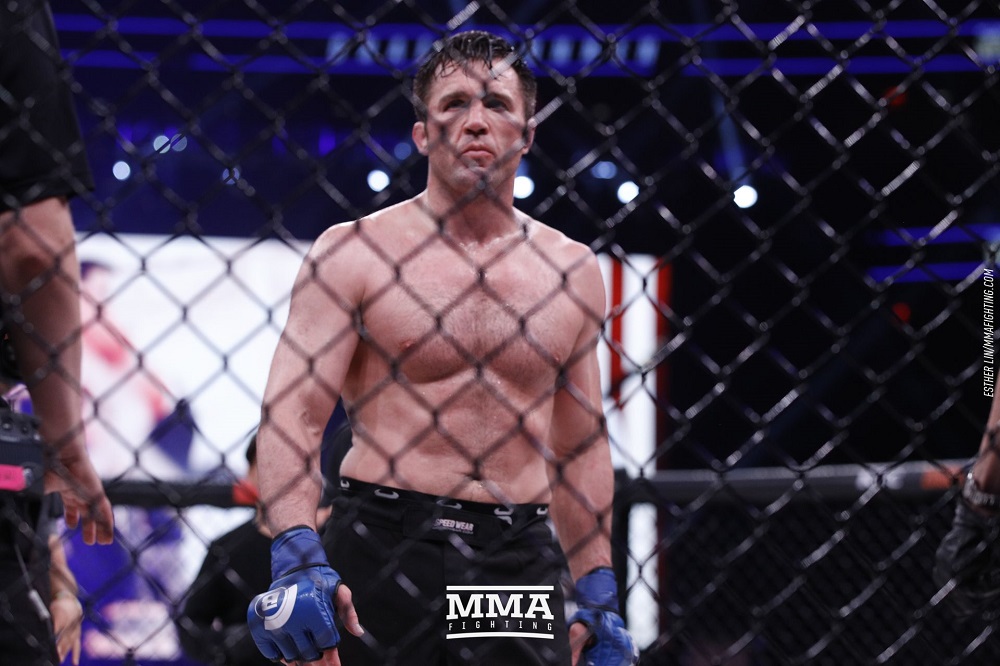 One of the longest running rivalries in MMA was brought together on Saturday between Chael Sonnen and Wanderlei Silva. Sonnen was able to claim the victor in this bout.

Chael Sonnen took out one MMA legend, called out another, then unloaded his misery about fighting at Madison Square Garden.

“I hate New York,” he bellowed in the cage.

#BellatorNYC ends with @ChaelSonnen as the winner & here's what the 'Bad Guy' had to say! pic.twitter.com/IkfeaZoA1z

Sonnen won on the scorecards, if not the adulation from MSG fight fans, and took a unanimous decision over Wanderlei Silva in a much-delayed grudge match in a light heavyweight bout Saturday night.

It was a dreadful night for Silva and fellow MMA great Fedor Emelianenko in Bellator’s MSG debut. Matt Mitrione knocked out Emelianenko in just 74 seconds in a heavyweight bout.

But the result didn’t stop Sonnen from challenging Emelianenko to another bout somewhere down the line. Bellator must love the gimmick of putting a pair of 40-somethings in the main event of a future card. 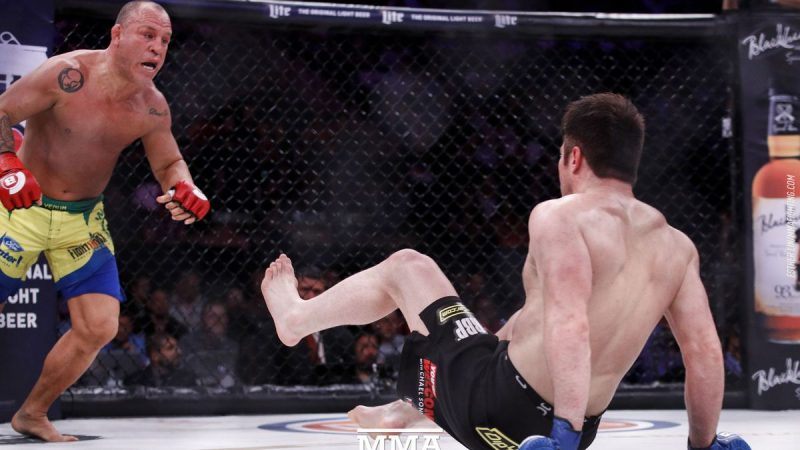 “I respect Fedor, and I think he and I’s paths are going to cross sooner rather than later,” Sonnen said.

Emelianenko, following his first fight in the United States since 2011, said he would not retire.

Sonnen and Silva had feuded – and even brawled in street clothes during a taping of an MMA reality show – for years and had an anticipated bout for a UFC pay-per-view scrapped in 2014. Sonnen (29-15-1) pressured Silva and stayed on top of the MMA great for most of the three rounds. Sonnen, who can self-promote with his mouth as well as anyone in the game, was dropped once but never in any serious trouble.

Silva, also 40, made his name fighting for Pride in Japan and made his Bellator debut following a nearly four-year layoff. Sonnen was choked out by Tito Ortiz in his Bellator debut in January. Ortiz was on hand at the Garden and egged on fans who cursed him out during the main event. 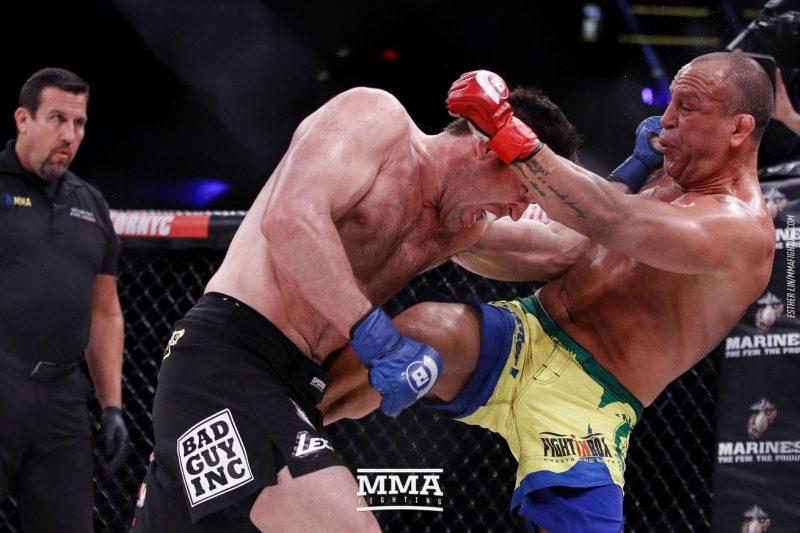 Mitrione (12-5) and Emelianenko both connected on right hands and hit the canvas for a double knockdown in the co-main event. But Mitrione, who briefly played in the NFL, pounced and smashed Emelianenko (36-5) with uppercuts to finish off the Russian great.

Emelianenko, maybe be the greatest fighter to never sign with UFC, had won his last five fights, but the days when he ruled in Japan as one of MMA’s most dynamic fighters and top heavyweights are well behind him. Emelianenko, in his Bellator debut, was bloodied and looked well past his prime.

Bellator, the No. 2 MMA promotion in the United States, made its MSG debut seven months after UFC christened the arena in the MMA genre with a record $17.7 million gate.

Bellator will wait to find out if the pay-per-view buys (at $49.95 a clip) hit 200,000, the total the company aimed for to count as a major success. Bellator broadcast on pay-per-view for only the second time in promotional history, signaling another step in its growth as a rival for the industry-leading UFC. Bellator staged its only previous pay-per-view event in May 2014, shortly before CEO Scott Coker took over the promotion. 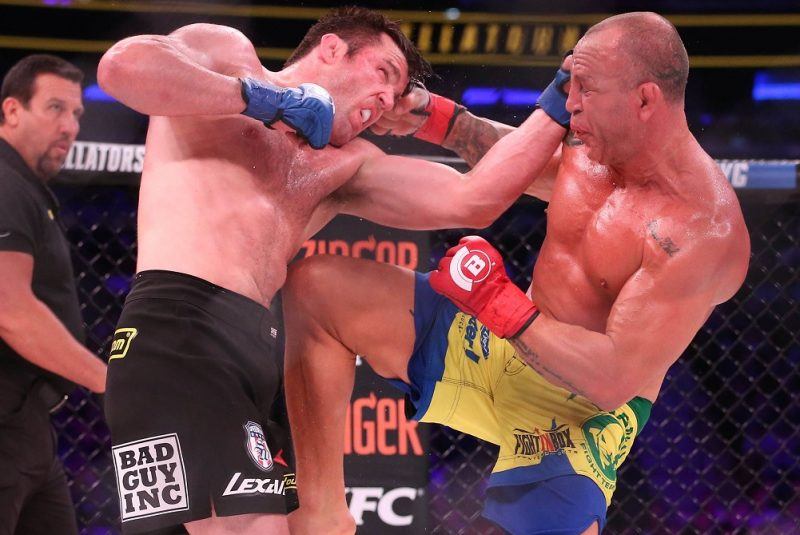 Bellator loaded the card in front of 12,133 fans with some of the biggest names in MMA to make a splash in New York. In a sign Bellator craves star power over super bouts, neither of the two main events were for a championship.

But there were title fights on the card, highlighted by Brent Primus defeating Michael Chandler in a gruesome fight to win the 155-pounds title. Chandler, one of the Bellator stalwarts, broke his left ankle and the fight was stopped in the first round.

“Cut it off! Cut this thing off! I’ll keep going!” he barked in the cage.

If the loss wasn’t tough enough, like a bad practical joke, the injured Chandler had his stool pulled away in the corner as he tried to sit and the fighter fell on his bottom.

Ryan Bader defeated Phil Davis by split decision in his Bellator debut to win the promotion’s light heavyweight championship. Bader (23-5) defeated Davis (17-4) in an MMA bout for the second time in his career in a lackluster bout filled with more boos than blows. Bader had edged out a split decision victory over Davis when the former Division I All-American wrestlers fought for the first time on a UFC card in January 2015.

Bellator, founded only in 2008 and named for the Latin word for “warrior,” has failed to build that mainstream star that UFC has in the mold of Ronda Rousey and Conor McGregor. Bellator has eschewed the PPV model and built its fan base on the strength of live TV cards on Spike (broadcast home of Saturday’s undercard) and by signing past-their-primetime MMA players to the main event their biggest cards. Kimbo Slice, Ken Shamrock, Royce Gracie and Rampage Jackson all took their turn in main event bouts more spectacle than sport that delivered record ratings for Bellator.

Aaron Pico, 20, was widely considered the top MMA prospect around and had advanced to the U.S. Olympic Team Trials in wrestling last year. His breakthrough will have to wait. Zach Freeman made Pico quit in just 24 seconds and stunned the crowd that had fallen for the hype.

Heather Hardy, a boxer signed under promoter Lou Dibella, won her professional MMA debut with a bloody TKO over Alice Yauger. Hardy, of Brooklyn, New York, had the crowd going wild when she dropped Yauger with a vicious right. Hardy suffered a deep cut over her left eye following an accidental head-butt. Even the crowd gasped when blood gushed down Hardy’s face. Hardy wiped it off, then wiped out Yauger while the crowd roared.