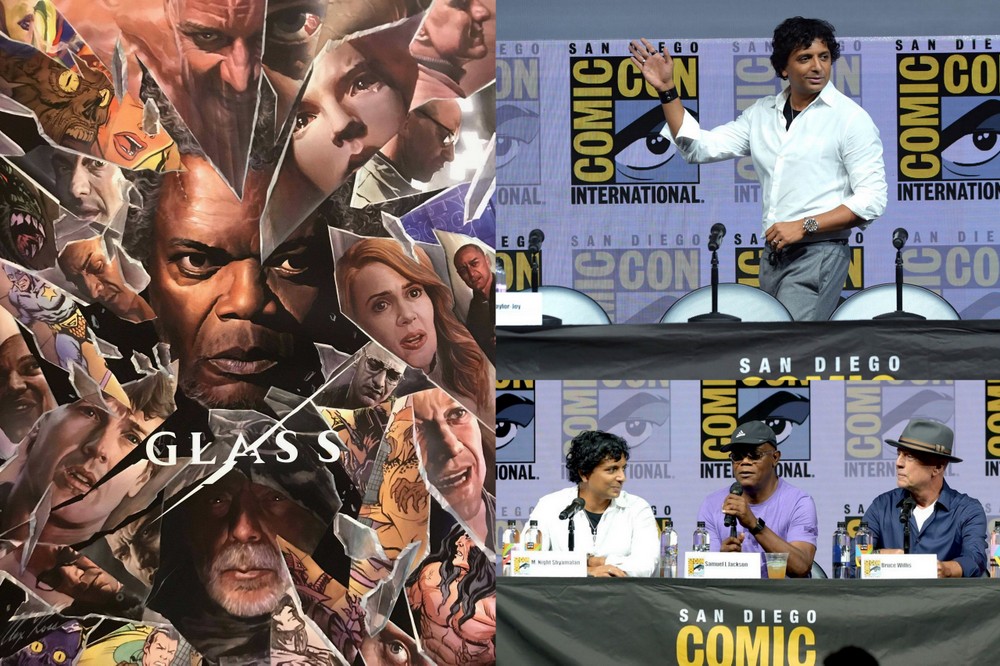 I enjoyed every panel I was lucky enough to attend at Comic-Con this year, but there were a few that I was more excited about than the others. One was for my favorite show, Supernatural. The other was for the upcoming film Glass, which will be released on January 18, 2019.  I’ve known M. Night Shyamalan since before the days of The Sixth Sense, both of us calling Philly our hometown, so following his career and witnessing its twists and turns has been an emotional rollercoaster at times. 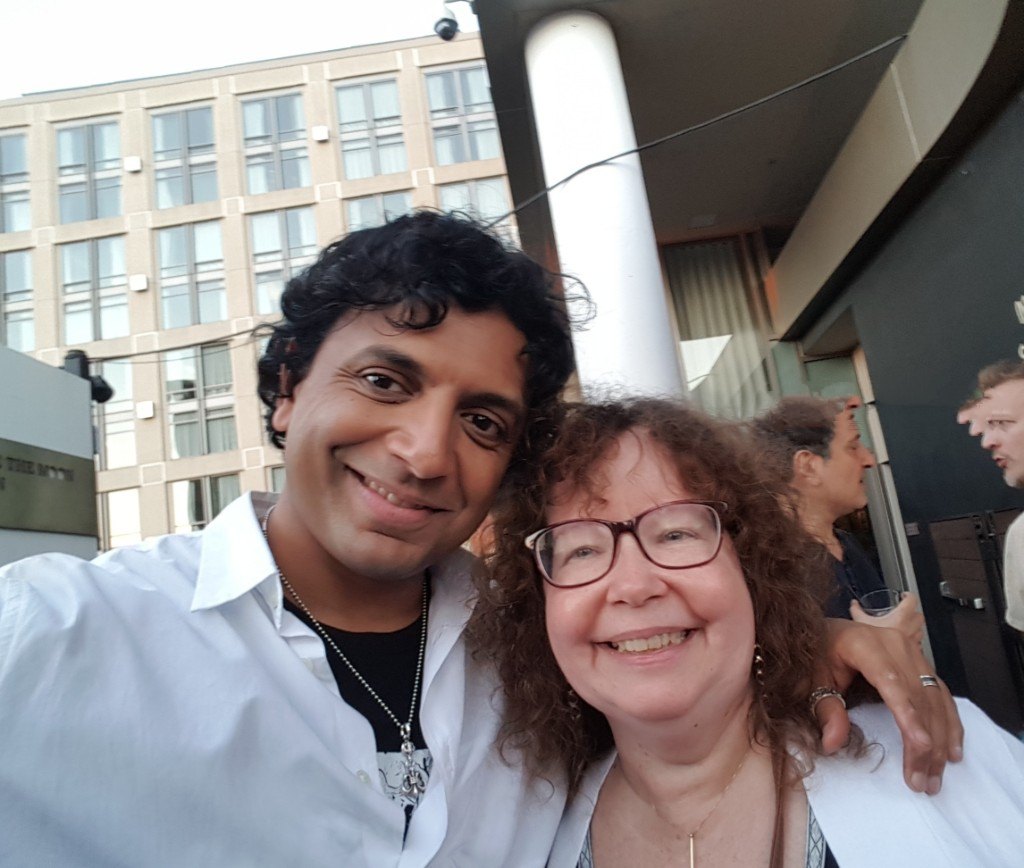 Unbreakable has always been one of my favorites of Night’s films (and not just because my daughter was in it – as an extra who ended up on the cutting room floor). I remember back then when he said he was going to make a comic book movie – I was probably more excited than most people he knew, because I was a genre fan and a passionate fangirl and what could be cooler than that? I remember watching a rough cut of the film and how blown away I was by the premise and by Samuel L. Jackson’s and Bruce Willis’s incredible performances.

I was going to Comic-Con long before Night made his way there, so he’s heard about it for a long time and read about it in my books – it was fun to see him introduced to the insanity while there for Wayward Pines and later to premiere The Visit. This year, after the tremendously successful film Split turned out to be a sequel of sorts to Unbreakable, Night was back at Comic-Con for Glass – in the gigantic Hall H!

Yvette Nicole Brown moderated a panel which included Night along with stars Samuel L. Jackson, Bruce Willis, Anya Taylor-Joy and Sarah Paulson.  Shyamalan was boyishly excited about being in Hall H, saying he had dreamt about being in this hall forever.

Night: I live in Philly, so I just hear about “Hall H, Hall H.” This is the Mecca right here.

(I feel like that might have been partly me going on and on about Hall H, but hey, it IS sort of Mecca!)

He talked a bit about the long history of the Unbreakable-Split-Glass films, remembering that when Unbreakable came out, there was a mixed reaction to the film. People were expecting a sequel to The Sixth Sense since it was Night and Bruce Willis again, and so that mixed reaction was disheartening a little.

I can testify to how excited he was about making Unbreakable – and at the time, how unusual it was to want to make a “comic book movie.”

Night: As we were talking about marketing the movie, I was on a conference call with the studio, and I remember they said ‘we can’t mention the words superhero or comic book, because it’s too fringe – it’s those people who go to those conventions.’ That was literally a quote.

The audience groaned, and Shyamalan reflected on his own confusion at the time, because that’s precisely what the movie was. And he definitely knew more than one person who ‘went to those conventions’!

In hindsight, Unbreakable was a bit ahead of its time.

Fast forward to the present, and Night remembering that he had put aside an idea he’d had long ago – the Kevin Wendell Crumb character from Split was actually in the script of Unbreakable. It was too unwieldy at the time, so he took those pages out, but when he was doing The Visit and came to Comic-Con to show it, he thought maybe he could revisit the character – which became the film Split.

Night: I asked Disney if we could maybe do something special at the end of Split, and Disney was gracious and let me do that. It’s really the most unusual thing you could imagine, with two studios, with two different IP’s, it just doesn’t happen.

Night has always had the guts to attempt unusual things, and this time it paid off.

Shyamalan had lots of love and gratitude for the gathered fans, and a clear fondness for Comic-Con and what it encompasses.

Night: I have such gratitude for you guys, at every level. Even for Unbreakable, it’s you guys who embraced it and understood it, and then everyone else caught up to you guys. And Split as well, so I’m incredibly happy to be here.

He also told an amusing story about coming to Comic-Con for The Visit a few years ago. He had already written Split, but he didn’t know who could possibly play the demanding part of the lead character.

Night: I was at a party and James McAvoy walks by me, and I grabbed him and said “hey, I love your stuff” and he said “hey, I love your stuff!” He had just finished X Men and his hair was like ¾ inch long – and I was like, this is the guy, and this is how he should look in the movie. So really, Split was created right here at Comic-Con, which is just how it should be.

McAvoy was ill and unable to attend the panel, unfortunately. Anya Taylor Joy and new cast member Sarah Paulson were on the panel, and then Night introduced Bruce Willis with genuine emotion.

Night: This was very special to me because he’s basically my big brother – the first guy who believed in me and gave me a chance on The Sixth Sense – Bruce Willis.

Willis got a huge ovation from the giant Hall H crowd, as did Samuel L. Jackson, who returns as Mr. Glass in the new film.

Jackson said that he loved the complexity of Elijah, that he’s a strong character with a fragile body but a strong mind, and loves that he has a belief that’s stronger than anything anyone can take from him. 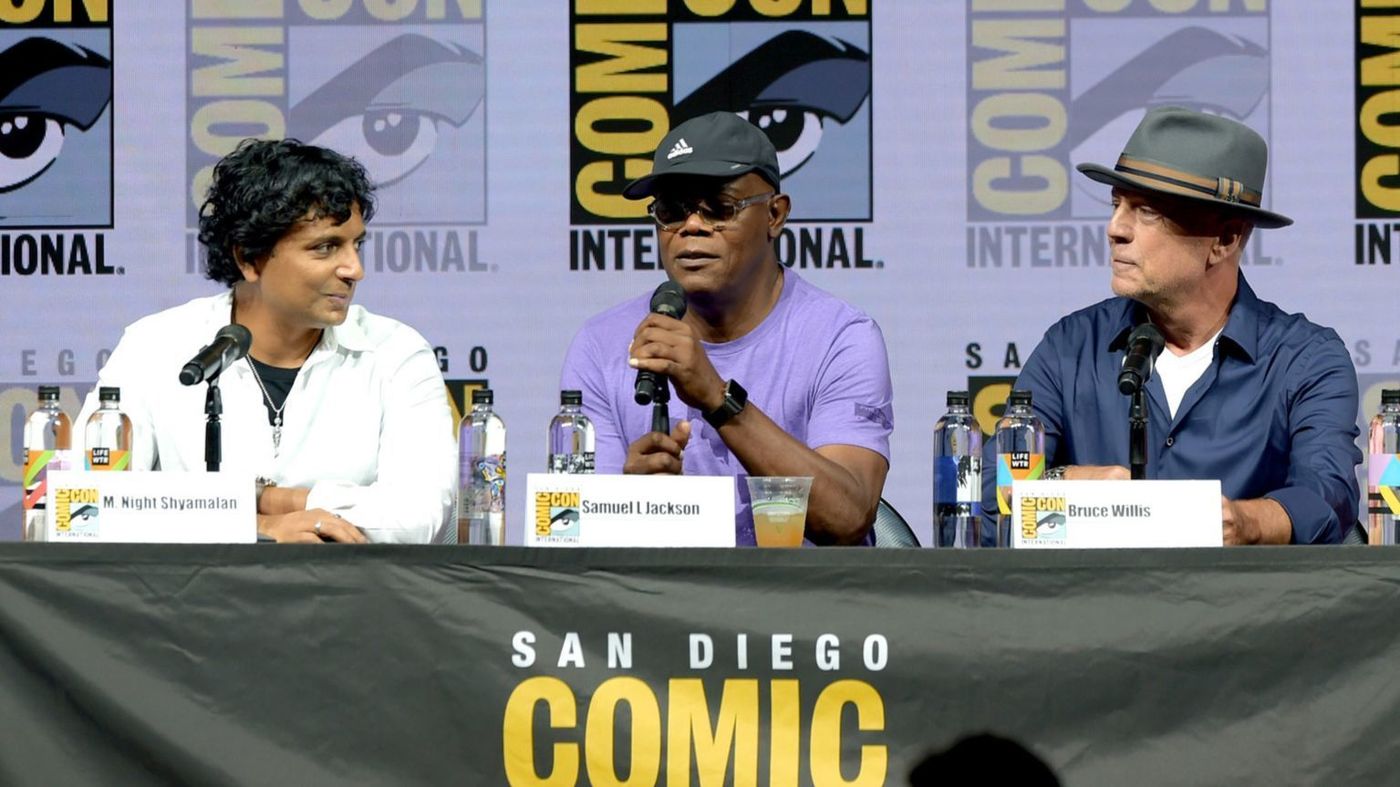 Jackson: See, I don’t actually play the same mutherfucker all the time!

The moderator asked Bruce Willis how Night enticed him to join Split at the end?

Willis was cagey, saying that there are a lot of secrets in this movie that haven’t been exposed.

Night: But basically I just called him and asked him, and he said yes. It was super gracious of him, he came and did it for nothing. I realize that everything I’m saying is not realistic, but he’s always been my big brother.

Sarah said they filmed in the coldest place she’s ever been in this cavernous abandoned mental hospital, but the cold actually worked for her character.

Anya:  It was such a pleasure to come back and tell the continuation of my character’s story.

Night had some heartfelt words for all the cast.

Night: I just wanna say, to do movies the way I try to do them, shooting them at home and very small – these guys could do any movie they want, and we do films very intimately, like she mentioned the cold… it’s almost like film school, and that requires incredible commitment. It’s hard to give yourself over to a storyteller and make yourself that vulnerable. All of them, and James… I get emotional just talking about it, so thank you all so much.

We were also treated to a viewing of the trailer for Glass — a world premiere.

Night: We had the ability to put this trailer with some of the big Marvel movies, but I felt very strongly that you guys were the ones who should see it first. It was always meant for you guys, this whole series.

The screaming went on for a long time afterwards, because the trailer is freaking amazing and I cannot wait to see the whole film!

There were lots of shout outs to my hometown of Philly, where Night makes all his films. He was hard pressed to fit his films into a single category.

Night: I’m trying to do these intimate character-driven movies but I balance that with the pressure of the ride. My wife always says why don’t you pick one or the other, but the movies I fell in love with like ET had a bit of everything.

Essentially it’s a comic book movie and a thriller slammed together.

The moderator asked, what’s different about Glass? Why should people want to see it?

Night: The reason to come see the movie is the performances of the people up here and from James McAvoy. I think you’ll agree when you see it, the performances are jaw dropping, and I’m very very lucky.  Right now in the editing room, James does 21 personalities.

Night has never wanted to play things safe – he essentially made Split into a sequel to Unbreakable without letting anyone know that it was a sequel, which is exactly the way most franchises sell their sequels.  He didn’t have any idea that it would work out, and in fact, it’s unprecedented that two studios cooperated and helped each other out by letting Bruce Willis’ character appear in the end of Split.

Having seen the trailer and knowing how excited Night and the cast are about Glass, I fully expect this film to be just as unique and just as surprising.

Back in Philly, I asked Night what was his favorite thing about Glass, after the long long journey to get to this place. 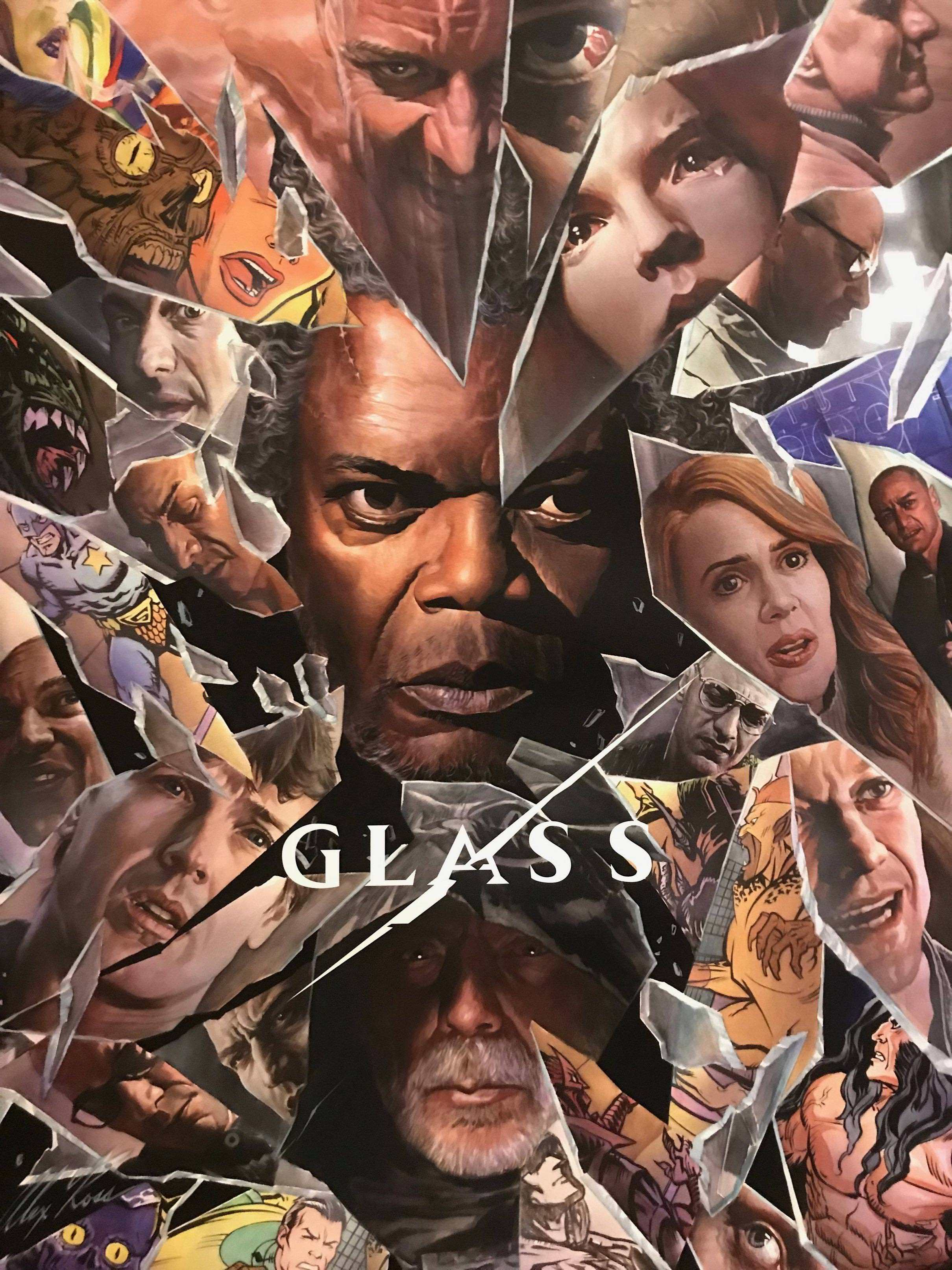 Night: Glass represents an entire section of my filmmaking life. It’s characters from two previous films and now characters from a third all together. I know these characters so deeply that everything they say and do feels personal to me.

Night’s films have always created characters that are unique and memorable – and yes, feel personal.

Night: Glass represents that continual struggle of wanting to entertain and at the same time do something personal. Film has given so much to me. I want to treat every moment of the making of it with respect. I’ve tried to do that with Glass.

From what I’ve seen and heard so far, I think he’s succeeded. Be sure to catch the premiere of Glass on January 18, 2019!