World No. 5 Kei Nishikori pulled out of his second-round match at the 2016 Rakuten Japan Open in Tokyo on Wednesday. The loss of the top-ranked Japanese player in that country’s biggest event is certainly a major setback for tournament organizers. The injury, which is to his left glute, adds to Nishikori’s lengthy medical history.

Earlier this season he had a rib problem that caused him to pull out of the 2nd round of the Gerry Weber Open, a tournament that was part of the Wimbledon build-up. At the All England Club, Japan’s top player appeared to still be bothered by the same injury as he withdrew from his fourth-round match against Marin Cilic.

At Wimbledon in 2015, it was more of the same as Nishikori withdrew from that edition of the grass-court Grand Slam with a calf injury. That setback wasn’t exactly out of the blue either as he pulled out of the semifinals of the 2015 Gerry Weber Open with the same problem.

Going way back to 2008, long-time tennis fans will remember when Nishikori originally broke onto the scene. At the age of 18, he made a run to the fourth round of the 2008 US Open, defeating then fourth-ranked David Ferrer en route. Nishikori truly looked like a player to watch when he won 2008’s Newcomer of the Year award. 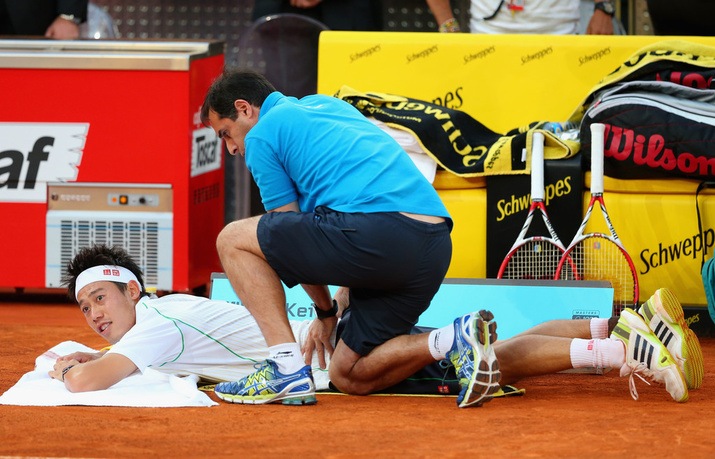 However, the first real glimpse of injury problems emerged soon thereafter. The Japanese player would only contest 10 tour-level matches in 2009 because of an injured right elbow. When he returned to tour full time in 2010 it wasn’t exactly smooth sailing from that point on. He lost via retirement that year at both ATP Eastbourne and the US Open. Since the start of 2011, he has either given up a walkover or lost via retirement on 13 occasions, including in big matches like the 2014 Madrid Masters final (back injury; l. to Rafael Nadal).

Nishikori certainly isn’t made of glass as you don’t get 11 tour-level titles, a Grand Slam runner-up, and a career-high ranking of World No. 4 without some endurance. But the current World No. 5’s body hasn’t held up often enough to allow him to yet make a serious run at the World No. 1 ranking.

Nishikori, who said he couldn’t “believe what happened” when he lost in Tokyo on Wednesday, is now questionable for the 2016 Shanghai Masters in China. With calf problems, back problems, rib problems, elbow problems, and now out-of-the-blue glute problems in his history he’s a very unpredictable player. With 11 titles and 13 walkovers/retirements since 2011, Nishikori wins tournaments about as often as he pulls out of them.

At the age of 26 and with all players ranked above him significantly older than him, Nishikori remains a player likely to hold the World No. 1 ranking for at least some time in his career in my opinion. However, getting that high doesn’t just require skill but endurance. Japan’s top player has plenty of the former and less than the average amount when it comes to the latter.