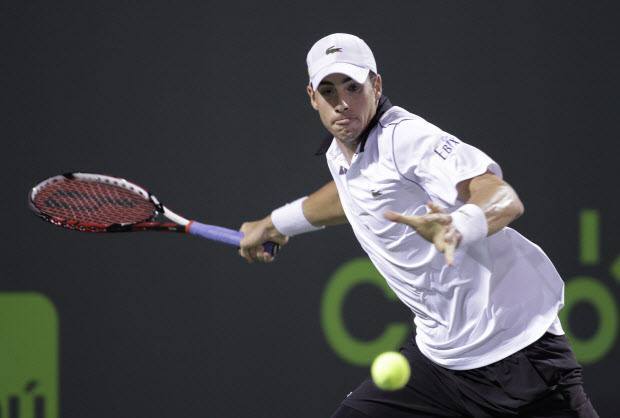 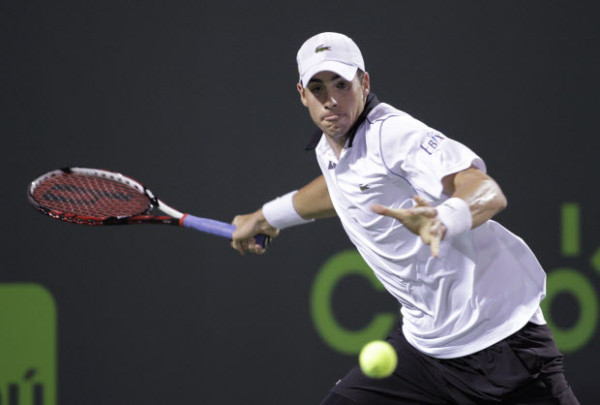 Last night delivered quite a surprise battle at the 2015 Miami Open Masters between John Isner and fifth seeded Milos Raonic as the two fought it out over three sets. It didn’t hurt Isner that he’d encountered the Canadian tennis star twice before which ended in his favor, but it was quite the battle to watch.

John Isner won a battle of two of the sport’s biggest servers Tuesday night at the Miami Open presented by Itau.

The pair’s third match in their FedEx ATP Head2Head series did not feature a break of serve and ended at 12:39 a.m. local time Wednesday morning.

Isner, the No. 22 seed, saved three break points, while Raonic hit 13 aces and saved one break point in the two-hour and 43-minute encounter.

Isner will next challenge fourth seed Kei Nishikori in the last eight. He has reached five semi-finals (or better) at ATP World Tour Masters 1000 tournaments.

When two of the biggest servers on the ATP Tour meet, especially on the slow hard courts that abound on the circuit these days, there isn’t going to be a lot to sink your teeth into.

In the end, Milos Raonic and John Isner had to try to stay focused through the barrage, and wait for those rare opportunities to make a move.

They played a total of 233 points; only three of them went over nine shots; 179 of them (77 per cent) were over in four shots or less.

In truth, Isner played a little better than Raonic did, although the differences were marginal and Raonic had three break-point opportunities to Isner’s one.

Raonic picked up a little bit where he left off against Jérémy Chardy of France in the fourth round – that is to say, he wasn’t serving well, he looked pretty uptight, and his game overall wasn’t there.

It was just enough to squeak by Chardy. It was almost, but not quite, enough to sneak past Isner, who had a poor start to the season but is now picking up the pace.

Raonic was 13-1 in 2015 when he won the first set; his only loss came to Nishikori at Davis Cup in Vancouver last month, a match he lost in five sets. So when he squeaked out a first set he probably didn’t deserve to win, you had to think he might pick it up from there.

But there was a warning sign – a big one. Until that first set tiebreak, Raonic hadn’t hit a single ace.

His average per match in 2015 had been 17; it took 40 points before he finally got one past Isner without the American getting his racquet on it. And Isner, to say the least, is not known as one of the better returners in the game. Far from it; it’s probably his biggest weakness beyond a bit of a dodgy backhand.

Raonic ended up with 13 aces; Isner had 25. And in those crunch moments in the tiebreaks, he simply was the better player.

Isner, serving second, had to hold serve to stay in the match on two occasions late in the second set. This, he did with few issues.

But in that second-set tiebreak, Raonic quickly went up 3-0, winning both points on Isner’s serve. For someone like Raonic, two mini-breaks in a tiebreak – especially so early on – should be more than enough to win the set and, in this case, the match. But this time, it wasn’t enough.

Isner recuperated those points, and more, as Raonic got only one first serve into play in the last six points of the tiebreak.

After that, fans would probably have preferred the two players head straight to the third-set tiebreak, bypassing the monotony of the set in between. And in the end, that’s where they ended up. And despite the fact that Raonic has gone 8-1 in deciding-set tiebreaks over the last year, Isner won it.

Summing up, it was a good – not great – North American hard-court swing for Raonic, who made a big breakthrough at Indian Wells by defeating Rafael Nadal for the first time and reaching the semi-finals. But the players who go deep at Indian Wells and follow that up with a top-flight effort in Miami immediately afterward are quite rare. That’s something Raonic will look to do next year, with the Indian Wells – Miami double comes around again.

So Raonic’s surprising dip in form through the last part of the Chardy match and again versus Isner can probably be attributed to running out of gas a little bit. It was hot in the California desert; and it’s hot and very humid in Miami.

The Canadian now take a break and begin preparing for the clay-court season in Europe.