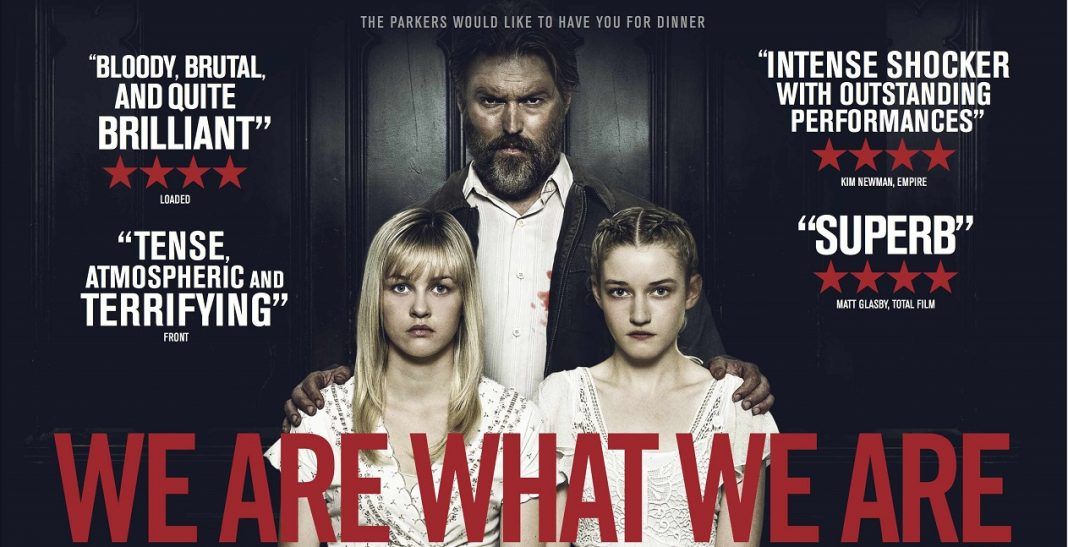 Jim Mickle slowly but surely established himself as one of the most interesting directors in contemporary US horror, from his rat zombie 2006 debut “Mulberry St” to his acclaimed 2010 apocalyptic vampire tale “Stake Land”. As a result, the announcement that his follow-up to the amazing “Stake Land” was to be a remake of Jorge Michel Grau’s Mexican cannibal family saga “We Are What We Are” came as a bit of a surprise. Actually, it was a big surprise.

The on-going horror remake trend of that time had long outstayed its welcome with genre fans and critics. Thankfully, his version of the film is that rare thing indeed; a remake that stays true to the basics and themes of its source material, while adapting it to a different culture and landscape, offering something new and thoughtfully constructed in the process. The DVD release comes with a variety of the usual extras, including a making-of documentary.

The plot relocates the flesh-eating from Mexico to a rundown rural community in the US heartlands, currently in the grip of a torrential rainstorm and dangerous flooding. Kicking off with the death of their mother, the film follows two young girls, Iris and Rose Parker (Ambyr Childers and Julia Garner), who live with their younger brother Rory and father Frank (Bill Sage) in the trailer park he runs. An odd family, kept at arm’s length by the local community due to their strange fundamentalist religious beliefs, the Parkers are harboring a macabre secret, which is slowly revealed after the storm and the efforts of coroner Doc Barrow (Michael Parks) bring to light the reason behind a string of disappearances in the surrounding area.

It’s really a bit unfair to call “We Are What We Are” a remake, as the associations the term conjures definitely do a disservice to what Jim Mickle and regular co-writer Nick Damici have achieved here. While the two films do share the same basic premise, this new version differs in a number of ways, from the structure of the family through its rural rather than urban setting. The changes feel natural and entirely appropriate, and without being overly ponderous or symbolic, the film does a great job of exploring themes of religion, family and American culture and decline.

There’s a lot more going on here than in the average genre film, and as with “Stake Land”, one of Mickle’s greatest talents is to take a potentially outlandish fantasy scenario and to make it believable. Though this is certainly a film about cannibalism and madness, it’s also an emotionally grounded story about family and adolescence. This elevates it several notches above most other cannibal outings, and like Antonia Bird’s sadly under-seen 1999 opus “Ravenous”, it works on many levels.

There’s certainly plenty of horror here, both of the subtle, understated kind and of the Grand Guignol. Mickle allows things to build patiently throughout, and the film is in its early stages a highly effective piece of brooding, ramshackle Gothic, with some magnificently moody cinematography and a great eye for small but sinister details. A few well-judged jump scares aside, the first half of the film is very much focused on atmosphere, with most of its violence kept half-seen and in the shadows. This sits well with Mickle’s overall approach, slowly pulling the viewer in before unleashing some full-on gruesomeness towards the conclusion.

Things do get very bloody before the end, and the gore has a real gut-punch impact, thanks in no small part to some excellent work from the cast, Ambyr Childers and Julia Garner both convincing as the two girls, and Bill Sage on impressive form as their deteriorating but dangerous father. Kelly McGillis, becoming a Mickle regular after her appearance in “Stake Land” is also solid, though it’s the always likeable Michael Parks who steals most of the scenes as the coroner, taking on the film’s detective role and essentially driving the narrative.

Though “We Are What We Are” does have its flaws, most notably a few clumsy plot developments and lines of ripe dialogue, it’s another top draw piece of contemporary genre film making from the extremely talented Jim Mickle. One of the best cannibal films of recent years, it’s a rich and poetically realized effort, which will hopefully avoid being tagged as a mere remake and which should have lifted his name up onto the horror A-list where it belongs.

While Mickle has gone on to direct “In the Shadow of the Moon,” which was well-received, I think that “We Are What We Are” shows a wonderful progression of an indie horror writer/director who has been underrated.