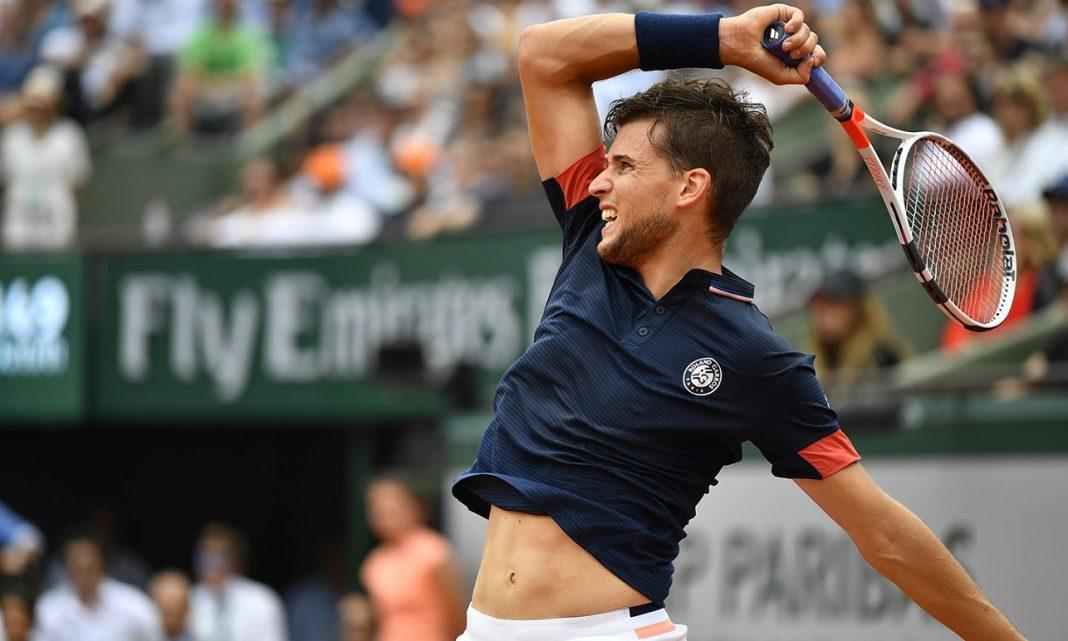 Dominic Thiem has had quite the year in tennis, but his biggest goal right now at the 2019 French Open is to take it one step farther than last year’s experience at Roland Garros. He wants to not just reach the final, he wants it all.

That means possibly having to face off against one of the holy trinity: Roger Federer, Novak Djokovic or Rafael Nadal. Is he ready?

“Dominic has a chance to win the French Open for sure, one day,” his coach, Nicolas Massu, said in an interview. “I hope that this year it happens.”

While he dropped a set for the third straight match, Thiem showed more flashes of his dominant clay-court game in a 6-3, 4-6, 6-2, 7-5 win over Pablo Cuevas on Saturday to advance to the fourth round.

“It was my best match so far,” Thiem said. “Not at all perfect yet, but the best so far.”

For a spot in the quarterfinals, Thiem will face Gael Monfils and likely a partisan crowd, too, against the French player.

The other fourth-round matchups set Saturday: top-seeded Novak Djokovic vs. Jan-Lennard Struff; No. 5 Alexander Zverev vs. No. 9 Fabio Fognini; No. 8 Juan Martin del Potro vs. No. 10 Karen Khachanov; and No. 6 Stefanos Tsitsipas vs. No. 24 Stan Wawrinka, the 2015 champion.

All top 10 men’s seeds are in the fourth round of a Grand Slam tournament for the first time since the 1970 Australian Open.

When Massu looks at Thiem’s game it feels a bit like staring in the mirror. Massu used a similar style in winning gold medals in both singles and doubles at the 2004 Athens Olympics. There’s the big kick serve out wide, the heavy topspin, running around the backhand.

“Many of the things that Dominic does today I was doing also, years before,” said Massu, who started working with Thiem this year. “Same ideas. So I understand what he wants.”

Massu made an immediate impact on Thiem’s game when he guided him to his first Masters series title in Indian Wells, California, in March — which was surprising because until then Thiem’s best results had come on clay.

Thiem reached the semifinals at the French in 2016 and 2017 before losing to Rafael Nadal in last year’s final. He also has four career wins at other tournaments over Nadal, the 11-time Roland Garros champion.

“It’s normal that they put the name of Dominic (as) one of the favorite players, because of the results that he had in the past,” Massu said.

Thiem, however, is becoming quite comfortable in Paris, where he also reached the final of the boys’ tournament in 2011.

“Eight years ago when I made the final of the juniors I fell in love with this tournament,” Thiem told the crowd after beating Cuevas.

Then Thiem, who is dating French player Kristina Mladenovic, entertained the crowd inside Court Suzanne Lenglen with a few words in French, apologizing for his beginners’ grasp of the language.

At 25, Thiem has plenty of time to learn.

“When you are 25 years old you are not even in the (halfway point) of your career,” Massu said. “The good thing about Dominic (is) he has the time.”

Already up to No. 4 in the rankings, Thiem sits behind only Djokovic and Nadal, who are both 32, and Roger Federer, who is 37.

“He knows that he has the chance one day to be No. 1 in the world,” Massu said. “You never know when — maybe soon, maybe later — but he works for that.”

A trophy in Paris would be a big step toward the top.

Serena Williams Out Of French Open 2019

Maybe it was the daunting deficit Serena Williams faced in the French Open’s third round. Maybe it was the way her 20-year-old American opponent, Sofia Kenin, was questioning line calls.

Either way, as Williams attempted to start a comeback Saturday with a three-ace game, she followed those big serves with some serious stare downs.

Whether it was meant to get herself going or intimidate Kenin, it didn’t work. Outplayed from start to finish, Williams lost 6-2, 7-5 to the 35th-ranked Kenin, ending her latest bid for a 24th Grand Slam title with her earliest loss at a major tournament in five years.

“In that first set in particular, she hit pretty much inches from the line, and I haven’t played anyone like that in a long time,” the 37-year-old Williams said. “I just saw a player that was playing unbelievable.”

It was the second significant surprise in a matter of hours: Earlier in the day, No. 1 seed Naomi Osaka was eliminated 6-4, 6-2 by 42nd-ranked Katerina Siniakova of the Czech Republic. That ended Osaka’s 16-match Grand Slam winning streak, which included titles at the U.S. Open final in September — when she beat Williams in the final — and at the Australian Open in January.

Osaka was trying to become the first woman to win three consecutive major trophies since Williams grabbed four in a row in 2014-15, a run that was preceded by a second-round loss at Roland Garros and a third-round loss at Wimbledon.

Since those early-for-her defeats, Williams had won six of the 14 majors she entered to surpass Steffi Graf’s professional-era record of 22 Grand Slam singles championships. With 23, Williams stands one away from Margaret Court’s mark for the most in tennis history; Court played in both the professional and amateur eras.

“Serena is such a tough player. I’m still trying to process what just happened,” Kenin said, about an hour after the match ended with her covering her face with both hands. “She’s a true champion and an inspiration.”

Kenin was born in Moscow and is fluent in Russian. Her family moved to New York when she was a baby, and she now is based in Florida.

“I’m proud to be an American,” said Kenin, who wore a blue U.S. Fed Cup cap to her news conference. “I think it’s great we moved to America for a better life for me.”

She is appearing in the ninth major of her career and now is headed to her initial trip to the round of 16, where she’ll meet No. 8 seed Ash Barty. Other women’s fourth-round matchups established Saturday: defending champion Simona Halep vs. 18-year-old Iga Swiatek of Poland; No. 14 Madison Keys of the U.S. vs. Sinikiakova; 17-year-old Amanda Anisimova of the U.S. vs. qualifier Aliona Bolsova of Spain.

Williams sat out four Slams in 2017-18 while she was off the tour to have a baby. Her first major back was last year’s French Open, where she withdrew before a fourth-round match because of a chest muscle injury. She went on to reach the finals of Wimbledon and the U.S. Open before wasting match points during a quarterfinal loss at the Australian Open this January.

Williams came to Paris having played only four matches since then — she withdrew from two tournaments because of an injured left knee and another because of illness.

And she had said she considered not entering the French Open at all.

“I’m glad I came, at the end of the day,” she said, “but it’s been a really grueling season for me.”

Asked whether a third-round appearance was satisfactory, given her issues, Williams not surprisingly said it was not.

“I wouldn’t expect to have gotten only to the third round,” she replied.

Said her coach, Patrick Mouratoglou: “All I know is, she was not ready. And it was obvious, I think.”

Kenin also was composed as can be, never getting rattled by Williams or by a Court Philippe Chatrier crowd that whistled and jeered her for repeatedly eyeing ball marks to see whether calls were correct.

After Williams showed fight by going from 3-1 down to 4-3 ahead in the second set, Kenin hung in there. At 5-all, she got the last break she’d need with a forehand return winner off a 102 mph (164 kph) serve.

She ran to her sideline seat and pressed a towel against her face.

There was one last pivotal moment: Serving for the victory, Kenin faced a break point, but Williams’ miscue let it go by. One last error by Williams — a backhand that sailed long — ended things.

Kenin dealt so well with the stakes, the scene, the setting.

She’d never shared a court with Williams before, although Kenin did try to set up a practice session during the offseason by texting Mouratoglou.

“Yeah, I tried to hit with her. It wasn’t possible, but I’ll take that,” Kenin said with a smile. “I’ll take the win over the hitting.”