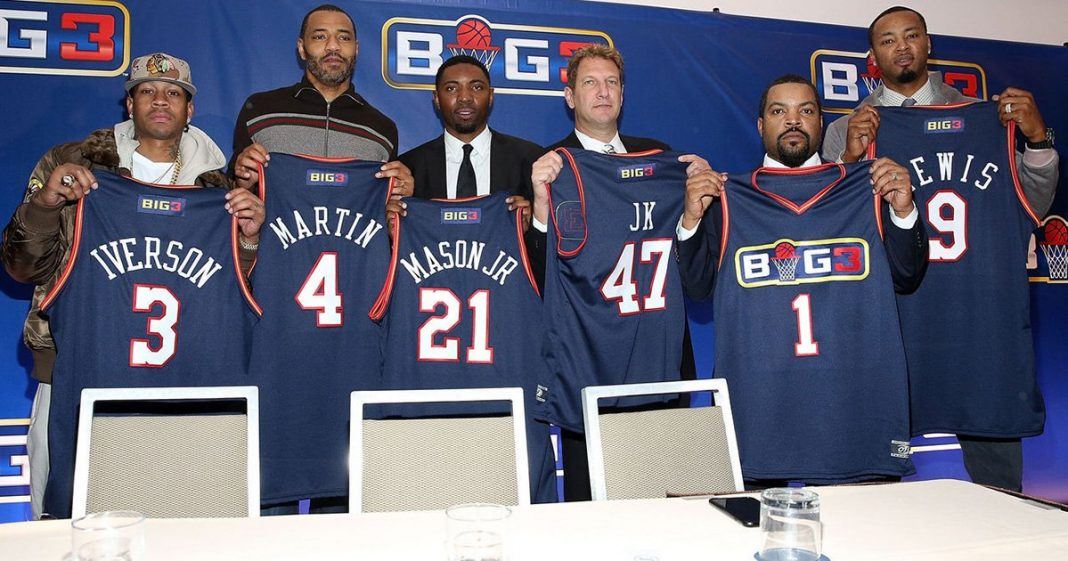 Ice Cube is looking more for blasts from the pasts rather than a retirement tour with his Big 3 3-on-3 basketball league. He has been very vocal that he’s not looking for All-Star Game intensity.

Players coming out of retirement for his new 3-on-3 basketball league were told they would need to deliver serious competition – and some were turned away when their bodies weren’t up for it. The product needed to be worthy of a sport that’s so popular around the world that it’s ticketed for the next Olympics.

So when the Big3 debuts Sunday in New York, it will not be a bunch of former players going through the motions. Cube expects them to be going all out, perhaps believing they can get another shot at the NBA or maybe even a gold medal.

“I think it’s going to be a treat for the fans and it’s not an All-Star Game,” the actor and entertainer said. “Guys want to win. They want to be champions. They want to be the first champions, so I’m not worried about that at all.”

The eight-team league of ex-NBA players, highlighted by Hall of Famer and former MVP Allen Iverson, begins with four games at Barclays Center in Brooklyn. It will play on nine more weekends throughout the U.S. and broadcast each Monday night on FOX Sports 1, culminating in the Aug. 26 championship game in Las Vegas.

Former top players such as Jermaine O’Neal, Rashard Lewis, and Mike Bibby are playing captains, while coaches include Julius Erving, Rick Barry, George Gervin, Gary Payton, Clyde Drexler, Charles Oakley, Rick Mahorn and Iverson – who is a coach and captain, meaning he can complain to himself about practice. Each roster of five players includes a captain and co-captain.

The league, founded by Cube and entertainment executive Jeff Kwatinetz, got the boost it needed when it landed Iverson. Most of the other players would be classified as NBA journeymen, but Kwatinetz said the game was more important than the name.

“Ultimately getting names is important. More important is that the competition is great, that people love the basketball,” he said.

Games will be played to 60 points, with halftime when the first team reaches 30. There will be some gimmicks that separate it from the official international basketball version, such as a 4-point shot and encouragement of trash talking.

“Our rules are funner than the FIBA rules. Big3 is going to be the most enjoyable 3-on-3 to watch at the end of the day,” Cube said.

“We’re allowing hand checking. We’re not doing that so the game can be rougher. We’re doing that to ensure great defense, so it’s not a dunkfest.”

FIBA has pushed 3-on-3 as a way to get more young players involved in the game, and its persistence paid off when the game was added to the 2020 Olympics in Tokyo. Success has been limited for men’s teams from the U.S., where top players favor standard 5-on-5 competition, but Cube thinks his players could be the answer.

“I think you’ll have a league where guys are thinking 24-7, 3-on-3 basketball and I believe they’re going to end up being some of the best 3-on-3 basketball players in the world,” Cube said. “So it’s conceivable that one day they could compete for the United States for the gold medal and all that.”

Lewis was a two-time All-Star who averaged nearly 15 points in the NBA and played in the Finals for the Miami Heat in 2014 in his final season, giving him one of the best resumes among the players in the Big3. He had wanted to play a little longer in the NBA before hurting his knee, so figured playing halfcourt would be a perfect way to continue without the wear and tear.

Then he saw how serious guys were when they played preseason scrimmage games and realized he needed to get himself in better shape.

“I think that’s the thing is us as athletes, especially playing professional basketball, the competitive nature is always there, and I saw that in the promo game, the preseason game,” he said. “Maybe the first two, three minutes going into it, guys kind of eased into it to get a feel for it and try to understand how the 3-on-3 is going to work. But once guys started knocking down shots or defending you, that competitive nature kicked out because it’s a defensive challenge. You have to really play defense because pretty much it’s a wide-open court when you’re playing 3-on-3.”

Players will compete for a revenue share based on final league standings. And if they aren’t a captain or co-captain and their teams don’t make the championship game, Cube said players will go back into the draft pool for next season – meaning they may not even be assured a job.

“We’ve done everything to incentivize hard play and guys to go for it,” Cube said, “and we’ve seen a few scrimmages, and these are some of the most intense 3-on-3 basketball games I’ve ever seen in my life.”

Whether that continues when the real games start will be determined beginning Sunday.

“This is not a novelty, let’s just go out and fill some space,” Kwatinetz said. “This is, if you think about it, 3-on-3 is the most-played sport in the world and the fact that there wasn’t a professional 3-on-3 league in the United States is shocking but left a real opportunity if we were really committed to doing it right and the players stepped up, which they have.”