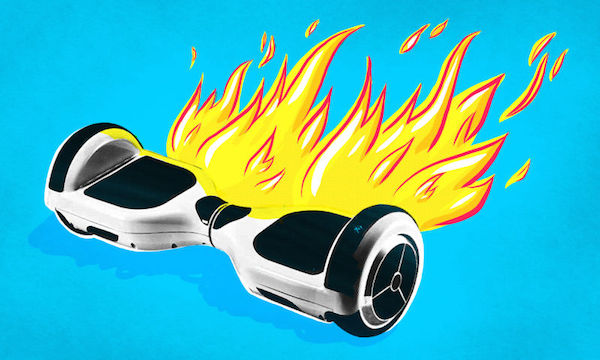 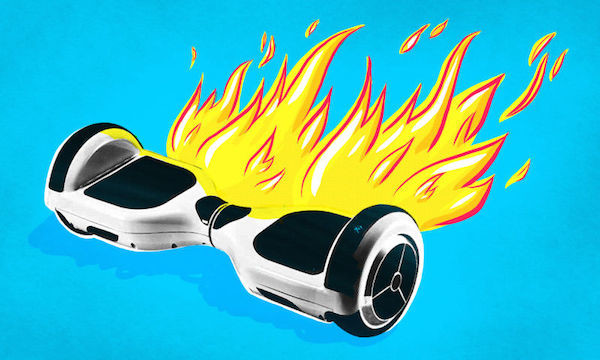 It’s the end of 2015 and the movie Back to the Future’s prediction of the hoverboard has come true, well, almost. The two-wheeled, self-balancing hoverboards that are becoming more and more popular these days are a far cry from the actual floating skateboard Marty McFly used in the movies. They’re more likely to send both Marty and Biff into a pile of manure and even potentially ignite the methane given off by the pile.

But, next to drones, hoverboards are quickly becoming a popular choice as gifts these coming holidays. Followed maybe by tablets and new Star Wars action figures including the lovable BB-8. Hoverboards are the rollerblades of the 2010s. They can take kids and adults around short distances without running and walking. Unfortunately, these mini-Segways could usher in another period of lack of exercise and obesity which Americans have just gotten out thanks to the popularity of exercise apps and wearable tech. There’s a conspiracy afoot. Despite earning scowls that these devices promote laziness, these devices are quite fun making them hot items for Christmas. Hot items, literally. These things can crash and burn. Sometimes, they don’t need to crash. They can just sit around and burn, mostly the cheaply made ones. Hoverboards have become fire hazards which prompted major stores such as Amazon, Target and Walmart to pull them off the shelves.

Interested in getting one? First step is to Google, of course, to try and find some other store besides Amazon. However, the first suggested word that follows the word hoverboard is fire. Due to lousy quality control and questionable battery choices, cheap hoverboards are very likely to catch fire. Enter the same terms on YouTube and you’ll see why. Still interested in getting one for relatives this holiday season? Stay away from the very cheap ones. Even good ones can be hazardous if charging instructions aren’t strictly followed. Aside from catching fire, cheap ones are said to be prone to sudden unintended accelerations which could cause various accidents much like the trending topic in the Philippines concerning one of Mitsubishi’s SUVs.

Where’s the fun without the risk eh? Having two wheels on our feet is not far off from having eight when all we had were rollerblades and roller skates, at least, some exercise is involved. Anyway, those that cannot be dissuaded should choose quality over price. And just to be sure, here are some tips to keep your hoverboards from burning your house down and taking you back to the stone-age instead of the future.

You may have to purchase your hoverboards the old-fashioned way as major online stores pulled them out of their catalogues and many couriers won’t accept them. They’re not really banned, yet, but closely guarded.