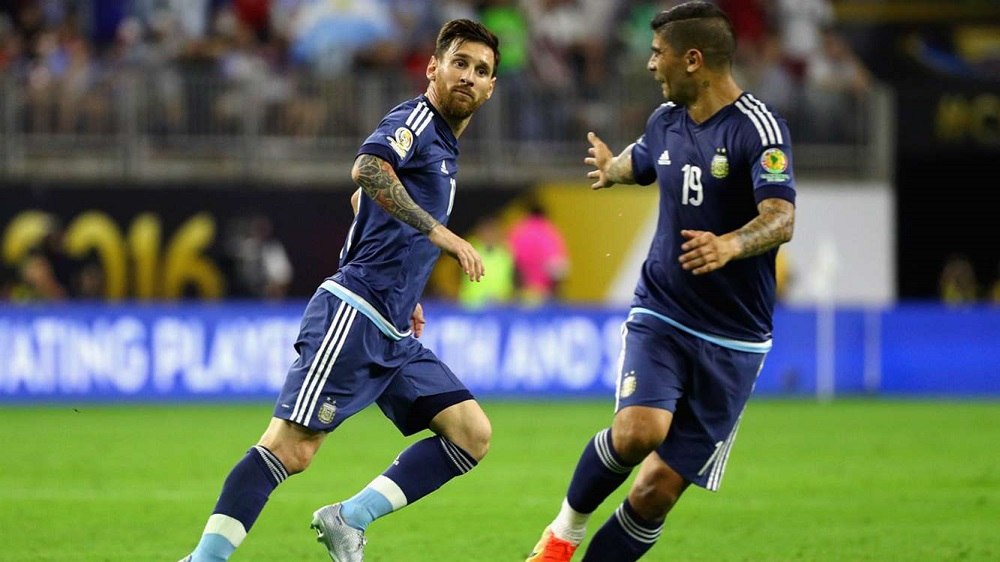 Messi provided the assist for Ezequiel Lavezzi’s opener, then scored his stunner before Napoli’s Gonzalo Higuain fired in to make it 3-0.

Higuain scored with a tap-in in the 85th minute to complete the rout.

“I am happy to have surpassed Batistuta’s record, and I want to thank my team-mates, it’s theirs as well,” said Messi, who turns 29 on Friday.

Hebei China Fortune winger Lavezzi will miss Sunday’s final, against Colombia or reigning champions Chile because he fractured his left elbow after tumbling over the advertising boards.

The incident happened in the second half when the former Paris St-Germain player fell over backwards, trying to control a pass with his chest. 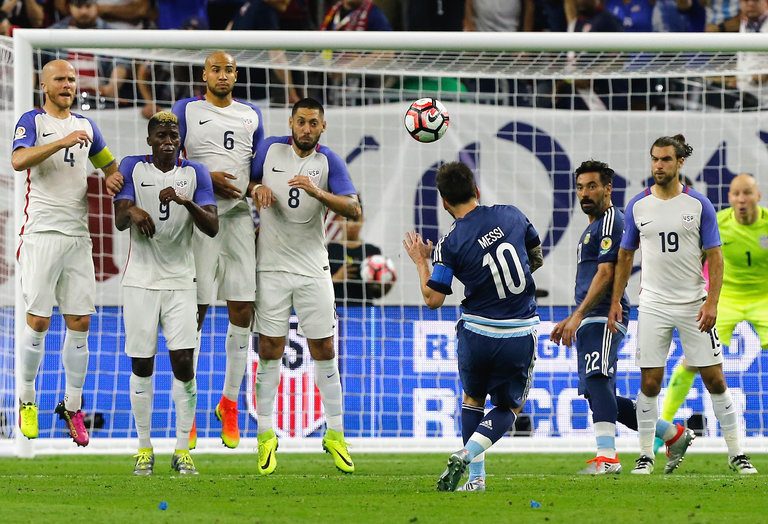 Lionel Messi stood calmly over the ball about 25 yards from the goal, contemplating the possibilities in front of him, which for him often seem almost infinite. He had already made one spectacular pass that had led to a goal for Argentina, and now he had a chance for another moment of brilliance.

Messi took two steps and then struck the ball with his left instep, curling it over the wall of defenders and back down into the absolute upper-right corner of the goal, where it stung the net with such force that the goal posts rattled.

The American goalkeeper Brad Guzan had no chance, and neither did his team.

Behind Messi’s almost predictable mastery, Argentina thrashed the United States men’s soccer team by 4-0 in a Copa América Centenario semifinal at NRG Stadium on Tuesday night in a game that reaffirmed Messi’s widely accepted place as the world’s best player.

Messi set up the first goal with a clever pass to Ezequiel Lavezzi in the third minute, scored the second goal on the exquisitely placed free kick later in the half and finally scooped up a loose ball in front of the goal in the 86th minute and fed it to Gonzalo Higuaín for Higuaín’s second score of the game and Argentina’s fourth.

It was a demonstration of total superiority that left United States Coach Jurgen Klinsmann saying that the best team — by far — had won.

“After that early goal, I think our players could feel that, probably at every position on the field, they were just better than we are,” Klinsmann said.

That was particularly the case up front. Messi’s goal was his 55th for his country, pushing him past Gabriel Batistuta as Argentina’s leading scorer, and he will have a chance to score more in this tournament. On Sunday, Argentina will play the winner of Wednesday’s semifinal in Chicago between Colombia and Chile with the hope of winning its first major trophy in more than 20 years, since the 1993 Copa América.

For all his talent and all his championship success at the club level with Barcelona, Messi has never won a major international tournament with Argentina. But he has come agonizingly close. The Argentines lost in the final at the 2014 World Cup and again at the 2015 Copa América, so Sunday’s final will be Messi’s third chance in three years.

The Americans had been hoping for one of the biggest upsets in their history, but they knew it would require suppressing Messi. Instead, the extraordinary gifts bestowed on his two small feet were too much for the Americans to overcome, delighting the Argentina fans, who were a minority in the stadium.

Messi dribbled around the perimeter of the United States defense, probed for cracks and darted past stumbling defenders. He lifted incisive passes onto the welcoming feet of his teammates and scored what was perhaps the goal of the tournament.

“He has an unbelievable left foot,” said the United States’ captain, Michael Bradley, who was part of the four-man wall that Messi defied. “Everybody in the world knows that. He was able to hook a great one in the upper corner.”

But it was not just Messi. Argentina, the winner of 14 Copa Américas and two World Cups, is loaded with talent and spent much of the night playing keep-away from the hustling Americans. Argentina completed 625 passes compared with 191 by the Americans, who did not have a single shot on goal.

“We got dominated,” said Sunil Gulati, the president of the United States Soccer Federation. “Getting here was an accomplishment. But it doesn’t feel quite the way it did a few hours ago.”

For the Americans, the task of facing Argentina was made more difficult because three starters from their last game — Jermaine Jones, Alejandro Bedoya and Bobby Wood — were suspended because of cards they had received in the quarterfinal win.

And Clint Dempsey — the local star for the United States, having grown up in Nacogdoches, Tex. — could not crack the Argentine defense and was replaced in the 78th minute, unable to do for his country what Messi did for his.

On Saturday, in a quarterfinal against Venezuela in Foxborough, Mass., Messi had waited until the eighth minute to make a remarkable pass that produced the game’s first goal. On Tuesday, he required less than half that time.

In the third minute, Argentina played a short pass off a corner kick, and Lavezzi pushed the ball back to Messi, who was standing alone just outside the 18-yard box.

As soon as he tapped the ball in Messi’s direction, Lavezzi broke in the opposite direction toward the goal, and Messi, with one expert touch, chipped a floating ball back into the box.

Lavezzi was all alone there, and he headed the ball over Guzan for the goal.

Klinsmann lamented that his players appeared to show too much respect for Argentina’s talent. On Messi’s brilliant free kick in particular, Klinsmann said, the Argentines moved the ball ahead by about five yards without a complaint from the American players. That five-yard differential, Klinsmann said, allowed Messi to shoot instead of pass.

“In general, we had too much respect,” Klinsmann said.

Bradley respectfully disagreed with that assertion.

“I respect his opinion,” Bradley said. “Please don’t make it out to be anything like that.”

Before the first ball of the Copa América was kicked this month, Klinsmann set a clear target for the team: reach the semifinals. It was an ambitious but realistic pursuit, even for a country whose history in the Copa had been sporadic at best.

The United States achieved Klinsmann’s objective by beating Ecuador last week, but awaiting the Americans in the semifinals was an opponent with a much more impressive pedigree and a much more talented roster.