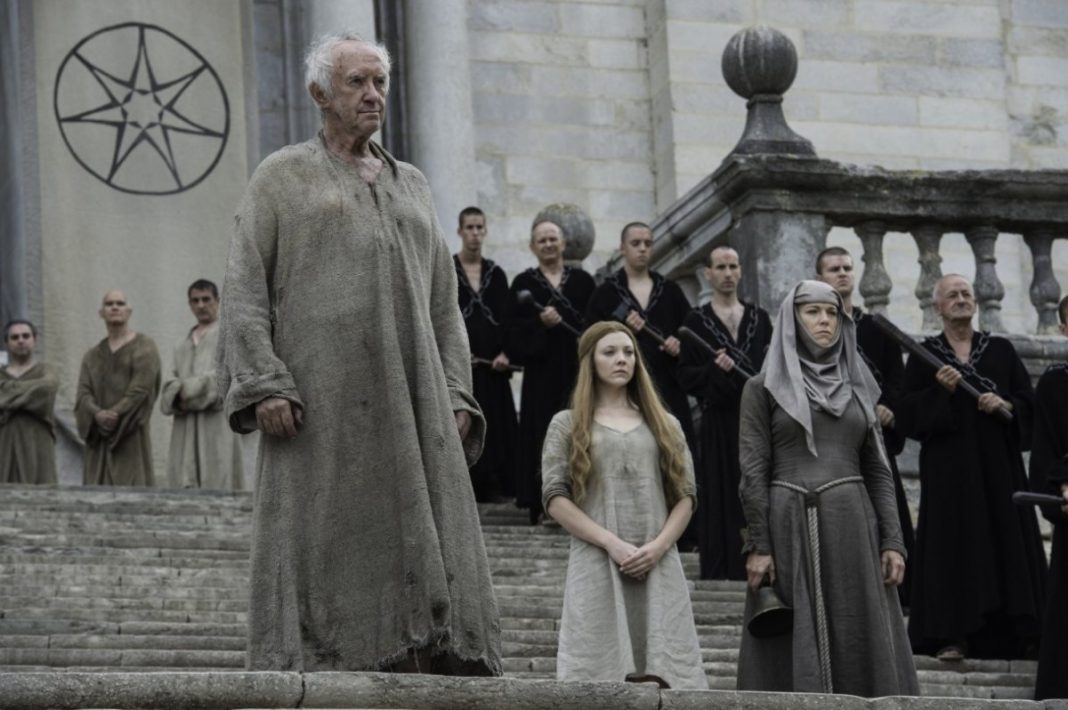 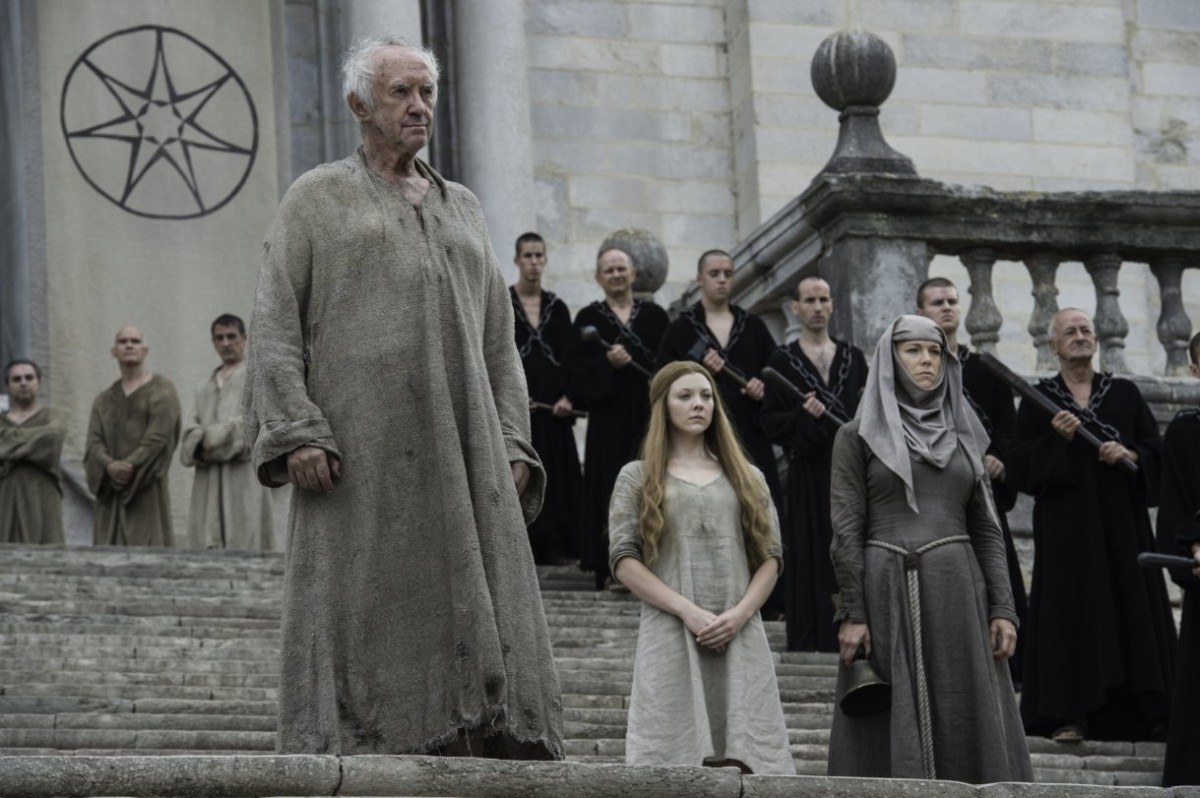 What the hell just happened on Game of Thrones?

I can’t figure out what the biggest moment was on “Blood of My Blood.”

Has to be Margarey handing Tommen over to the Sparrows, right?

I guess she figured that was her only play. She’d been stuck in that nasty prison for no telling how long, and no cavalry appeared to be on the horizon.

No way she believed that BS she gave Tommen about the High Sparrow. The kid was on the edge of falling in with the zealots, and she provided the last nudge to save herself.

While I gather my thoughts on how Tommen should be dealt with, we can dive into Sam’s return home to his racist dad’s place. The old man who sent Sam away was about as bitter a guy as we’ve seen on GOT. He was more concerned with a Wildling sitting at his table (looking regal thank you), than he was with the existence of White Walkers.

The dinner was about as awkward as the one in Wedding Crashers, minus Sam getting jerked off under the table. 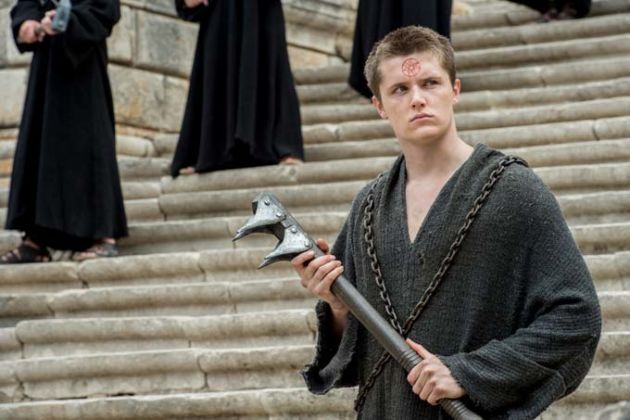 Eventually, Sam decided to take Gilly and the kid with him to the Citadel.

Sam did steal his old man’s sword on the way out the door. A dumb move that will surely come back to bite him. For a second I thought he might impale himself on it as he took it off the rack.

Switching over to Bran….he should be dead at this point. He and his friend somehow eluded the zombies that overran Hodor last week, long enough to get rescued by a very old face.

Bran’s uncle Benjen was not dead, after all. He tells them he was attacked by Walkers (back in season one) but was saved by the Children of the Forest. Good thing for Bran too. Now the kid can serve as the new Three Eyed Raven at the Wall, where he is told he will battle the Night King.

For all we know he’s been hold up in a brothel all this time.

We all knew Arya wasn’t gonna kill that nice Lady Crane. Arya is Arya. She is somebody. And she could not let herself go. What would be the point of becoming an assassin anyway if she couldn’t kill off the people Arya Stark hated?

I don’t know how Arya will escape her impending assassination at the hands of the girl who was training her. Jaqen signed off on the hit himself.

Let me break down the Margaery situation. The Tyrell troops made it to King’s Landing to escort her safely home, just before her walk of atonement was to occur. Her father gave the worst pre-fight speech in the history of warfare, but it looked like Jaime and company would indeed save the Queen.

The High Sparrow talked a bit of trash about Jaime and the troops not having the authority needed to take Margaery. Yet, authority lies in the shields and swords of the mighty.

Even a Sparrow who’s high knows that. So the leader of the zealots backed down.

It was just a rope-a-dope, however.

There was no need for a walk of shame. The High Sparrow had what he wanted. Tommen had converted over to the dark side. And that’s saying something considering the womb from which he popped. 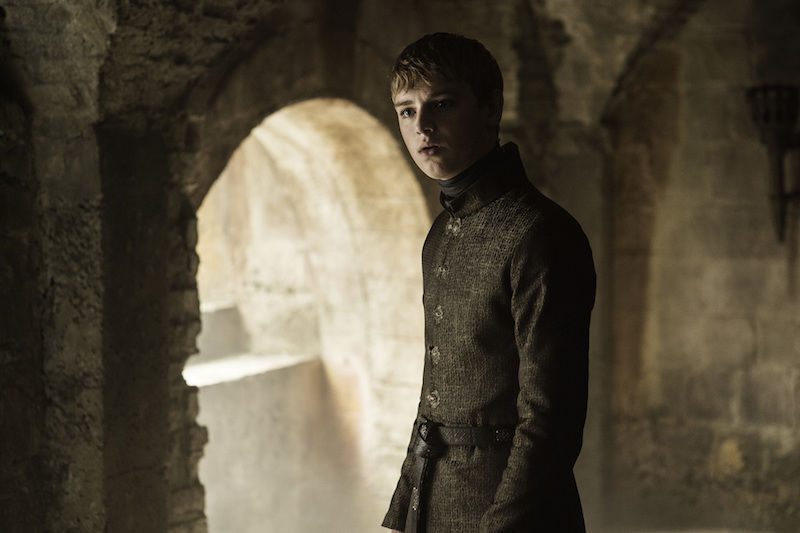 The Crown and the Faith were joined by the High Sparrow to thunderous applause from the common folk. This old guy played the same game as every father in the land, by offering a woman to join two houses.

I must admit it was a helluva move by the dirty old geezer.

Not only is Tommen a part of the Sparrow crowd, Jaime gets stripped of his power. This was a major shift. Although, it seems like Tommen would be easy to convert back to his family’s side since he’s so weak minded.

Cersei believes all this turmoil is just making her family tougher. Uh, no.

Jaime is being sent away to River Run, and she still has a court date. Her family is on the verge of being wiped out completely. Let us not forget she started all this in motion to get rid of Margaery in the first place.

There was some good news before the credits rolled. Dany got on screen long enough to fire up her Dothraki troops. Her scene was short but sweet as she asked Daario about the number of ships she would need. Then she just rides off by herself.

The ending paid off when we got a look at a full-grown Drogon flying overhead. And Dany had mounted the deadly creature….the special effects looking much better than we saw at the fighting pits.

I must say, that tongue was something special.

Dany’s, not Drogon’s. His was cool or whatever. But there is nothing like Daenerys Targaryen speaking one of her many tongues.

Not hard to see how she gets all those horsemen to follow her lead. Check you next week. I’m clicking over to Craigslist to find myself a horse and a sickle.