“Lily Sunder Has Some Regrets” is an odd title for a Supernatural episode. It sounds like something I might pick for a big bang fic that I can’t figure out how to title, because it’s unusual and might make people go, huh, I wonder what that one’s about? I sometimes really miss the days of classic rock episode titles. But other than the unusual title, this was a solid episode. I will always prefer the Winchesters onscreen 100% of the time (Jared and Jensen do not appreciate my preference, but this hasn’t deterred me), and I haven’t always been a fan of the angels/heaven storyline in the past, but this episode was less about angels in general and more about the one angel I care about – Cas.

Much as we’ve been witness to the evolution of Sam and Dean’s views on when killing is justified and when it’s not, increasingly falling into the gray areas instead of black and white, we were able to see some growth in Castiel’s views in this episode. I was chilled by his coldness in the flashback scenes to the execution of Lily’s husband and child (though even then Cas was the only angel who flinched when the human in the house cried out). But other than that flinch, Castiel was at that time truly the ‘good little soldier’ that Dean has often been disparagingly called. The events of the present were a sharp contrast to that way of being, a reminder of how far Cas has come – and that, in contrast to what Ishim believed – that change is in large part due to his relationship with the Winchesters.

Points to Show for putting Cas in a female vessel again in the past (and Benjamin in the present)  – I like the reminder that vessels are just that, and that gender is irrelevant. It’s part of what makes angels the fascinating creatures they are (even when they’re dicks). Castiel’s explanation of Benjamin’s close relationship with his vessel, who he considered a friend, was also interesting. I sometimes forget that not everyone’s vessel is long gone like Jimmy Novak. 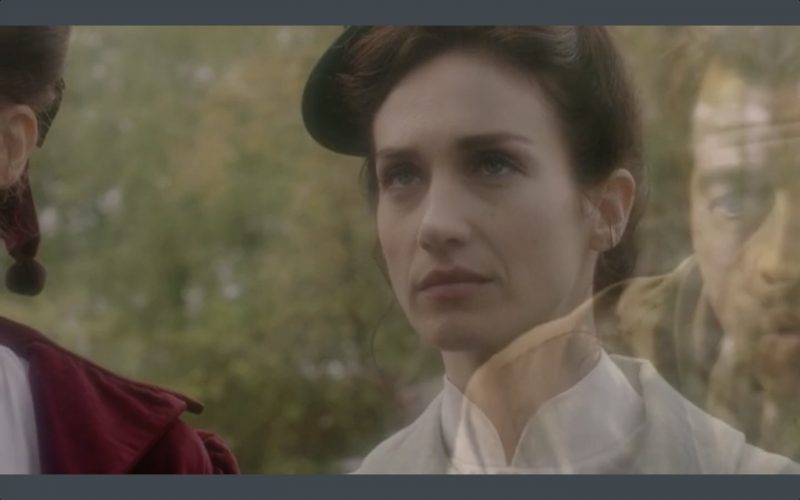 Bonus points for the awesome shot of Benjamin’s wings. And Winchesters in fed suits. 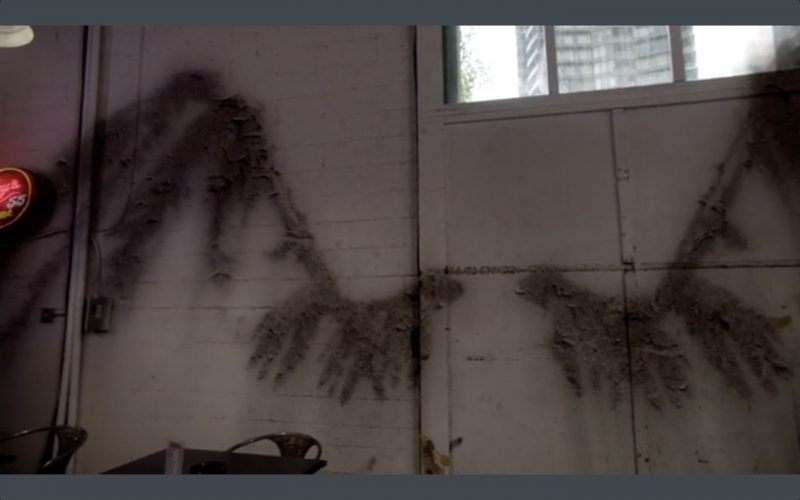 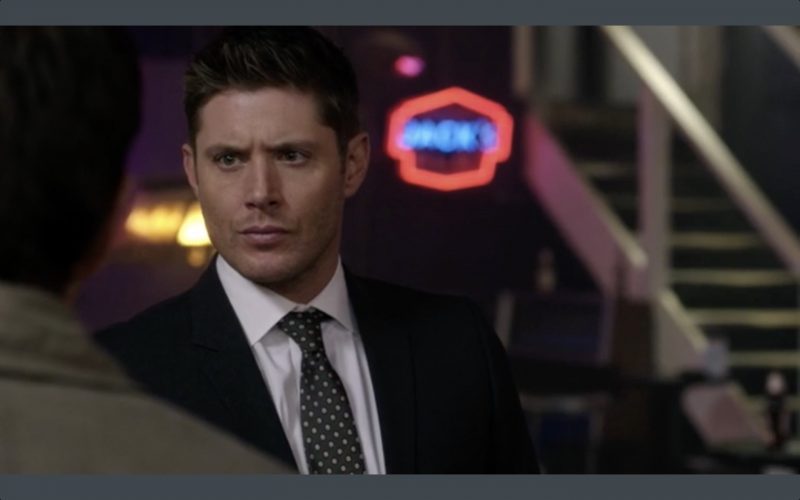 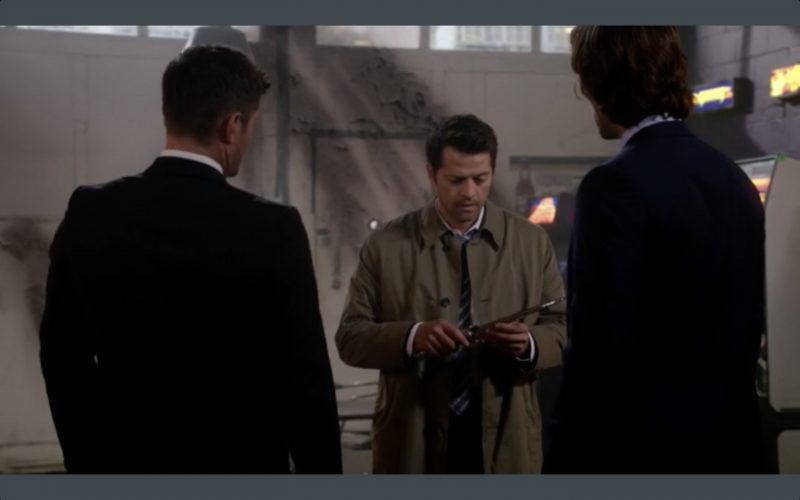 This episode was an opportunity for Misha Collins to show his stuff, and he pulled off both the heroics and the emotional moments beautifully. Two episodes in a row we have Castiel saving the day by taking out someone/thing with a well placed angel blade! But the emotional scenes were even more deftly handled – I felt both empathy and affection for Cas as a result.

In the beginning scenes (after the badass fight scene between Benjamin and Lily), Dean is pissed off because Cas did something that may well have ‘cosmic consequences’ – although we know damn right well that if Dean was in the position of being able to save Cas or Sam, he would have done the same thing. Cas, however, isn’t having it. He refuses to apologize for saving the Winchesters’ lives and clearly doesn’t regret it. Cosmic consequences or not, I respect him for that. I always tell my students that children learn more from what their parents’ model, not what they say – and Sam and Dean have certainly modeled the ‘save your brother deal with the consequences later’ mantra for Cas. Apparently, he was paying attention. And since that’s the way I like my Winchesters, gotta say that’s the way I like Cas too. Sorry, Dean. 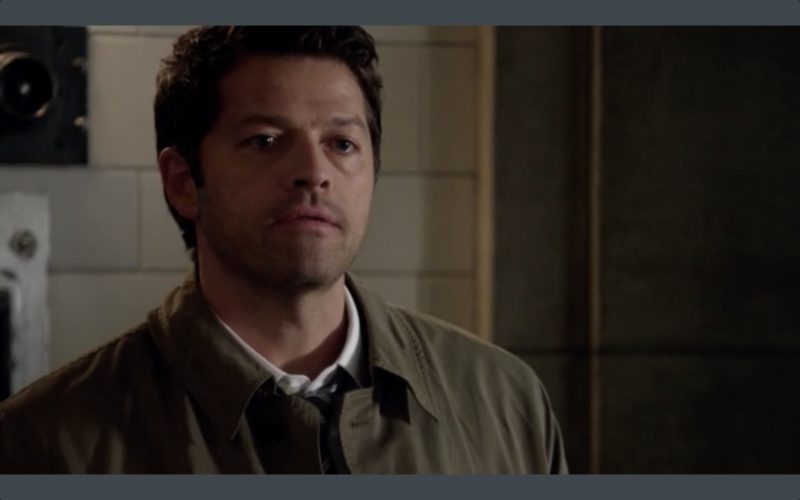 The understated humor of those early scenes also worked really well – and without the cheesy music that announces ‘hey something funny is happening’ that I hate so much. Sam’s bitch face when Dean snarks at Cas to make sure he doesn’t do anything really stupid again was priceless, as were Sam’s repeated attempts to get either Dean or Cas to talk in the awkward car ride. Poor Sam, surrounded by two stubborn bickering not-really-but-sort-of-two-year-olds. And all three of them jammed onto that diner bench seat? Classic Supernatural. 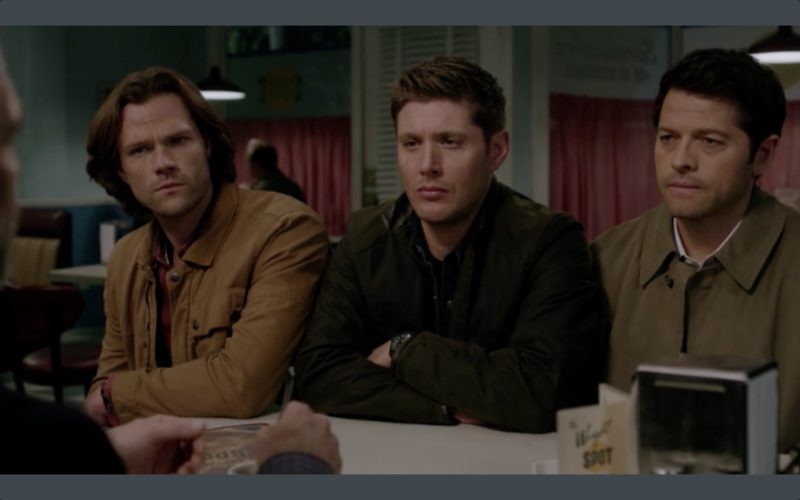 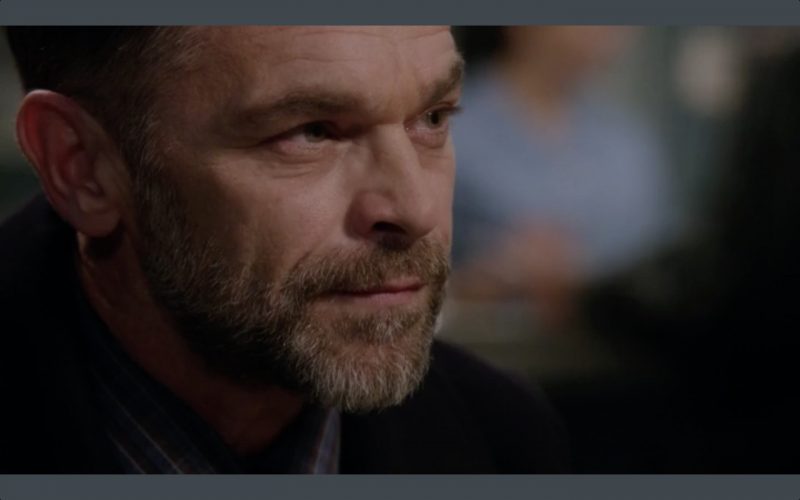 One of my favorite little moments was Sam and Dean waiting on the sidewalk while Cas is inside the diner talking to Iphrim. Dean is pacing, pissy, barely staying there, and Sam is watching him.

And in Dean goes. I laughed out loud.

Also extra points for some of the cheeky references –

The Wright Spot – in honor of the episode’s talented director, Tom Wright?

I liked the character of Ishim too – well, I didn’t like him, he was a dick. But I liked the way he was written. Ishim brought back a reminder of the way many angels feel about humans, and the contrast between that and the way Cas now feels about them (again thanks to Sam and Dean). Another subtle way to highlight the evolution of Castiel’s views, and his increasingly close ties to humanity.

Misha got some great lines – snarky ones like “If I’m going to do anything else stupid, I’ll let you know,” and serious ones that I thought he nailed.

If that’s not something he learned from the Winchesters, I don’t know what is!

Castiel’s heroics weren’t limited to his last minute save with the angel blade. He’s able to step up and do what he believes is the right thing repeatedly, explaining (with precious little patience, because really, they do get this) that he’s willing to take whatever Ishim dishes out if it means he can save his angel friends.

Sam and Dean (insisting that they’re going after Lily): We have to try. And we’re not asking.

Is it hot in here? 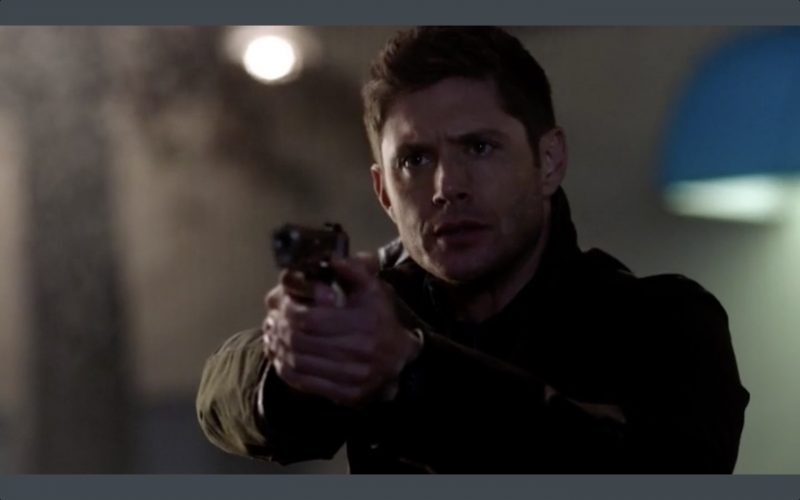 The fact that the Winchesters approach Lily to talk, instead of shooting first asking questions later, also shows their continued evolution. I feel like there was a time that Dean especially might not have been so down with just talking to someone who just tried to kill his friend, but this is a human, even if they believe she’s a demonically-jacked-up one at the time. She’s said she’s not a threat to them, though, and so they give her the benefit of the doubt. And that makes all the difference. 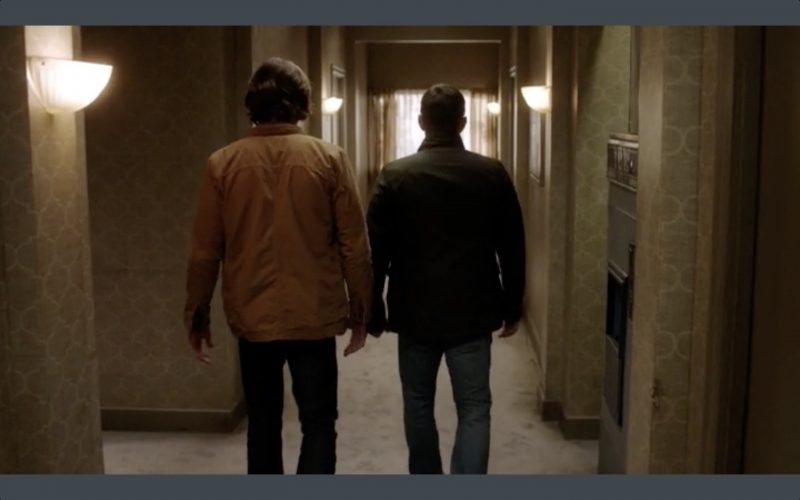 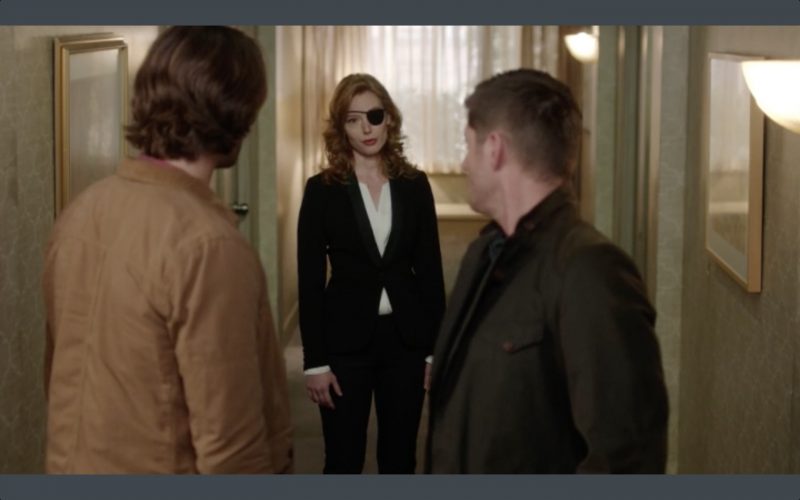 Points to Lily (and to writer Steve Yockey) for her reminding the boys that she can hear them. Because, as they often do, they’re standing like five feet away from her! I laughed out loud then too.

I also love that Sam didn’t listen to Dean and let Dean confront Ishim alone – thus we get one of my favorite things,  Sam bursting in to save the day. With Lily, but whatever. (We knew that was going to happen as soon as Lily announced that Ishim was about to kill Sam’s brother…) They all get to be pretty badass right up through Cas using that angel blade. 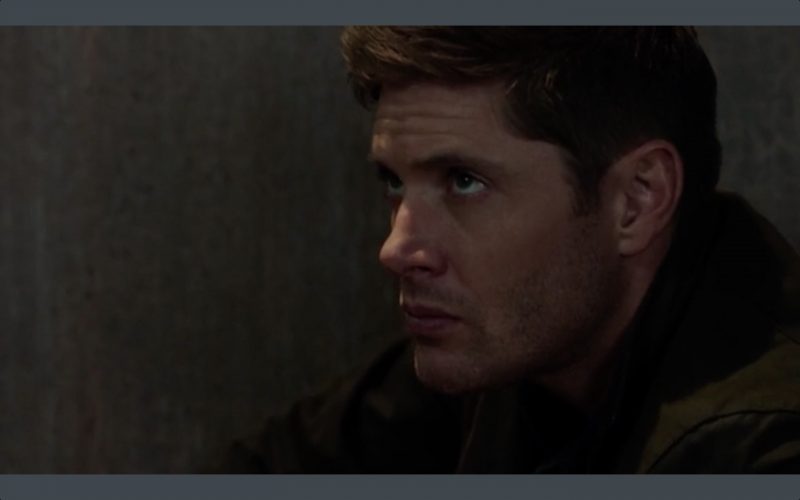 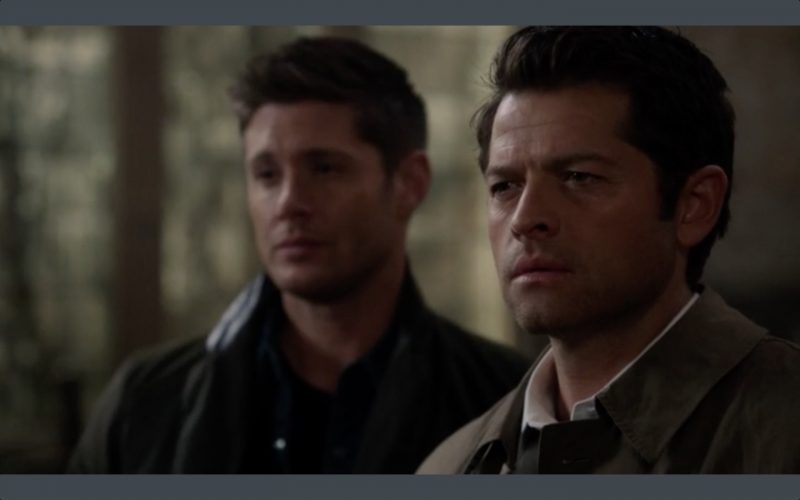 I was rooting for Lily to live, especially after she stood up to the abusive Ishim and told him she would not be powerless anymore. That was a beautifully acted emotional moment when Cas apologized to her and said that if she can’t forgive him, she’ll be able to find him. Once again, that took courage on Castiel’s part – similar to when Sully apologized to the girl seeking revenge for her sister’s death. Apologies are powerful when they’re genuine, and I liked that theme repeated here. 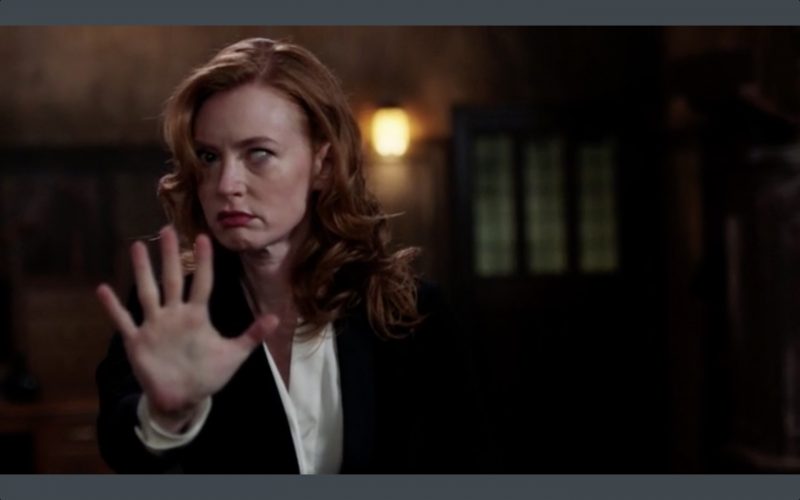 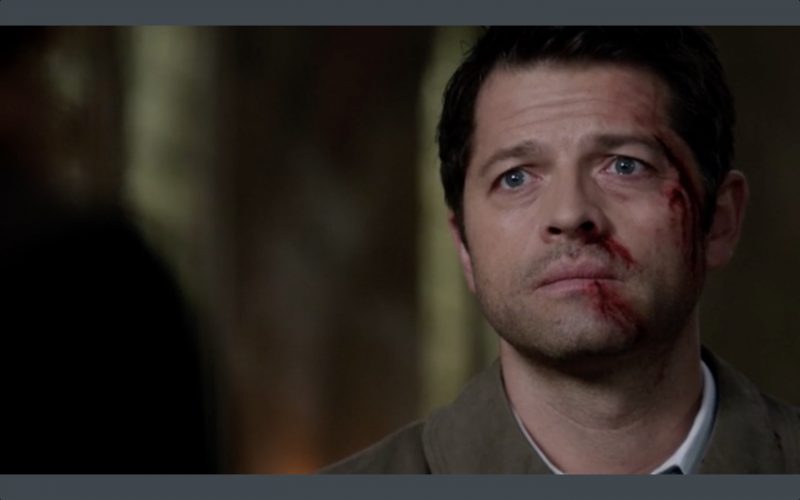 I’ve been complaining that I’m confused about what’s going on with Cas and the other angels this season, so it was nice to get a little clarity in this episode. No wings, no teleporting, have to take a car. Can still do some healing but it takes a lot of out of them.

Sam, Dean and Cas are on the same team at the end of the episode, Dean with a peace offering beer and some blunt conversation instead of cold shoulders or snarking and Sam with the good sense he’s exhibited all episode. I love Sam’s openness with both his brother and Cas recently – the three of them just TALKING felt therapeutic. And wonder of wonders, they even talked about some of the themes I had already drawn from the episode – Kelly and the Nephilim are also a mom and her kid. What implications does that have for how Cas will feel about stopping the baby from being born?

Cas: There was a time I wouldn’t have hesitated… 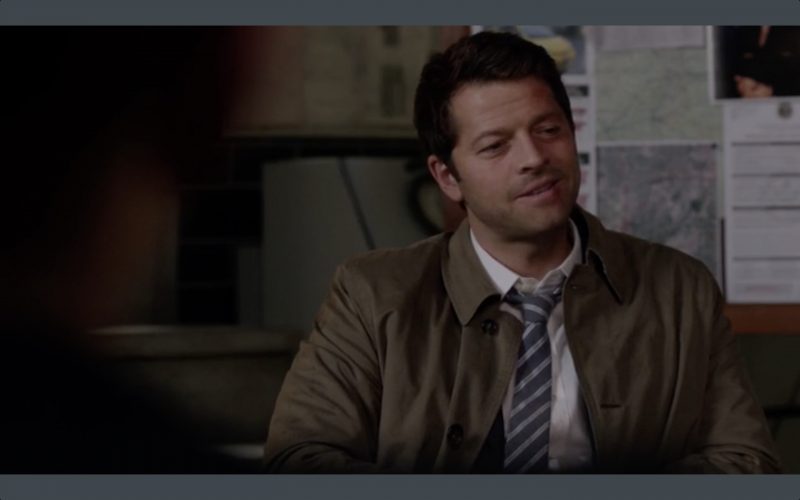 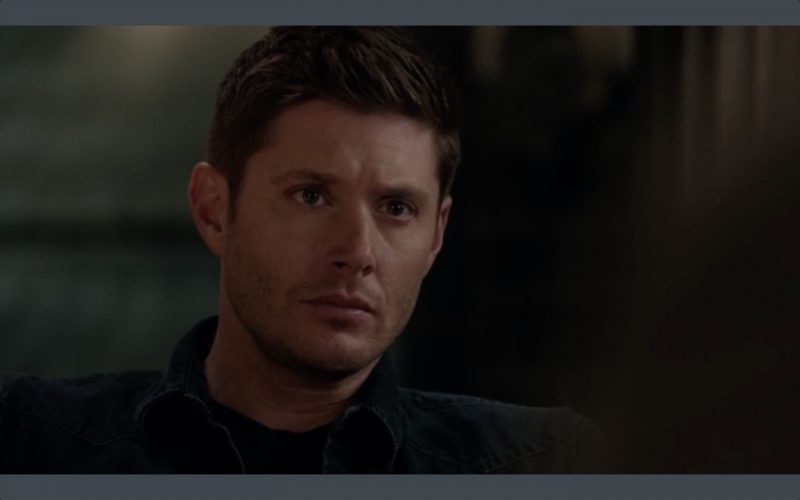 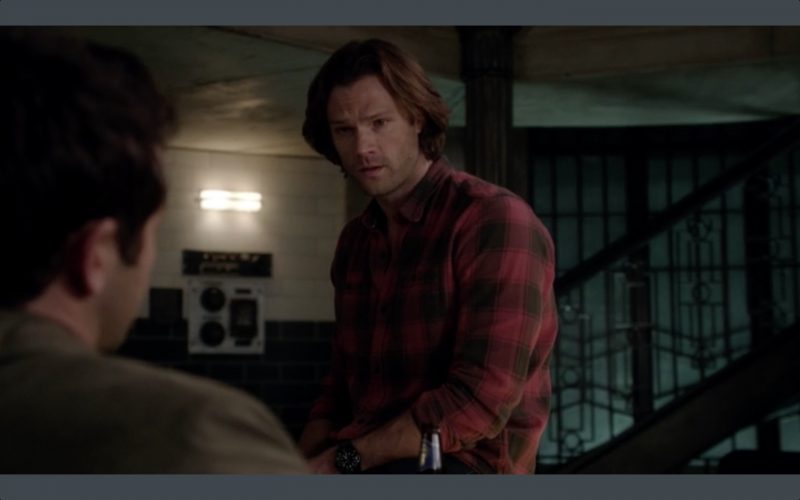 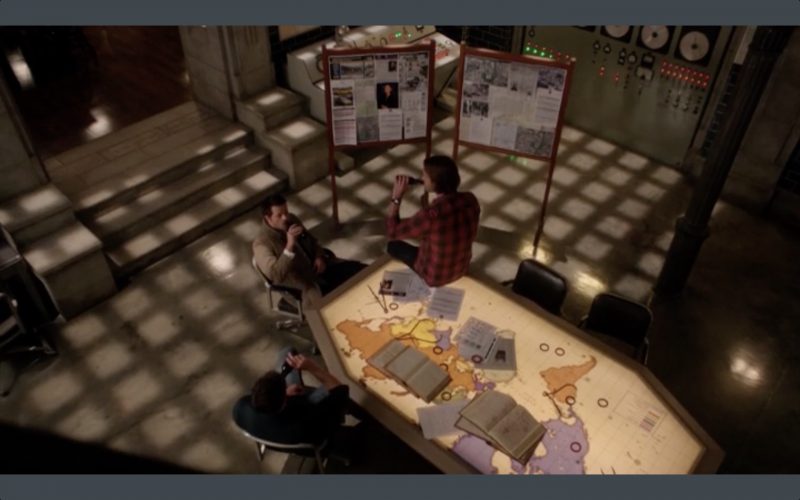 That’s so true. I feel like it’s true for Dean too, but that time – for both of them – has passed. There are things I don’t want to see change about Supernatural and its characters. I like the Winchesters larger than life big damn heroes who will go to the ends of the earth for each other. But the sort of evolution we saw in this episode, especially in Cas, felt organic and earned instead of shoehorned or convenient.

Writer Yockey was able to tell a fascinating story about Castiel while also remembering to keep Sam and Dean in character – in small moments of shared humor like “you could have just said yes”, Sam running to Dean after he bursts in to save him, the brothers hanging onto each other as they’re blinded by the white light, and Sam remembering his time being soulless as he empathizes with what using angel magic is doing to Lily’s soul. 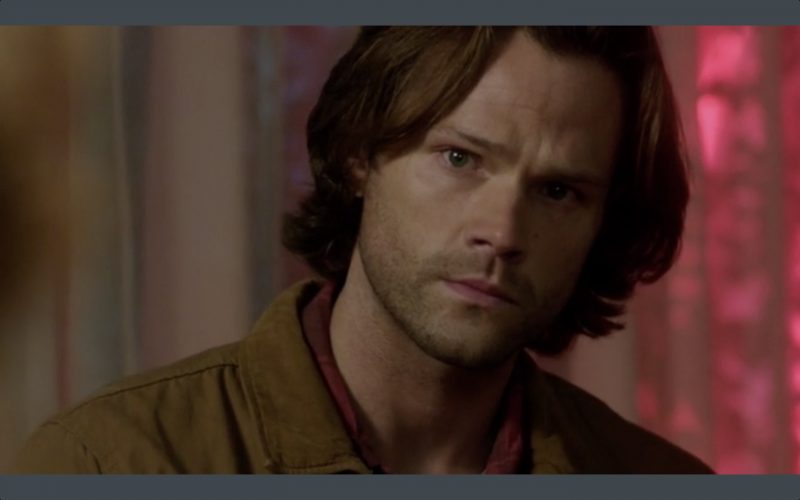 Oh, and Dean’s unrepentant love of pie, no matter what the source. 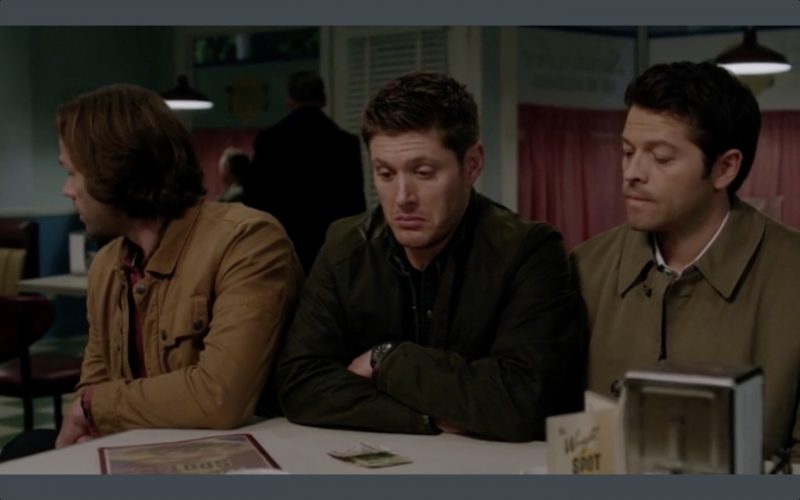 Kudos to guest stars Alicia Witt and Ian Tracey for creating some memorable characters and being able to keep up with the Best.Cast.Ever.  And props to the brilliant Jerry Wanek for sets like this: 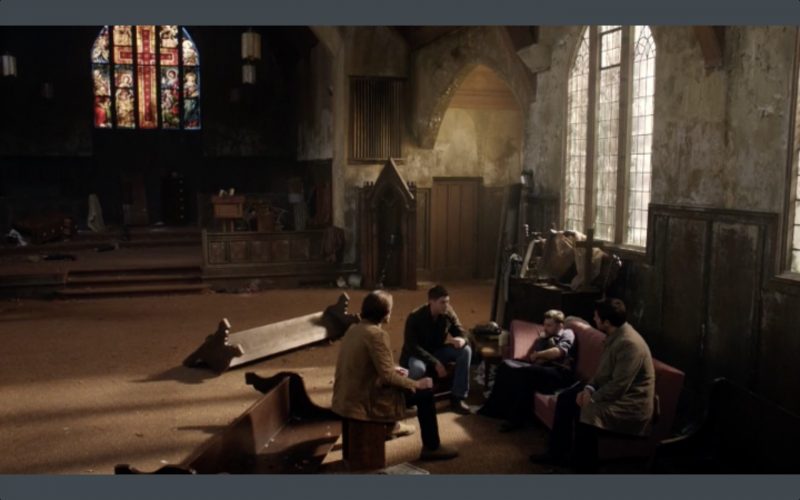 Here’s the trailer for Supernatural 1211 Regarding Dean now.