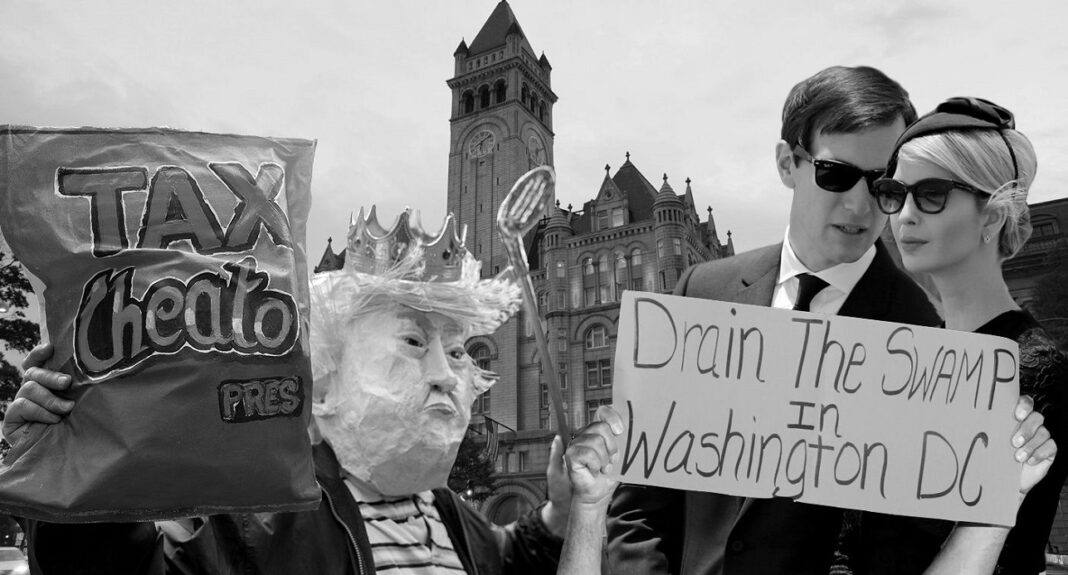 Remember when Donald Trump claimed that anyone who left his administration couldn’t work for a lobbying firm for at least a year? Neither does he as nothing has been done about the forty people doing just that. As his approval numbers have dropped to 38%, those around him continue raking in money during the Coronavirus pandemic.

Forty lobbyists with ties to President Donald Trump helped clients secure more than $10 billion in federal coronavirus aid, among them five former administration officials whose work potentially violates Trump’s own ethics policy, according to a report.

The lobbyists identified Monday by the watchdog group Public Citizen either worked in the Trump executive branch, served on his campaign, were part of the committee that raised money for inaugural festivities or were part of his presidential transition. Many are donors to Trump’s campaigns, and some are prolific fundraisers for his reelection.

They include Brian Ballard, who served on the transition, is the finance chair for the Republican National Committee and has bundled more than $1 million for Trump’s fundraising committees. He was hired in March by Laundrylux, a supplier of commercial laundry machines, after the Department of Homeland Security issued guidance that didn’t include laundromats as essential businesses that could stay open during the lockdown. A week later, the administration issued new guidance adding laundromats to the list.

Dave Urban, a Trump adviser and confidant, has collected more than $2.3 million in lobbying fees this year. The firm he leads, American Continental Group, represents 15 companies, including Walgreens and the parent company of the Ultimate Fighting Championship, on coronavirus issues.

Trump pledged to clamp down on Washington’s influence peddling with a “drain the swamp” campaign mantra. But during his administration, the lobbying industry has flourished, a trend that intensified once Congress passed more than $3.6 trillion in coronavirus stimulus.

While the money is intended as a lifeline to a nation whose economy has been upended by the pandemic, it also jump-started a familiar lobbying bonanza.

“The swamp is alive and well in Washington, D.C.,” said Mike Tanglis, one of the report’s authors. “These (lobbying) booms that these people are having, you can really attribute them to their connection to Trump.”

The White House did not respond to a request for comment.

Shortly after Trump took office, he issued an executive order prohibiting former administration officials from lobbying the agency or office where they were formerly employed, for a period of five years. Another section of the order forbids lobbying the administration by former political appointees for the remainder of Trump’s time in office.

Yet five lobbyists who are former administration officials have potentially done just that during the coronavirus lobbying boom:

— Courtney Lawrence was a former deputy assistant secretary for legislation in the Department of Health and Human Services in 2017 and 2018. She became a lobbyist for Cigna in 2018 and is listed as part of a team that has lobbied HHS, Centers for Medicare and Medicaid Services and at least two other agencies. Cigna did not respond to a request for comment.

— Shannon McGahn, the wife of former White House counsel Don McGahn, worked in 2017 and 2018 as a counselor to Treasury Secretary Steven Mnuchin. She then joined the National Association of Realtors as its top lobbyist and is listed on disclosures as part of a team that has lobbied both houses of Congress, plus six agencies, including the Treasury Department. The Realtors association did not respond to a request for comment.

— Jordan Stoick is the vice president of government relations at the National Association of Manufacturers. Stoick’s biography on NAM’s website indicates that he is “NAM’s lead lobbyist in Washington,” where he started working after serving as a senior adviser in the Treasury Department. Disclosures indicate that Stoick and his colleagues lobbied both houses of Congress plus at least five executive branch agencies, including Treasury.

“NAM carefully adheres to the legal and ethical rules regulating lobbying activity, including ensuring that its employees comply with all applicable prohibitions on contacting their former employers,” Linda Kelly, the organization’s general counsel, said in a statement.

The group also said that the disclosure was filled out in a way that lumped the work of multiple lobbyists together in one entry and that the filing “in no way means every lobbyist contacted every listed office.”

— Geoffrey Burr joined the firm Brownstein Hyatt after serving as chief of staff to Transportation Secretary Elaine Chao. The firm’s lobbying disclosure for the first quarter of 2020 includes Burr on a list of lobbyists who contacted the White House and Congress on coronavirus-related matters on behalf of McDonald’s.

— Emily Felder joined Brownstein Hyatt after leaving the Centers for Medicare and Medicaid Services, where she worked in the legislative office. Felder is listed on a disclosure from the first quarter of 2020 that shows she was part of a team that lobbied Congress and the White House.

A spokeswoman for the firm said both Felder and Burr abide by the Trump administration’s ethics rules, which limit their lobbying to the House and the Senate.

“We are confident that our lobbyists are in compliance with all lobbying rules and applicable prohibitions and did not violate their Trump Administration pledge,” spokeswoman Lara Day said in a statement.

Public Citizen’s Craig Holman, who himself is a registered lobbyist, said the group intends to file ethics complaints with the White House. But he’s not optimistic that they will lead to anything. Last year, he filed more than 30 complaints, all of which were either ignored or rejected.

“There does not appear to be anyone who is enforcing the executive order,” Holman said.

FOX News was forced to admit to ‘accidentally’ cropping Donald Trump out of an image with Jeffrey Epstein.

In a statement on Monday, Fox News said, “On Sunday, July 5, a report on Ghislaine Maxwell during Fox News Channel’s ‘America’s News HQ’ mistakenly eliminatedPresident Donald Trump from a photo alongside then Melania Knauss, Jeffrey Epstein and Maxwell. We regret the error.”