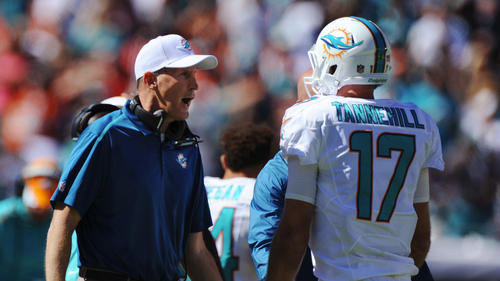 Miami’s head coach Joe Philbin stirred up a bit of a quarterback controversy last week when he would not commit to keeping Ryan Tannehill in the QB1 role. These so-called quarterback controversies are often overblown by the big media so they can have something to write about and ramble on about in 30 second sound bytes on TV. Players certainly don’t want to hear about these issues as they try to prepare for weekly games. Now that Philbin has opened up this can of worms, his whole team has to field questions about it now. Linebackers and wideouts are now faced with answering questions about how they feel about their starting QB. They would much rather be answering mundane questions about the upcoming game with bland clichés. But now they get the chance to say something unintentionally controversial to add fuel to the Tannehill fire.

Should the Dolphins head coach sit Tannehill this week against the Raiders? It wouldn’t be a bad idea since the guy is 1-4 in his last five outings, which goes back to last season. He is 16-19 overall since he came into the NFL. So he has not exactly overwhelmed the football world with his ability.

The bigger issue is whether Philbin or any NFL head coach should publicly talk about sitting their starting quarterback. Any criticism of the most important player on a football team should be carefully handled. Public criticism of a QB is never a good idea unless you are trying to destroy a guy’s confidence altogether and create problems in the locker room for the entire team. I understand trying to light a fire under a player who is underperforming. There is a place for that and Tannehill needs some extra motivation it appears. The added pressure might make him realize that he needs to get it together, and fast before he is relegated to another high draft pick that didn’t pan out. Or all this could backfire and Tannehill could play even worse and really have his team go down in flames along with his career. That is the more likely possibility.

I just don’t see how an NFL starting QB would need much public shaming in order to do his best. IfTannehill is not aware of how fortunate he is to be one of only 32 of the best quarterbacks in the world, then I don’t think he gets it at all. If that is the case, no amount of public criticism is going to make a positive difference. He has to know that if he does not perform, that he will eventually be replaced. How could a professional quarterback not be aware of that fact?

We will see how this plays out in Miami. I am guessing it will get worse for the team. Quarterbacks who lose more than half their games don’t usually turn it around to be Pro Bowl players. Joe Philbin may be thinking the same thing and went public as a last gasp to try and get something more from his leader on the field. Most other NFL coaches would not have done what the Phins coach did publicly. Most NFL coaches know they need to shield their QB1 from media criticism and certainly would never dog their own guy themselves.

Most NFL head coaches would rather lie to the media about how good their starting QB is than be honest about any shortcomings. The truth hurts and sometimes it is best to just lie or at least keep your true feelings more private. Instead of dogging a staring QB, most coaches will eventually just get rid of them and move on to the next guy. That is likely the best policy. An NFL quarterback that needs prodding to do his best is not the guy to lead a franchise anyway. Great QBs know exactly what is expected of them and should be able to motivate themselves. The next few games will let us know if Ryan Tannehill is that type of pro.