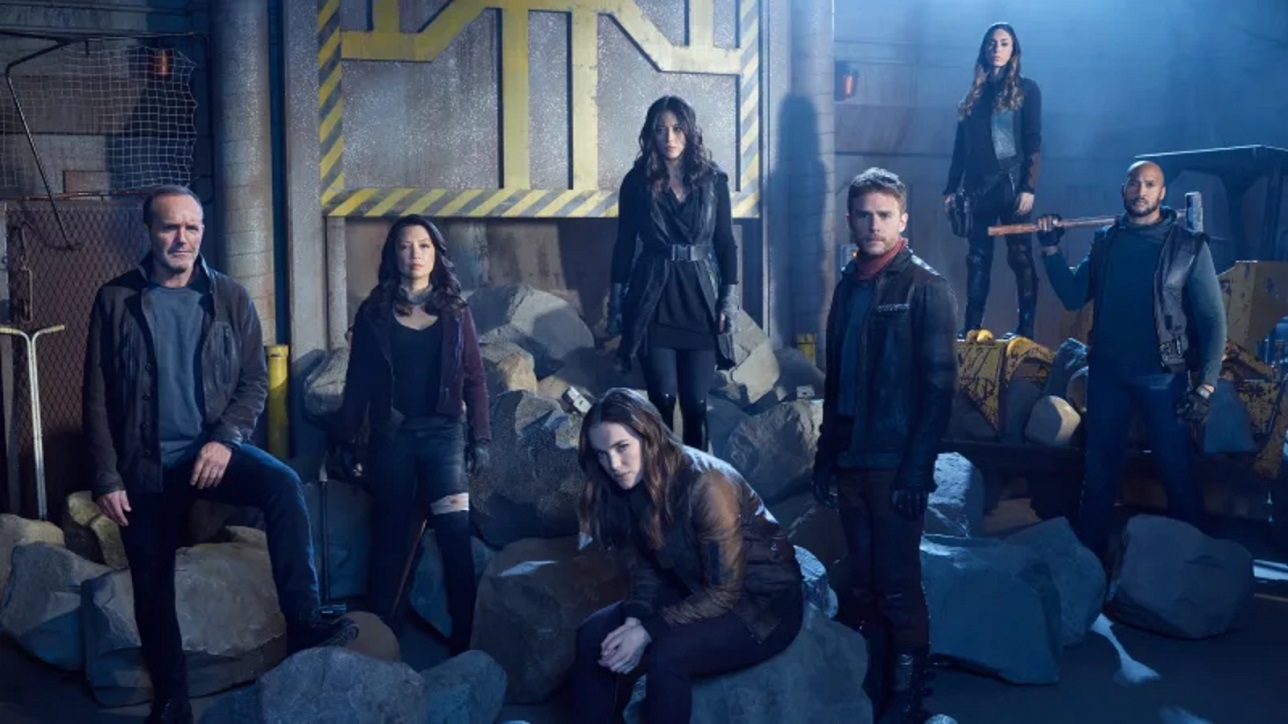 I didn’t actually start out intending to go the “Agents of SHIELD” panel; I tried to go to the Farscape reunion panel. Farscape has been off the air for quite a while, over a decade I believe, so I don’t think Comic-Con expected a large crowd. They put the panel in Room 7AB, which is not one of the giant rooms. Much to their surprise, fans lined up around the corner and down the hall and looped around again and again – in other words, there were WAY too many people to fit into 7AB.

I was one of those hapless people. They let me in to snap a few photos with my phone, so I got a quick glimpse of the cast and the packed room, but I only had my phone so it was more like photos of some blurry little heads at a table. Alas. I think I did recognize Ben Browder and got to hear him tell a bit of what was clearly an amusing behind the scenes story, but then I was compliant with the “take a few photos and move on” directive and had to do just that. Ah well.

So, I ran back down to Hall H and caught the “Agents of SHIELD” panel instead.

“Agents of SHIELD” made its last appearance in Hall H of Comic-Con, and it was an emotional panel for both the fans in the audience and the actors on the panel. They started out with a heartfelt thank you to the crew, who are always indispensable to the success of a show. Then they played a compilation video of each of the first six seasons of the show, with both emotional and kickass highlights of each. Fans reacted with applause as they relived some of their favorite moments, and then the actors weighed in too, sometimes giving some insight into their own memories of filming those moments.

The actors were emotional about the show ending. Jed said that they were right now filming the last episode and it feels like they’re going through the same thing that the characters are going through – their last mission.

Another cast member quipped, “the dragons look great…” and everyone laughed, but I think that joke was needed to break the sudden wave of emotion that swept through the hall as everyone thought about that.

Clark Gregg thanked the fans and his fellow cast.

Clark: For this incredible ride that has changed all our lives.

There was a sense in the room that everyone was grateful, and wanted this last chance to express that gratitude. They recognized and thanked one of their producers, Gary Brown, in the audience, who has been critical in keeping the show going, and they each looked back on their time with the show.

Clark: In the early days, it felt like every week we made a mini-movie. We made lifelong friendships, became family.

Maurissa Tancharoen: At the last table read this week, they put our first sides in them.

She started to tear up as she spoke, and her fellow cast members got emotional too. They clearly respect and care about each other a great deal.

Jeff Bell: All the cast are amazing on screen but all can do the quintessential chew gum and jump rope too, so it’s more than that.

There were some amusing moments too. Someone suggested a reenactment of a kiss scene, and Maurissa said “last time there was a suggestion like that Iain kissed Jeff instead.”

Henry Simmons said that some of his last scenes on the show were emotional for real.

Henry: It wasn’t just me acting. I took it personally. It was my way of saying how much I love them and how much I’ll miss them.

Jeff joked about how Henry ended up going from being in a few episodes to becoming the Director of SHIELD.

Jeff: There was this scene with Henry working, wearing a flannel shirt, and we looked at him and we were all like “ka-ching”

Henry: I never thought I’d become the Director. When they went to find me to tell me, I thought they were looking for me to tell me I was being killed off – so I ran away!

Natalia Cordova-Buckley talked about filming an emotional scene with Henry sobbing over losing his child, and her character sobs with him. She said they were sobbing for real, then had to keep stopping so they could remove more furniture, then pick it up again (which must have been next to impossible)

Iain was asked about being the “big bad”. He responded by singing ‘you don’t know what you’ve got til it’s gone’.

Everyone: Ain’t that the truth!

Seemed particularly relevant for a show going into its final season – I think the fans are determined to cherish the last season, just as the cast have clearly done while filming it.

Jeff Ward joined the cast in S5 as Deke. He apparently stole the part in a table read for a side character who was killed off. He was so good, everyone else was like oh no, he died:? So they wrote him in!

Jeff:  I’m trying not to cry right now. They care about what we’re doing and about each other. To be taken in by this family was special to me… I love them.

Clark Gregg summed it up as they ended with a teaser reel for the final season.

Clark: Getting to say goodbye to these characters, that’s real emotion. The membrane between real and fictional is thin for us.

Gregg’s comment was a fitting way to end the panel. He was talking about how the cast has come to feel about playing these characters, as well as the way the actors have come to feel about each other. There’s real affection and respect there, so saying goodbye was difficult. The comment was fitting for the fans too. When you really love a show, those characters do become real to you. Not in the sense that you lose touch with reality and think they’re standing next to you, but in the sense that they cross that boundary into your real life to inspire you, and to create a sense of community with other fans who are similarly inspired.

This Comic-Con is an emotional one for many fans because their favorite shows are coming to an end, and there’s a sense of ‘let’s cherish this while we have it’ in the air. I feel it for my favorite show, Supernatural, which is also ending after its next season. I enjoy “Agents of SHIELD”, but I couldn’t help but think about this panel also as preparation for Supernatural’s last Hall H panel this weekend  I have a feeling there will be even more tears in that one, so stocking up on tissues for Sunday!

The Farscape panel that I didn’t get to attend was a bit of a comfort, however. Silver lining, yada yada, I’m trying! The show had a passionate fandom when it was on the air. I remember reading some amazing fanfic and enjoying analyzing the show with fellow fans. I even when to a convention once, many years ago. I was never a fan like I am of Supernatural (pretty sure that’s a once in a lifetime thing for me) but I was a fan. And here we are, over a decade later, and those passionate fans are still passionate enough to stand in line hours early to see those actors again and talk about that show they loved again. Obviously, it’s different. It’s not Hall H, it’s not all the actors, it doesn’t happen very often. But once you’re a fan of something, that doesn’t go away. I took some solace in that, thinking about this being the last year of “Supernatural.” Pictured myself a decade from now hugging a hundred people who I haven’t seen in a long long time as we all wait in a surprisingly long line to once again celebrate that little show we so came to love.