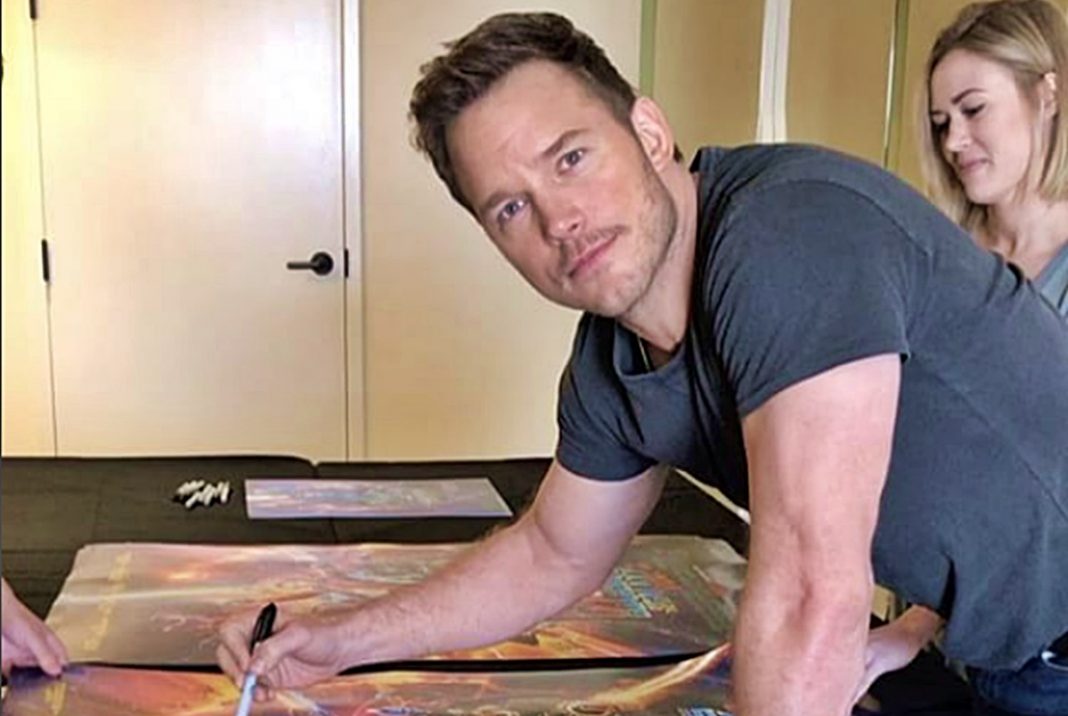 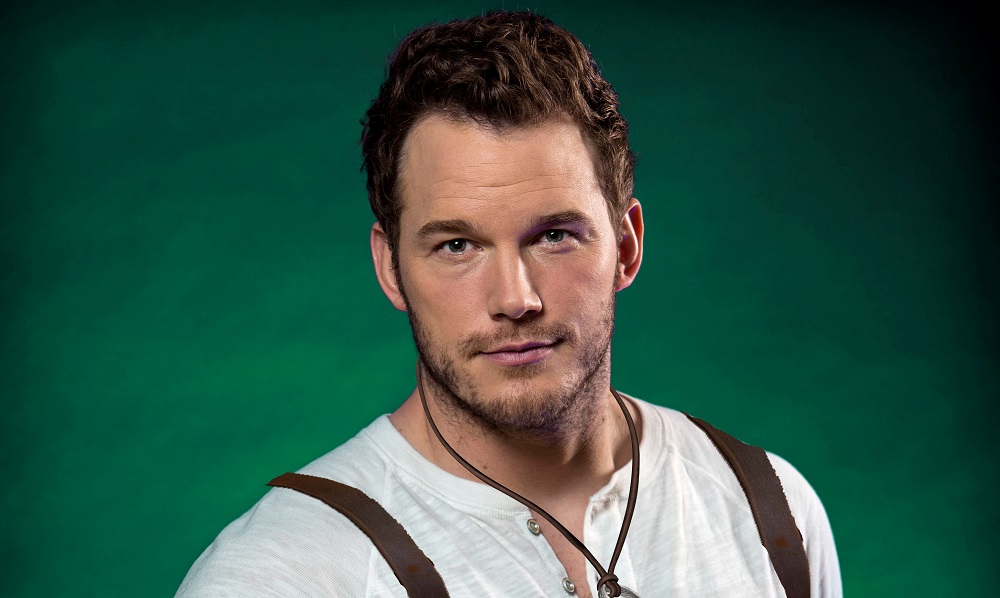 Chris Pratt hasn’t forgotten how in less than three years, he’s gone from being the underdog to an A-list movie star having landed roles in three of Hollywood’s hottest franchises.

“Guardians of the Galaxy,” “The Lego Movie,” and “Jurassic World” have taken in close to $3 billion in worldwide box office receipts surpassing studio expectations and securing a comfortable future for the actor.

He’s not afraid to speak his mind either comparing Marvel Comics with DC Comics.

“I really like all the Warner Bros. movies,” Pratt said at last week’s Guardians of the Galaxy Vol. 2 press junket. “I think they’re really cool and I’m not a real tough critic on those movies. But one of the flaws might have been they were introducing too many characters in Suicide Squad. They spent 10 minutes telling us why should we care about these characters, rather than creating trilogies for each character and convincing us to care about the characters.”

The actor had high praise for Marvel’s take on properties.

Like all actors, watching the film you’ve worked on for the first time on the big screen can be nerve wracking. This is what he had to say about checking out “Guardians of the Galaxy Vol. 2.”

“I saw it about a week and a half ago for the first time, and last night was the second time. I was so relieved when I saw it because I knew the script. The movie is exactly how the script read. When I read the script, I knew it was good. But there’s so much stuff that can happen between reading the script, and then watching the movie, you know? There’s so many moving parts, some of which I’m responsible for. So, I when I went to see it, I said, “Please still be good.” I was just relieved to see that the movie was as good as the script.”

He didn’t know what to expect with how his Star-Lord would transition from the original “Guardians of the Galaxy” to the latest in the franchise. We all know how sequels can oftentimes suck.

“The idea was mind blowing. It was next level to me. And, understanding the nuances I was allowed to play as this character, which is different from the first movie. I mean, there were certain emotional tones in the first movie with Peter Quill with his mother, , IMeredith, with that side of his origin. But this new story, feeling the reality of his biological father, and this guy that he’s built up in his mind.It’s a very contemporary story, and there are a lot of kids that are will relate to his character. Kids whose dads weren’t around. Kids who have another man in their life who’s been responsible for raising them. How can take relationships for granted that aren’t those relationships we have built up in our mind.James Gunn told me the whole script when we sat down a couple years ago. I was the first person to hear it. I was crying at the end.” 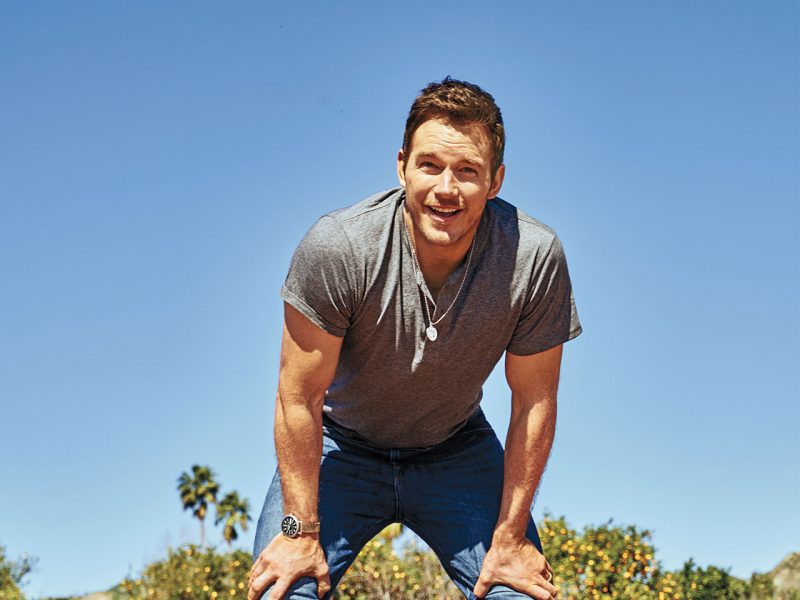 It couldn’t have come at a better time for the 37-year-old actor either. It wasn’t too long ago that Pratt and his wife, “Mom” actress Anna Faris, had more time to pick and choose what they wanted to do next.

“For the first part of our relationship, we put our careers at the top,” Pratt said. “We were like, ‘Honey, if you get a job and you have to go to Istanbul for 6 months, you’re going. I’ll help you pack. I’ll Skype with you every day. You’re living your dr; I’m living my dream. That’s what we do.'”

Now, they’ve got their 4-year-old son Jack to consider and having a handle on the next few years is helpful. They can actually plan where they will be from month to month and strategize which jobs make sense – a luxury not often afforded in the capricious world of acting. It also means saying no to a lot. 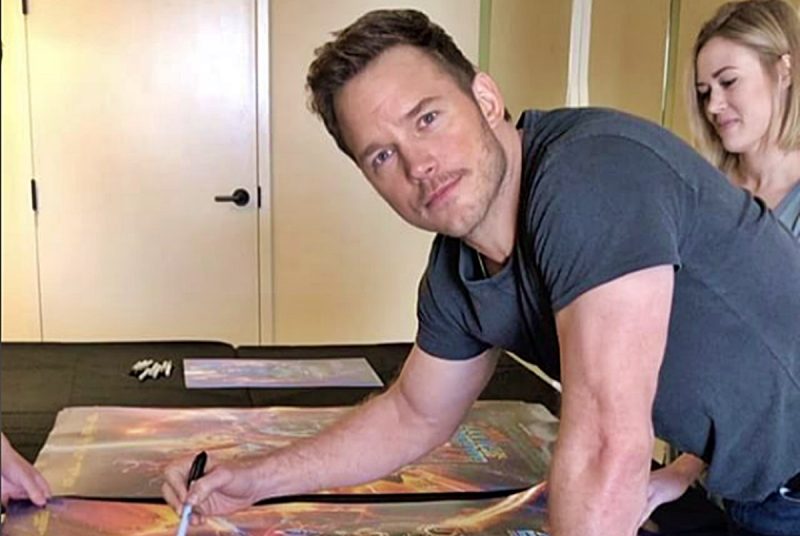 One of those no’s can be to fans that demand he take a selfie with them.

“I’ve always been a pretty deferential, go-with-the-flow guy. But now I have to be economical with my time,” he said.

“If I go out and want to do normal things, I have to be comfortable disappointing people. So I just don’t take pictures with people. Because that’s not about enjoying the moment; it’s about stealing the moment to brag about later,” Pratt explained.

Now, when he’s asked to take a picture in public, he responds, “‘Would you settle for a handshake?’ And then they take the picture anyway.”

One of the perks he takes advantage of now is smoking the occasional cigar on set.

“The Brits are so polite. There I am, smoking these little cigars on the set and it is, in fact, illegal,” he said. “But they were so reluctant to finally say, ‘I’m very sorry, but I’m afraid it’s against the law.’ And I said, ‘No, no, that’s cool — just tell me when the cops come.’ “ 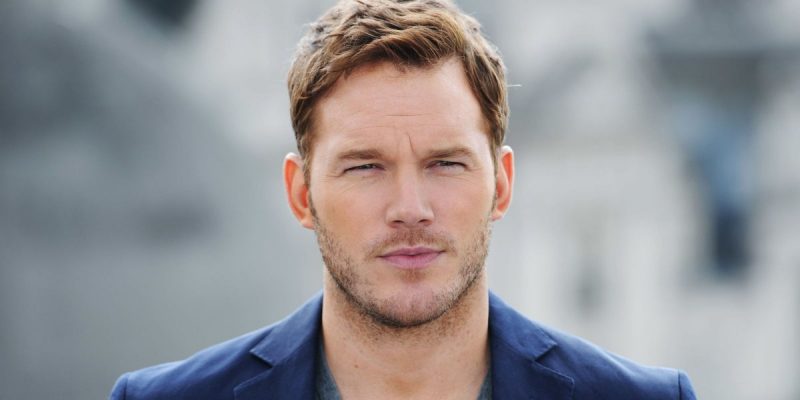 “There is no big role that Chris doesn’t pass on because there’s no one that doesn’t want Chris in their movie because he truly is the biggest movie star in the world right now,” said “Guardians” franchise director James Gunn. “He’s not going to say that, but that’s the truth. He gets to do what he wants.”

Pratt does have ambitions outside of the blockbuster genre. He’s written a script (but not necessarily for public consumption) and would like to eventually direct something he’s written. One of his goals, to tell the stories of blue collar America, got him into a bit of trouble recently after he told Men’s Fitness magazine that he thinks that segment is underrepresented in Hollywood movies. A barrage of snarky headlines and tweets followed quickly from many wondering why a white man might think that.

Soon after, the social media savvy Pratt tweeted that it was a “pretty stupid thing to say.” Pratt is someone who just wants to make the people around him happy and comfortable, whether it’s on set, or through a tweet.

Before the controversy erupted, the always genial Pratt said that one of his strengths is being able to come into a situation with “a contagious attitude worth catching.” 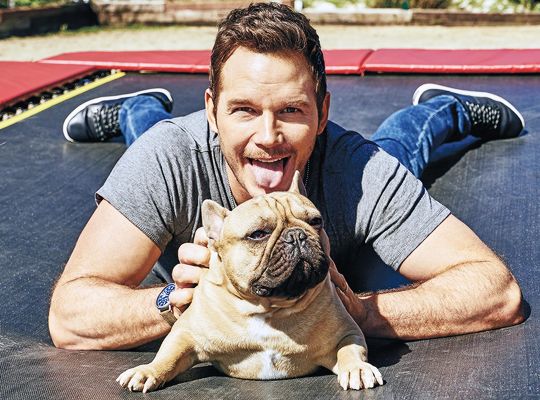 Pratt has the easy coolness of someone who is proud of his latest work and is comfortable in the spotlight. The film about Marvel’s intergalactic misfits was also once an underdog that not only exceeded hopes when the first one was released in 2014, but then, instead of lazily coasting on goodwill, hit its stride in the sequel, which might surprise audiences with its touching emotional core.

For Pratt’s character, the roguish Star Lord/Peter Quill, it means meeting his real father for the first time, Ego (Kurt Russell), while considering the tough-love upbringing of his de-facto father figure, Yondu (Michael Rooker) – someone who actually reminded him of his own dad.

“Ah man, everyone on my team, everyone who’s been hanging out with him, they’re either just like, “He’s such a great dude.” And, he really is.  I’ve heard a few people say, “It really feels like you guys could be father and son.” We share a lot of the same passions. He’s a really cool guy. He’s a really open book. Definitely, you know where you stand with him. He tells it like it is. And, I really like that.”And then there is a pause. The nose scrunches, the smile widens and Pratt reveals he’s like everyone else.“Kurt Russell. Obviously, he’s this iconic dude, who I’ve known about for decades before he ever knew I existed. There’s always that strange moment when you meet someone, and you’re a big fan. You feel like you have to tell him, because otherwise you try to build a friendship and it’s a little inauthentic. You just say, “Listen, I have to get this part out of the way, but I love you SO much. You’re the best. You’re the best. You’ve always been the best.”And Kurt says, “Yeah, I know. Thanks.” 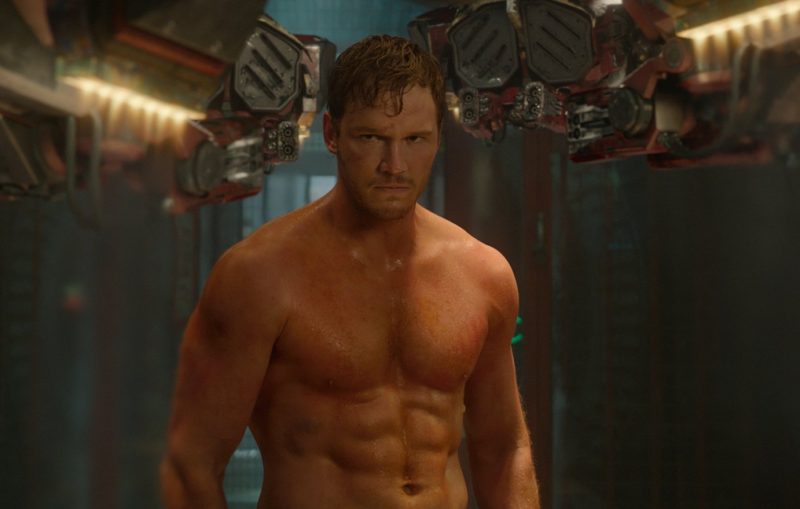 One area that Pratt realizes he is an inspiration is with how he was able to transform his body into what it is now.

“Don’t be hard on yourself if you can’t lose weight and can’t keep it off. That’s just really natural.  I think the best thing, the best way to think about it, is not to have a weight goal. Do you know what I mean?It’s not to say my goal is 225 pounds. That’s not my goal. My goal is six months. It’s six months of consistency. Go to the gym, or do something every day for six months. See if I can do that. Make the goal, a consistency. Build up a bunch of consistency and make it more of a lifestyle, rather than seek out a weight goal.”

“I just did it a couple weeks ago. I had like a photo-shoot for Men’s Fitness or something, and I made that my goal. I worked hard for weeks and weeks and weeks. I got in great shape. I felt good. I did the photo. Three days later I put on 20 pounds. Just  because I was so goal-oriented!  You hit that goal and you’re like, “Nailed it! Let’s eat! Let’s eat just a little bit, and then six weeks have passed and I’m, “What did I do? Why did I do that?” So, it’s natural to kind of go up and down.” 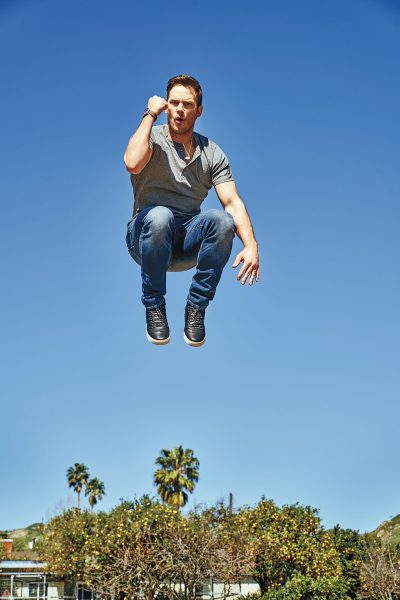 In his 17-year career in film and television, Pratt has dipped into a lot of genres that has allowed him room to hone his craft in different corners of storytelling. He’s done sitcoms, rom-coms, sports dramas, futuristic indie breakup stories, nail-biting war films, twisted high school horrors, Westerns, space romances, space actioners and dinosaur adventures. He’s worked with a murderers’ row of directors and writers from Kathryn Bigelow and Spike Jonze to Aaron Sorkin and Diablo Cody. Even “Guardians of the Galaxy Vol. 2,” which could be easily dismissed as just another superhero film, checks off a number of boxes: adventure, space opera, comedy and family melodrama.

And while this particular moment means Pratt is having to say no more than yes, he hasn’t regretted any of his choices thus far.