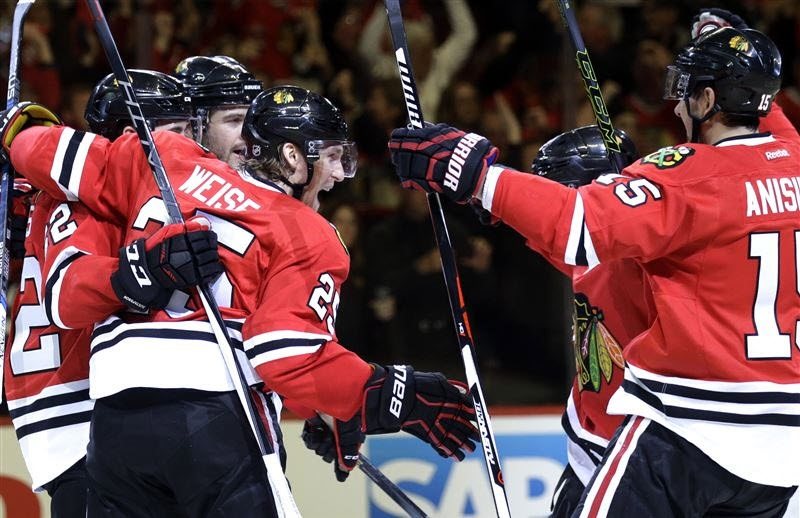 The Chicago Blackhawks may have been pushed to the brink of elimination, but they were able to squeeze one more game out of the St Louis Blues giving them some major momentum heading into Game 7.

It’s not a must-win situation yet for the Anaheim Ducks, who’ll also be trying to wrap up their first-round series on the road.

The defending Stanley Cup champion Blackhawks are trying to climb back from a 3-1 series deficit. They erased an early two-goal deficit in Game 6 and then some, scoring five unanswered goals in a rout that evened the series against the Blues.

On the flight home, Blues coach Ken Hitchcock pondered what went wrong in the 6-3 loss and felt better before the plane landed. He said momentum means nothing entering Game 7.

Heading into Monday’s showdown (8 p.m. EDT, NBCSN), history is against the Blues, who have lost in the first round the last three seasons. Roster turnover means not everybody is carrying around that burden, though.

The Blackhawks escaped deep deficits their last two Cup seasons, coming back from 3-2 down to beat Anaheim in the Western Conference finals last spring, and beating Detroit in the conference semifinals in 2013.

So, they’ve got a big experience edge: just three Blues have played a Game 7.

“I love playing in big games,” Chicago defenseman Brent Seabrook said. “The bigger the game, the better I feel like I get ready or up for. This is the best time of the season.”

Now, the pressure perhaps shifts to the Blues.

“They’re going to be excited,” defenseman Duncan Keith said. “So I think we’ve got to draw upon that experience and use some of the momentum we’ve got from last game and try to carry it over and take it from there. First shift, first five minutes, and keep it going.”

The Blues have blown a 3-1 series lead just once, in 2003 to Vancouver in the first round. But in the last four series they’ve lost since 2012 they’ve bowed out meekly.

Hitchcock hinted at possible lineup changes. But he’s sticking with goalie Brian Elliott, who’s played every game after a dominant finish to the regular season.

“There’s no bad goals,” Stastny said. “He’s made the big saves when he’s had to, and sometimes whether it’s an odd-man rush or a rebound or we just lose our coverage, the goalie’s not at fault.”

Hitchcock defended his use of star forward Vladimir Tarasenko, whose ice time was down in Game 6. Tarasenko appeared to confront Hitchcock when the team left the bench after the second period Saturday night.

Hitchcock said Tarasenko plays a heavier game so needs shorter shifts, and noted he doesn’t kill penalties. Nobody thought there would be lingering animosity.

“Knowledgeable hockey people don’t look at time, they look at shifts, and shifts matter,” Hitchcock said. “The game he plays is a physical game. It’s at the puck, it’s around the puck, it’s one on one, and it’s very demanding.”

Anaheim’s 5-2 victory Saturday was the first by a home team in this series, so that could mean there’s not much of an advantage for Nashville in Game 6.

Still, the Ducks realize it’ll be tough to close this one out.

“We know we’re going into a hornet’s nest,” coach Bruce Boudreau said. “I’m sure they’re sitting over there saying, ‘If we get it to a Game 7, we win.'”

Before Game 5, the road team had outscored the home team 13-5.

The key for the Ducks has been goalie Frederick Andersen, who has won three straight games.

“There have been pockets of time where you just know nothing is going to beat him unless it’s something he can’t see,” Boudreau said. “Hopefully, he can continue playing like that.”

“I don’t think a single guy in this room didn’t think we’d be in this position,” forward Ryan Kesler said.

The Predators have lost three straight since losing right wing Craig Smith (lower body) in Game 3. He skated Sunday in Nashville but is still listed as day to day.

Getting Smith back would be a big boost for Nashville given he has eight points in 11 career postseason games.

“We have to throw everything we’ve got,” forward Ryan Johnson said.