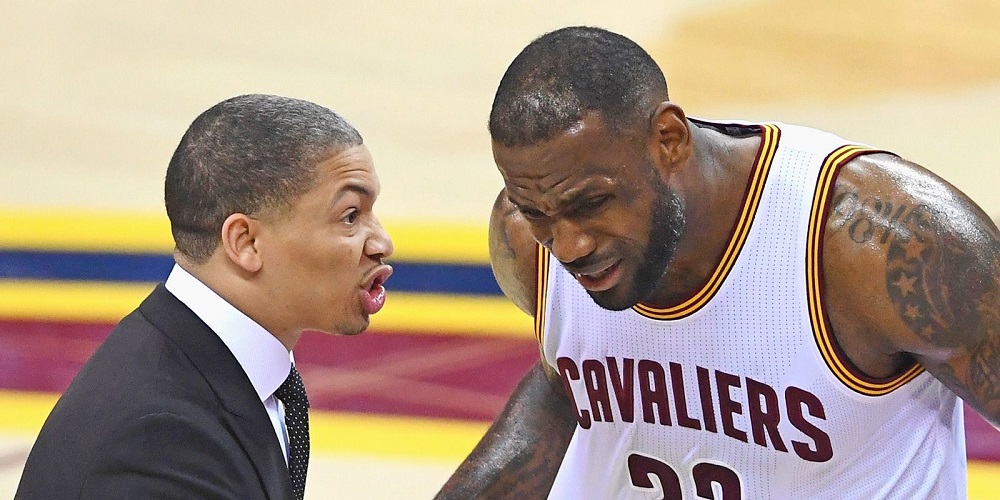 With only 13 games left in the NBA regular season, Cleveland Cavaliers head coach Tyronn Lue is taking a leave of absence, citing personal health issues. The announcement comes as a shocking end to a week that saw Lue stay in the locker room after halftime against the Chicago Bulls with an undisclosed illness.

Lue announced Monday morning in a statement that he has been having “chest pains and other troubling symptoms, compounded by a loss of sleep” throughout the season. The Bulls game was the third game this season that Lue has missed at least part of due to illness and health issues.

“After many conversations with our doctors and [General Manager] Koby [Altman] and much thought given to what is best for the team and my health, I need to step back from coaching for the time being and focus on trying to establish a stronger and healthier foundation from which to coach for the rest of the season,” said Lue in a statement. “I have had chest pains and other troubling symptoms, compounded by a loss of sleep, throughout the year. Despite a battery of tests, there have been no conclusions as to what the exact issue is.”

Associate coach Larry Drew will lead the team in Lue’s absence. While the statement Lue released seems to point promisingly towards a return this season, that would be quite the quick turnaround with the playoffs right around the corner in April.

“While I have tried to work through it, the last thing I want is for it to affect the team,” continued Lue’s statement. “I am going to use this time to focus on a prescribed routine and medication, which has previously been difficult to start in the midst of a season. My goal is to come out of it a stronger and healthier version of myself so I can continue to lead this team to the championship we are all working towards. I greatly appreciate [owner] Dan Gilbert, Koby Altman, and our medical team and the organization’s support throughout.”

After the Bulls game, Larry Drew held the coach’s presser in Lue’s place, and when asked why Lue wasn’t able to return to the court, Drew’s answer gave a sort of foreshadowing of things to come.

“I’m not sure exactly what it is, I just know that before coming out in the second half, he wasn’t feeling well,” said Drew when asked about Lue’s condition. “I don’t know if it’s impacting the team. I think, particularly at this stage of the season—this is the last day of a 13-day road trip—certainly some elements are going to come up. Sometimes these things, they come up and are unavoidable, and you just have to deal with it, but we know as a staff, if he’s not feeling up to par, we have to step up, and that’s just what we did.”

Of course, the coaching staff and players will have to step up more than ever now as Lue steps aside for the foreseeable future. While there has been a lot of debate over the years as to how much power and control over the team Ty Lue actually has compared to LeBron James, he’s still the head coach, and losing him will have an impact on the team overall. Even though their relationship is highly debated, LeBron will be the first to tell you that.

“It’s like losing one of your best players, obviously—the guy who’s the captain of our ship, who’s been running things the past three years,” said LeBron. “We worry about his health, obviously. That’s way more important than the game of basketball. We know he’s been doing everything he needs to do to stay healthy, take even more measures to get himself right. Everything that’s been going on with our year, it’s just another one. It doesn’t catch us off-guard because he’s been dealing with it for so long now, but anytime he doesn’t come back to the bench, it’s just an alarm going off.”

As LeBron said, Lue and his health are much more important than basketball, especially when it looks like this season isn’t getting any better for Cleveland. With 13 games left and only 3.5 games separating the Cavs from the No. 8 seed Miami Heat, anything can happen.

As it stands right now, the Cavs are sitting at No. 3 in the Eastern Conference with only a half-game lead over the Washington Wizards. If the season ended tomorrow, they would find themselves up against the Philadelphia 76ers in the first round, which won’t be an easy opponent for the struggling Cavaliers. The Milwaukee Bucks and Indiana Pacers could prove equally formidable opponents should it come down to it.

Of course, coach or no, I still wouldn’t want to face LeBron in the playoffs—especially in the first round.