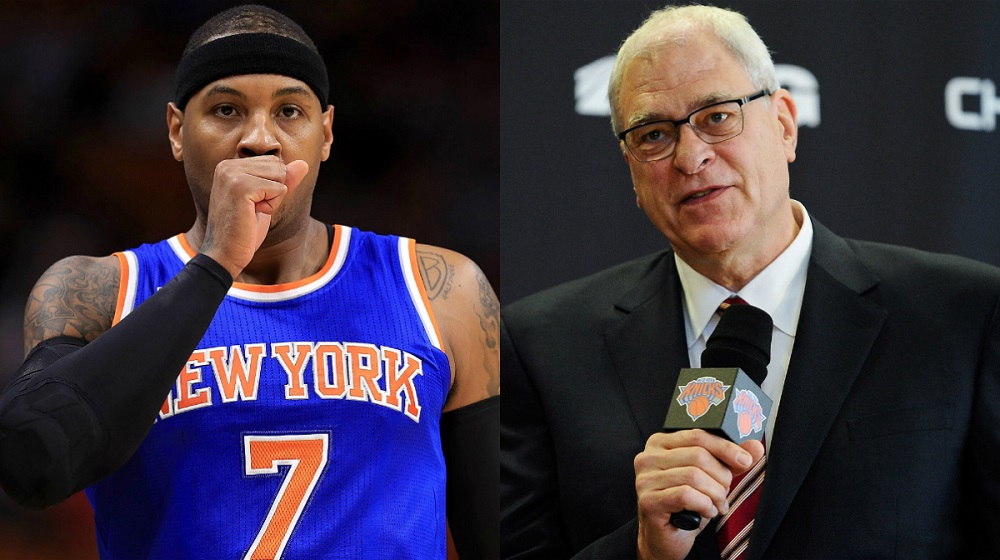 Since he made his infamous “posse” comment regarding LeBron James and his business associates, New York Knicks President Phil Jackson and superstar Carmelo Anthony have been at each other’s necks completely via public statements.

Melo wanted to stay out of the drama; however, after Jackson accused Anthony of holding the ball for too long, Carmelo felt the need to speak out.

“Carmelo, a lot of times, wants to hold the ball longer than—we have a rule, if you hold a pass two seconds, you benefit the defense,” said Jackson when talking about the team’s offensive strategy. “So he has a little bit of a tendency to hold the ball for three, four, five seconds, then everybody comes to a stop. That is one of the things we work with. But he has adjusted to it, he knows what it can do, and he’s willing to see its success.”

Jackson, a legendary basketball coach, has 11 NBA Championships from his years with the Chicago Bulls and Los Angeles Lakers. Regardless of Jackson’s expertise, Carmelo doesn’t like the name dropping—it’s nothing but a distraction.

“I just want to continue to do what we’re doing—playing ball,” said Carmelo, finally speaking out on Jackson’s talking. “We’re playing good basketball now. To have a temporary black cloud…I know it happens—it’s New York and something I know. It’s not something I expect [from Jackson]. I didn’t talk to him. I didn’t know where he was coming from. He wants to talk about it, cool. If he doesn’t, cool. In my eyes, it’s over to me.”

Well, Jackson and Melo did meet to talk about it. That meeting, however, was short-lived (about two minutes by some reports).

“That was my question was, ‘Why?’” said Anthony of the brief meeting. “Regardless of the context of the interview or conversation, just why? Regardless of what you said, why every time my name come up? He explained that.”

Call me skeptical, but I doubt two minutes is enough to solve anything. More to come, sadly.