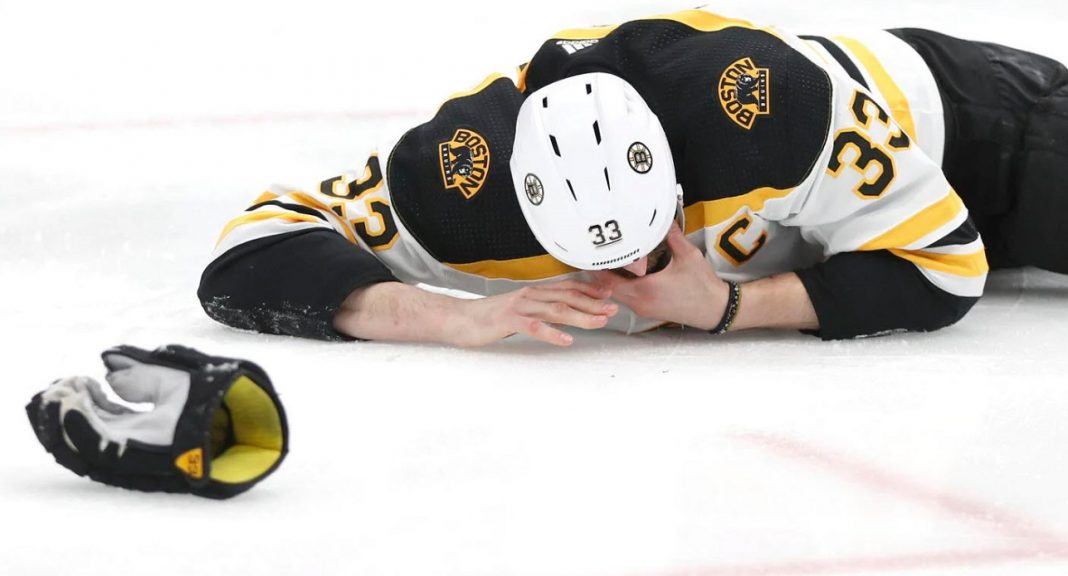 St. Louis Blues keep knocking out Boston Bruins players for the win in the Stanley Cup finals, but captain Zdeno Chara doesn’t look like he’s ready to be counted out of game 5 on Thursday. He skated with the team in the afternoon and answered two questions.

What is his biggest challenge in playing with this kind of injury?

“At this time of the playoffs, everyone has injuries and there are challenges that you have to overcome to play. I’m no different than any player on either team.”

How did he weigh the risk of further injury when deciding whether to play?

That doesn’t answer whether he’ll be on the ice for Game 5, but it sounds promising to Bruins fans. Game 5 will be on Thursday evening.

Twice the Boston Bruins have been forced to finish a Stanley Cup Final game down a defenseman. The St. Louis Blues won each time.

That’s not a coincidence.

Wearing out opponents and winning the war of attrition has been an ingredient of the Blues’ playoff success. They took advantage of injuries to San Jose’s Erik Karlsson, Joe Pavelski and Tomas Hertl to move on to the final, and with Boston potentially without captain Zdeno Chara for Game 5 Thursday St. Louis is now two victories away from lifting the Stanley Cup as the healthier team.

“We can see it throughout games and throughout series,” Blues captain Alex Pietrangelo said Wednesday. “It’s tough minutes to play against our forward lines when they’re playing the way they can. You can see the momentum we create by our line changes in the offensive zone, we’re just using all four lines. If I was a defenseman, that would be tough to defend against.”

Chara did not go to the arena at all Wednesday, 36 hours after taking a puck to the jaw in Boston’s Game 4 loss that tied the series at two games apiece. Coach Bruce Cassidy didn’t talk to and only briefly texted with the 42-year-old defenseman, who has a facial injury that has been reported to be a broken jaw.

Just like the Sharks series in the Western Conference final, the Blues insist their game plan doesn’t change depending on who’s in or out of the lineup on the other side. That includes Chara, even though missing him on the penalty kill and defensively could make a big difference.

“We prepare for a game from our side,” Conn Smythe Trophy candidate Vladimir Tarasenko said. “We can control our game. We don’t know what’s gonna happen if he’s gonna play or no. We just follow our plan. That’s it.”

The absence of Chara could prove to be the tipping point in a bruising battle between the Bruins and Blues. Boston defenseman Matt Grzelcyk is out with a concussion and St. Louis forward Robert Thomas is out with a suspected hand or wrist injury. Cassidy said Grzelcyk, who practiced in a no-contact jersey Wednesday, is still in concussion protocol and would need to be medically cleared in order to play in Game 5 on Thursday night.

If Boston is without two of its top five defensemen in Chara and Grzelcyk, it would mean bigger roles for John Moore and Connor Clifton and the possibility of Steven Kampfer seeing his first action since Game 1 of the East final. And the Bruins’ entire approach would change.

“You lose a little bit of your team defense, well, maybe you’ve got to create more offense to balance that out,” Cassidy said. “You got a guy that kills penalties well, maybe stay a little more disciplined. Down the line of how can you make up for what he brings without one guy going in there.”

Meanwhile, St. Louis is relatively healthy except for Thomas. The Blues got defenseman Vince Dunn back for Game 4 after he missed almost three weeks after taking a puck to the face in the West final, and he assisted on a goal and drastically improved their puck movement.

“He’s a dynamic player,” coach Craig Berube said. “He can make something out of nothing a lot of times. He’s very good at that. He’s elusive and even coming out of our own end, you feel like there are times when the puck is going to get stopped up and he’ll do something and make a move and a quick play with the puck that breaks a guy out and it’s a great play that we’re going up the ice now.”

It appears rugged Robert Bortuzzo will return to the Blues’ lineup in place of Joel Edmundson, who had his ice time reduced for performance reasons by coach Craig Berube in Game 4 . Bortuzzo came out when Dunn was ready to return but has two goals in the past two rounds despite not being much of a scorer.

Cassidy and Berube have been matching wits all series with roster decisions. From this point on, the right and wrong calls could determine the Cup champion, and the Bruins have faith in Cassidy to push the right buttons and compensate for injuries.

“He kind of knows how to get guys going,” center Patrice Bergeron said. “He has a good read and a good feel on how to do that and how to handle it.”

Berube has tweaked far more in this series than previous rounds, all the while counting on St. Louis to not stray from its straightforward game that thrives off punishes opponents.

“We have to keep pounding them,” forward Patrick Maroon said. “We just got keep doing the same thing. Our team’s not flashy at all. It’s north/south. Dumping it in. Wearing teams down.

“When we don’t do that, their defense is effective in moving up in the play. Odd-man rushes. The D can jump higher. When we’re doing well, we’re limiting their time and space. We’re wearing them down.”