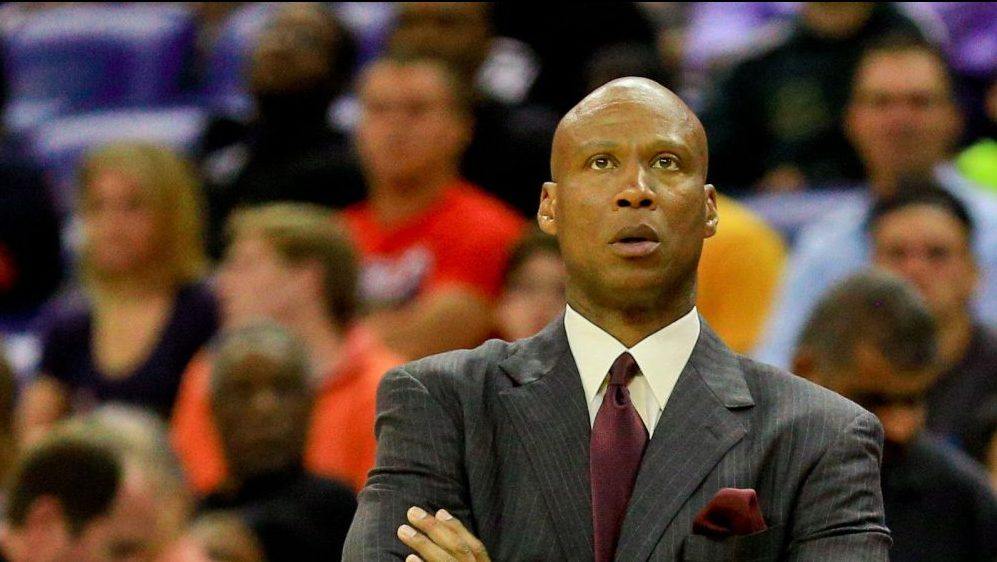 The Los Angeles Lakers fired head coach Byron Scott after the Lakers posted a franchise-worst 17-65 record. Scott coached the Lakers the last two seasons (2014-2016) with a total record of 38-126. Below are a few graphs detailing his win/loss coaching record per year, the Lakers shooting percentages under Scott as well as the Lakers team stats from the last two seasons. You don’t really need those to understand why the Lakers have fired him, but graphs and pictures are always nice.

Byron Scott will not return to coach the Los Angeles Lakers next season, the team announced late Sunday night.

Scott coached the Lakers for the two worst seasons in the 16-time NBA champion franchise’s history, going 38-126. The Lakers are making another break from the Kobe Bryant era by firing the coach who shepherded the superstar guard’s farewell season, but couldn’t coax many wins out of an otherwise dismal roster.

Los Angeles finished with the NBA’s second-worst record at 17-65 this season, losing four more games than in its previous franchise-worst season in 2014-15.

“We would like to thank Byron for his hard work, dedication and loyalty over the last two years, but have decided it is in the best interest of the organization to make a change at this time,” general manager Mitch Kupchak said in a statement.

Scott understood that his job was in jeopardy last week. He won three NBA titles as the shooting guard for the Showtime Lakers of the 1980s, playing alongside Magic Johnson, Kareem Abdul-Jabbar and James Worthy on some of the greatest teams in league history.

“This is my dream job, and obviously, you want the opportunity to turn it all around,” Scott said. “But I understand the business of basketball, and it’s all about wins and losses.”

Scott received praise from Kupchak last week for his handling of the final months for Bryant, who was Scott’s teammate during his rookie season with the Lakers 20 years ago. Bryant scored 60 points in his final game April 13, a win over Utah.

But the Lakers struggled to play competent defense or to put together coherent game plans over the past two seasons with a roster of youngsters and unimpressive veterans.

“Guys that know me know I’m not happy with the way we played as a basketball team,” Scott said last week. “I think we could have been a lot better if we had really honed in on some of the things we needed to hone in on early. But that’s kind of the price you’ve got to pay with young guys, too. It takes some young guys a bit longer to develop, but the bottom line is the record, and that’s what you judge guys by.”

Scott had two seasons with team options left on his contract.

The Lakers are now looking for their fifth head coach since Phil Jackson left in 2011. Mike Brown and Mike D’Antoni were fired before Scott, with interim coach Bernie Bickerstaff also getting a short run.

Scott is a veteran head coach with previous tenures at New Jersey, New Orleans and Cleveland. He led the Nets to two NBA Finals in his first head job, and he won the NBA’s Coach of the Year award with the Hornets in 2008.

The Lakers waited to fire Scott while two top candidates for head coaching positions took other jobs. Tom Thibodeau landed in Minnesota, and Scott Brooks was hired by Washington.

Lakers fans have been intrigued for months by the prospect of hiring Luke Walton, the championship-winning Lakers forward who is an assistant coach on Steve Kerr‘s staff at Golden State. The 36-year-old Walton, who played nine seasons in Los Angeles, coached Golden State to a 39-4 start to the season while Kerr was sidelined by a back injury.

The Lakers’ new coach will inherit a young, patchwork roster with a core of intriguing talent. Russell, Randle and Clarkson are all solid players, and the Lakers will keep their high draft pick if they finish in the top three of the NBA draft lottery next month.

The Lakers also will have more than $40 million in salary cap room to offer free agents, and Scott’s absence could help there as well.

The once-glamorous franchise has been incredibly unsuccessful in attracting or keeping marquee free agents over the past four seasons, even losing Dwight Howard and Pau Gasol to other teams for relatively modest contracts. But the departures of Bryant and Scott with the installation of a credible head coach could prove more enticing to stars interested in the added benefits of playing in the Hollywood spotlight.