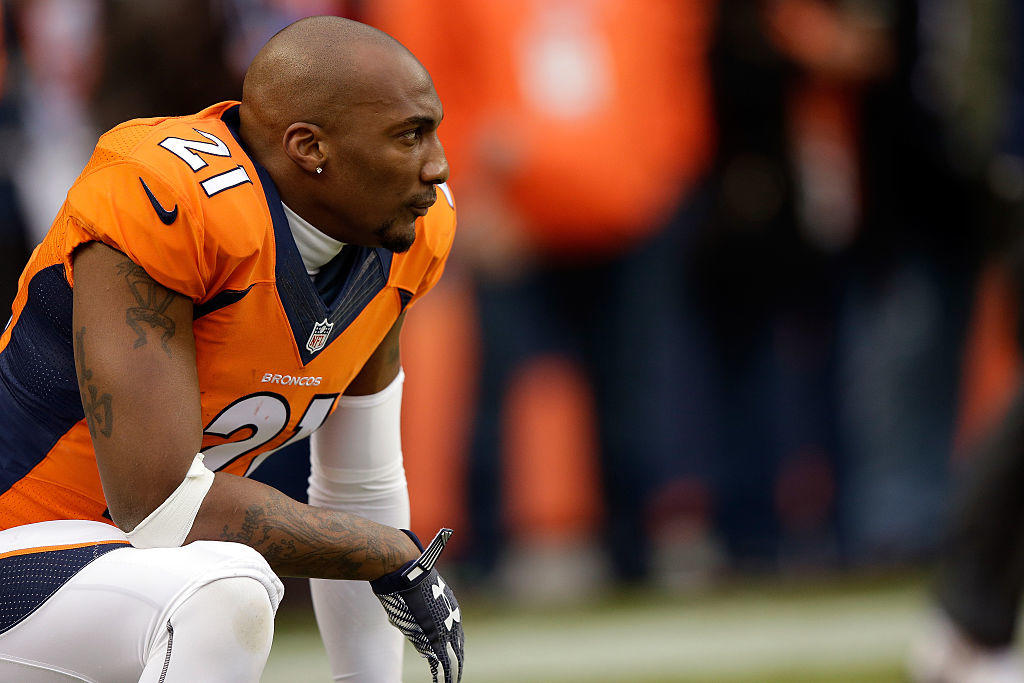 The city of Dallas, Texas tried to take another professional athlete from us. First, Bryce Dejean-Jones of the New Orleans Pelicans was shot and killed while breaking into the wrong apartment. This time, Denver Broncos cornerback Aqib Talib was shot in the leg.

The Pro Bowl DB was hit in the lower right leg Sunday night and is recovering in Medical City Hospital in Dallas, where his offseason home is. Talib was one of three people shot at Vive Club in Dallas.

Both head coach Gary Kubiak and general manager John Elway have been in touch with Talib, and he is said to be doing just fine and recovering well. The Broncos “will provide additional updates as appropriate” to the NFL.

“Aqib Talib suffered minor leg injury from a gunshot wound,” tweeted Mike Klis of 9News in Denver. “Broncos have been in touch with him and are working to find more information. Source close to Aqib Talib says it was ‘accidental’ gunshot wound.”

The incident couldn’t have come at a worse time for Talib, as he will miss the team’s trip to the White House Monday while being held in the hospital overnight. The Broncos are being honored for winning Super Bowl 50 over the Carolina Panthers.

The three-time Pro Bowler has had a number of off-field issues over the years. In 2009, Talib was arrested after allegedly assaulting a cab driver and missed the first game of the 2010 season with the Tampa Bay Buccaneers.

In 2011, Talib and his mother were both arrested near Dallas on felony assault with a deadly weapon charge after confronting his sister’s boyfriend; however, the charges were dropped.

In 2014, Talib was reported arrested in Dallas, but it turned out to be his brother, Yaqub Talib.

In 2015, Talib and Yaqub were questioned by the police over an assault at a Dallas nightclub. Talib’s car was towed and searched by the police; however, he was never charged.

Aqib needs to stay the hell away from Dallas.

And, of course, more questions keep popping up…

Talib originally told Dallas police he was in a park with friends when he suffered the gunshot wound, but was too drunk to remember what happened.

Rumors also spread over social media that the 30-year-old was at a club called V Live, where two other people were shot that night. And police were looking into that account.

But now the story has taken a different twist.

According to 9news.com in Denver, Talib has told people he accidentally shot himself.

The reports are that the bullet entered Talib’s right thigh and exited his right calf. And now investigators are trying to determine if the evidence provided supports the speculation of Talib shooting himself.

Talib was treated and released from the hospital Monday and was at the Broncos practice facility Wednesday.

There is no timetable for his return, but the 3-time Pro Bowler is expected to be ready for training camp.

If you remember, back in 2009, then-Giants wide receiver Plaxico Burress shot himself in the leg while out at a club and was sent to prison, serving 20 months. New York State gun laws are much more strict than Texas, though.

As of now, no charges have been filed against Talib or any other parties. And whether or not Talib will face discipline by the NFL also isn’t known at this time.

Those decisions won’t be determined until the police finish the investigation.