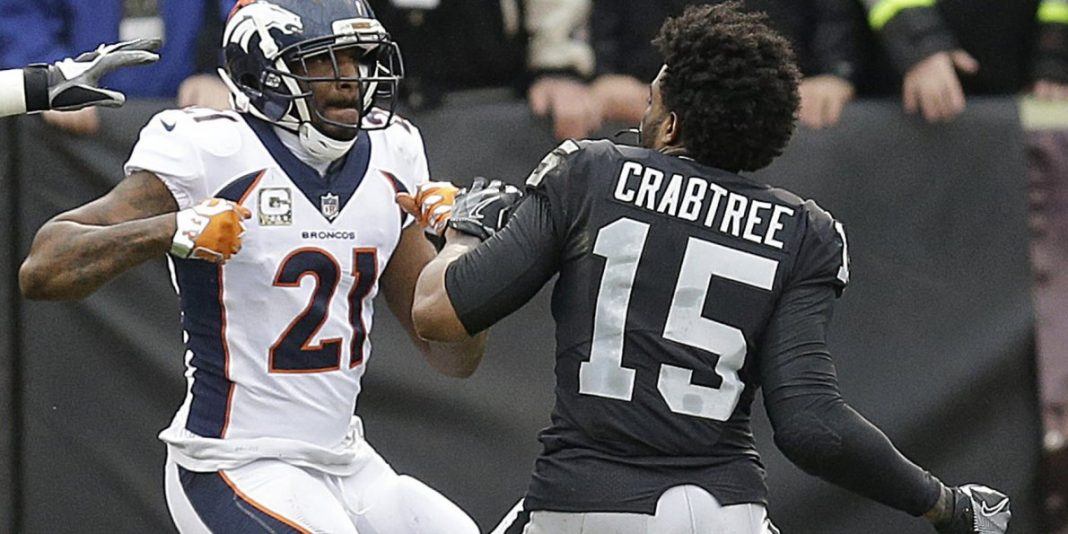 If you watched WWE Sunday Afternoon Smackdown this past weekend, you may have been disappointed that they decided to schedule the Denver Broncos matchup with division rival Oakland Raiders in the middle of the fight. Nonetheless, Broncos cornerback Aqib Talib and Raiders wide receiver Michael Crabtree gave it their best effort.

Talib and Crabtree have some history after Talib snatched Crabtree’s chain off his neck in a game last season. Apparently, there’s still some bad blood between the two of them. As Crabtree was blocking Talib, the Broncos Pro Bowler snatched his chain again, leading to Crabtree punching him, blocking him out of bounds, and leading to a fight that lasted a good minute or so.

After the game and during this past week, the two have been throwing shots at each other through various interviews.

The NFL didn’t seem to care, originally suspending both players for two games before reducing the time off to one game for each guy. The NFL also said that it believes Crabtree came out there with the intention of fighting Talib. That pissed Crabtree off even more.

“The league said it was premeditated on my part,” said Crabtree. “You know what premeditated is? When you say you’re going to do something, do it, and then laugh about it with the media after the game. Like he did last year. That’s all on him. I’m not trying to get revenge. I’m trying to get a catch in my 122nd straight game and help my team win a big game. I don’t want to get kicked out. I know what’s at stake for my team.”

Adam Schefter reported after the game that Crabtree had taped his chain to his body before the game to prevent Talib from snatching it off his neck. Crabtree vehemently denied it. If there was tape, then Crabtree certainly was planning ahead for a fight. That would also be pretty impressive if Talib still managed to get the chain off so quickly.

Either way, Crabtree isn’t happy that the general opinion (of the NFL at least) is turning against him, especially given that Talib is a well-known ass.

As for Talib, he has the Broncos organization backing him. John Elway agrees with the NFL that Crabtree started things. Of course, he doesn’t want his guys out there getting involved in fights and getting suspended, especially one of his top defensive players, but he feels like Talib did a good job of managing what could have been a significantly worse situation.

“From our point of view, we thought Crabtree was the aggressor,” said Elway. “He was the one that started it. Obviously it’s not something we want in the game, and I understand it from the league’s perspective that they don’t want it in the league, but I just thought that for Aqib and for our team, I thought [he] did a pretty good job of handling the situation that really could have gotten way out of control. Even though it was a little bit out of control, it could have been a lot worse with the way things went about and Crabtree’s mentality.”

I’m not sure that throwing punches in a full-on brawl is exactly a “good job,” but I’m sure Talib appreciates the support. He certainly didn’t receive the same outreach from head coach Vance Joseph who was much more upset about losing one of his best defensive players to what seems to be a personal beef.

“It obviously hurt us down the stretch,” said Joseph. “I told our guys, if we can defuse those things, we have to defuse them. We can’t fall into the trap of getting into a fight that ends up losing one of our best players. We can’t do it. It’s unacceptable; we can’t do it.”

The Broncos and Raiders first meeting went off without a hitch. The second didn’t go so well. But the two players will have plenty of time to calm down, as they certainly won’t be meeting again in the playoffs.