Home All News Movie News ‘Ant-Man and the Wasp’ delivers all the right punches for Paul Rudd,... 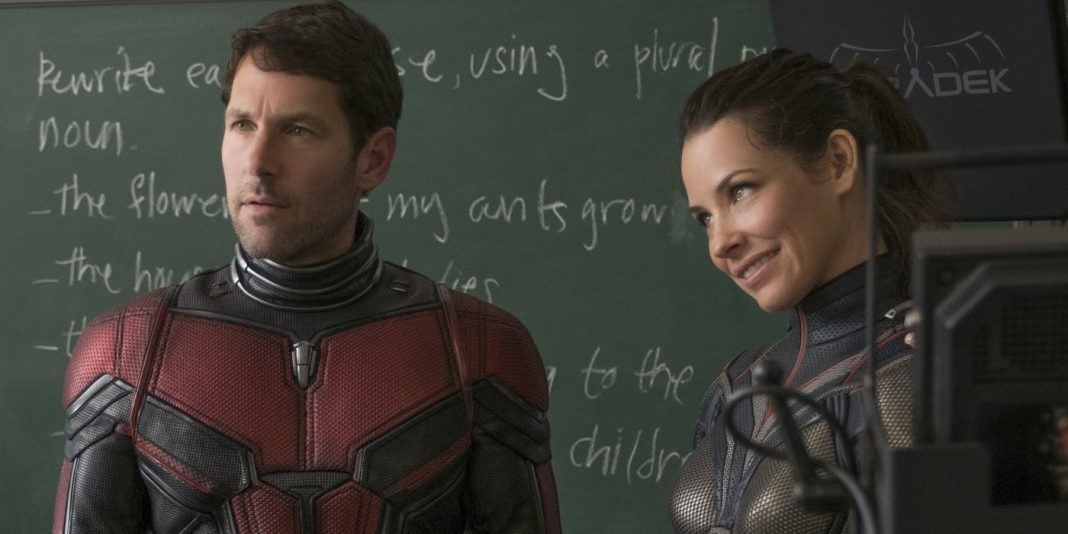 Paul Rudd returns to his favorite hilarious shrinking hero with “Ant-Man and the Wasp” bringing warmth and good humor along with Evangeline Lilly’s The Wasp in an elevated heartfelt action story. While it may lack the scale of the latest Marvel films, it’s a well-rounded sequel sure to please fans.

Not since Animal, against the advice of Dr. Bunsen Honeydew and Beaker, ingested Insta-Growth pills has a movie had as much fun with scale as “Ant-Man and The Wasp.”

Among the greatest threats to the shape-shifting heroes of the Marvel sequel are windshield wipers, salt shakers, and seagulls. This is surely the first movie to weaponize that most fearsome of terrors: a giant Hello Kitty Pez dispenser. In one of the film’s finest moments, a loud, careening chase culminates in a dramatic fall into the ocean sounded not with an explosive splash but with a tiny ripple and a “Plink!”

In both scale and ambition, “Ant-Man and The Wasp” is an altogether more modest affair, and it’s so much the better for it. Most Marvel movies strenuously insist on how much they matter — how much a carefully stitched together comic-book apparatus hangs in the balance — with only an occasional aside to acknowledge their inherent silliness. But slapstick is in the DNA of “Ant-Man and The Wasp.”

For some Marvel devotees, “Ant-Man and The Wasp” will be a clever enough diversion in between the more main-event releases. But it’s pretty much exactly what I’d want in a superhero movie: a funny cast, zippy action scenes and not an infinity stone in sight.

The Marvel product has, it should be noted, grown more dynamic and varied in recent years. But if you’re not going to reach the mythic heights of “Black Panther,” the light-hearted antics of “Ant-Man and The Wasp” are your next-best bet. As different as they are, the two films have one crucial thing in common: No outer space.

Just as “Black Panther” styled itself after a spy thriller, “Ant-Man” takes from the heist movie. The first installment in 2015 was a somewhat muddled franchise debut, thanks to a late director shuffle. Peyton Reed, who took over production on the first one, is back here, and he has carved out a real identity for Paul Rudd’s character, among the most self-contained in Marvel’s “cinematic universe.”

And more than its predecessor, “Ant-Man and The Wasp” has adopted the goofball charm of its leading man. Coming a few years after “Ant-Man,” Rudd’s Scott Lang is now under house arrest for his involvement in the Berlin showdown of “Captain America: Civil War.” When his 10-year-old daughter Cassie (Abby Ryder Fortson) isn’t around, he passes the time playing drums and learning magic tricks. With just days to go before Randall Park’s S.H.I.E.L.D. agent is to remove Lang’s monitoring device, he’s summoned by the brains behind their last adventure: Dr. Hank Pym (a sometimes in-the-way Michael Douglas) and Pym’s daughter Hope van Dyne (Evangeline Lilly), whose winged Ant-Man-like suit has earned her the Wasp moniker.

Pym believes his wife, Janet (Michelle Pfeiffer) has for the last 30 years been locked away in the “quantum realm,” a mind- and matter-bending subatomic limbo that, it turns out, has predictably done curiously little damage to the indestructible Pfeiffer. A Technicolor blur of floating blobs, the quantum realm looks like a lava lamp’s dream of heaven.

To send someone into the realm on a rescue mission, Pym and Van Dyne have built a sophisticated laboratory many stories high that, with a click of a remote, they can shrink down to carry-on size. Their plans bring them into contact with a black-market dealer (Walton Goggins) and an old academic colleague of Pym’s (Laurence Fishburne). It also attracts the interest of the film’s villain, Ghost (Hannah John-Kamen), whose tragic backstory has left her burning (figuratively) and blurry (literally) with anger for being robbed of a bodily existence.

The storyline is fine but the bulk of the pleasures of “Ant-Man and The Wasp” come from its digressions. And no one better breaks down the molecular structure of a Marvel movie than Michael Pena. Every time he takes the screen, he threatens to destabilize it with his chatterbox excitement. When Pena’s Luis (Lang’s friend and business partner at X-Con Security) is given a truth serum, you pray for the movie to just let him keep talking until the end credits roll. Just as good is Park, who steals his scenes with a quieter deadpan.

There are more gags, too. A malfunctioning Ant-Man suit turns Rudd enormous or embarrassingly child-sized. A Hot Wheels-riff on the “Bullitt” car chase tumbles down the hills of San Francisco. None of this is earth-shattering stuff, but that’s part of the fun of it. Here, for once, is a Marvel movie about saving one life, not a billion.

“Ant-Man and the Wasp,” a Walt Disney Studios release, is rated PG-13 by the Motion Picture Association of America for “some sci-fi action violence.” Running time: 118 minutes. Three stars out of four.