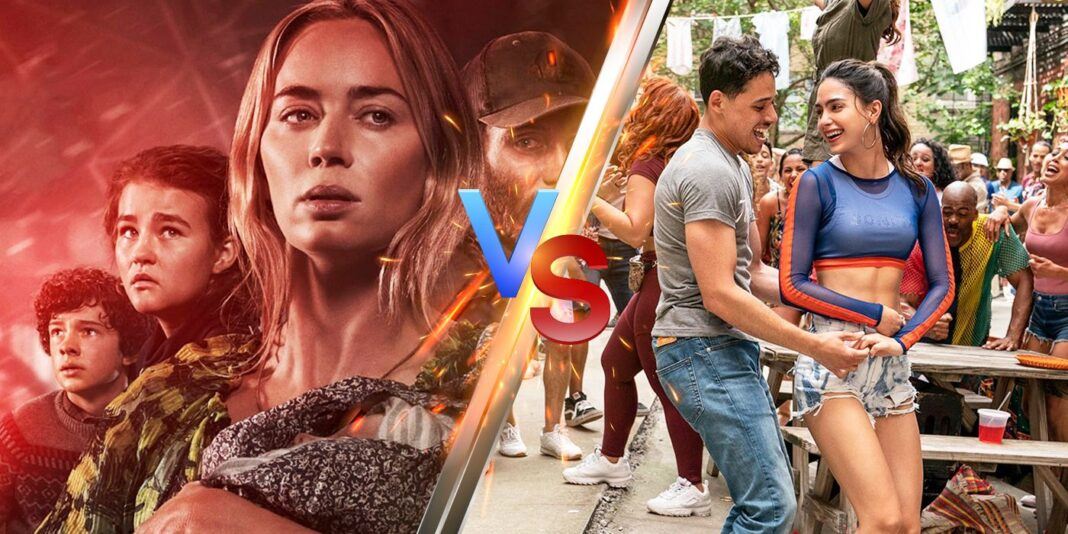 Lin-Manuel Miranda’s critically acclaimed adaptation of “In the Heights” didn’t muster the same enthusiasm in the theaters as it did on stage for Warner Bros. It still made it to the second spot on the box office charts though. “A Quiet Place II” pushed its way back to the top spot.

Hollywood was expecting a bigger splash in movie theaters this weekend, but the below-expectation debut of “In the Heights” dampened studio’s hopes of a swift or smooth recovery at the summer box office.

Jon M. Chu’s exuberant adaptation of Lin-Manuel Miranda’s Broadway musical opened with a modest $11.4 million, according to studio estimates Sunday. Forecasts had ranged from $15-$20 million. The release of “In the Heights” — a lavish song-and-dance musical accompanied by glowing reviews from critic s and considered a milestone movie for Latinos — was widely seen as a cultural event.

Based on the 2008 Broadway show, “In the Heights” is set during a sweltering summer in Manhattan’s lively neighborhood of Washington Heights and centers on a bodega owner named Usnavi (Anthony Ramos), who discovers that his mom-and-pop stop-and-shop has sold a winning lottery ticket. The ensemble cast also includes Melissa Barrera, Leslie Grace, Corey Hawkins and Olga Merediz. Quiara Alegría Hudes, who wrote the book of the musical, penned the screenplay. “In the Heights” carries a $55 million production budget.

On opening weekend, though, the Warner Bros. release narrowly missed the top spot. Instead, “A Quiet Place Part II” edged it with $11.7 million in its third weekend of release. (It’s close enough that the order could flip when final figures are released Monday.) On Friday, John Krasinski’s thriller — playing only in theaters — became the first film of the pandemic to reach $100 million domestically. Its cumulative total is $109 million.

After a string of good box office weekends, the opening of “In the Heights” was a reminder of the challenges of the marketplace. Most theaters are operating at reduced capacities to allow social distancing. Canada’s theaters are largely closed. And getting crowds to come out for a movie that was simultaneously streaming on HBO Max, as “In the Heights” was, adds another complication.

The lower than expected commercial reception for “In the Heights” is puzzling some because critics embraced the joyous film, showering it with some of the best reviews of the pandemic era. Moreover, Warner Bros. put substantial marketing heft behind the picture, and director Jon M. Chu and Miranda devoted a great deal of energy into promoting the movie, which compensated for the fact that its cast was comprised of mostly unknown stars and emerging actors.

Though it’s impossible to know the full impact, the film’s hybrid release on HBO Max likely affected its box office business. However, that’s not the sole reason that inaugural ticket sales for “In the Heights” were underwhelming. Recent Warner Bros. releases like “Godzilla vs. Kong,” “Mortal Kombat” and “The Conjuring: The Devil Made Me Do It” still pulled in solid receipts despite being offered simultaneously on streaming. But, as audiences slowly make their way back to theaters, box office charts have indicated that people are more inclined to show up for properties with higher brand recognition. Though the Tony Award-winning “In the Heights” isn’t an original property like “La La Land” or “The Greatest Showman,” it’s not as well-known as Miranda’s other musical sensation “Hamilton,” or even “Rent,” “Les Miserables” or “Cats.”

Starring a mostly fresh-face cast including Anthony Ramos, Melissa Barrera, Corey Hawkins and Leslie Grace, “In the Heights” didn’t have the star power of musicals such as “Mamma Mia!” to give it a boost. Miranda, who performed the lead on Broadway, ceded the part to Ramos. Miranda plays a minor role.

Instead, the film will depend on strong word of mouth (it received an “A” CinemaScore from audiences) to propel a long run in theaters. Its hopeful comparison would be a movie like 2017′s “The Greatest Showman,” which opened to $18.8 million but held firmly for months, ultimately grossing $174.3 million in the U.S. and Canada.

“We always thought that the movie has to do the heavy lifting,” said Jeff Goldstein, distribution chief for Warner Bros. “Even though it came in at a lighter level than we had expected, we’re proud of the movie that’s there and over time the hope is that we can get an audience to sample the movie and tell their friends to.”

Warner Bros., as is standard throughout the industry, didn’t release viewing data for “In the Heights” on HBO Max. The studio’s day-and-date approach, planned to last through the end of the year, has been much-debated. But previous Warner releases — particularly “Godzilla vs. Kong” (which managed a $32.2 million three-day opening in early April ) and last week’s No. 1 film, “The Conjuring: The Devil Made Me Do It” ( a $24 million debut ) — performed solidly while also being available in the home. The “Conjuring” sequel added $10 million in its second weekend.

HBO Max, Goldstein said, couldn’t be blamed for any disappointing results for “In the Heights.”

Box office prognosticators believe “In the Heights” can find an audience over the summer, similar to the box office sleeper hit that was the 2017 musical “The Greatest Showman.” The Fox movie debuted to a muted $8.8 million, but audiences fell in love with the soundtrack and Hugh Jackman’s charisma and returned to theaters over and over again. It tapped out with $174 million domestically and $438 million globally, a huge result. While “In the Heights” isn’t expected to reach those box office heights, it doesn’t have much competition on the horizon and could continue to play on the big screen.

“Musicals are crowd-pleasers,” says David A. Gross, who runs the movie consulting firm Franchise Entertainment Research. “When they connect, they’re capable of playing for weeks, generating strong multiples.” He adds that reviews and audience ratings are “outstanding.”

Last weekend, Disney’s “Cruella” may have also made a somewhat muted arrival in theaters because it opened at the same time on Disney+, for $30. In its second weekend, “Cruella” earned $6.7 million, bringing its total to $56 million.

“In the Heights” had originally been set to open in June of last year. The studio and filmmakers, believing its impact would be felt most powerfully in theaters, opted to wait for cinemas to reopen. Ahead of release, Warner put its marketing weight behind the film. Oprah Winfrey hosted a virtual block party for the film. On Wednesday, the film opened the Tribeca Festival with a yellow carpet premiere and screenings scattered throughout New York.

Regardless of box office, “In the Heights” is the rare bigger-budget spectacle film to feature a predominantly Latino cast. Though Latinos make up one of the largest groups of regular moviegoers (accounting for as much as 29% of tickets sold) their representation in Hollywood is still a fraction of that. According to audience surveys, about 40% of the opening-weekend audience for “In the Heights” was Hispanic.

The director Chu has previously helmed a breakthrough release for Asian Americans in 2018′s “Crazy Rich Asians,” which opened to $26.5 million over three days and then kept a multi-week lock on the box office. Recalling that — or perhaps sensing that “In the Heights” wasn’t going to debut like a blockbuster — Chu urged people to “vote with their wallets” by supporting the film.

“Even ‘Crazy Rich Asians’ you couldn’t really tell. It was only the second weekend when people started coming back and the third weekend when people who didn’t go to the movies started to come,” said Chu a week ahead of release. “Buying tickets to this thing — putting your money where your mouth is — was the democratic statement that no studio could make up.”

“The Conjuring: The Devil Made Me Do it,” currently in its second weekend in theaters, fell to No. 4 with $10 million from 3,237 venues. That brings its domestic tally to $43.7 million. Like Warner Bros.’ entire 2021 slate, the film is also playing on HBO Max for a month. Overseas, where HBO Max has yet to launch, the latest “Conjuring” entry has made $68 million for a worldwide haul of $11.8 million.

Rounding out the top five is Disney’s “Cruella.” The “101 Dalmatians” prequel, starring Emma Stone as the eventual puppy-snatching villain, nabbed another $6.7 million from 3,307 locations. After three weeks on the big screen, “Cruella” has pulled in $56 million in the U.S. and $73.3 million internationally. It’s currently available to Disney Plus subscribers for a $30 rental fee.

The domestic box office still faces many obstacles as it attempts to bounce back from COVID-19. Those speed bumps include hesitation among some consumers, the ongoing theater closures in Canada, capacity restrictions in U.S. venues that have reopened, and increased competition from Disney Plus, HBO Max and other streaming services. Still, there are several of would-be summer blockbusters on the horizon — “F9,” “Black Widow” and “Space Jam: A New Legacy,” to name a few — that should help to revitalize the movie theater industry.

“The recovery is going to come in waves,” says Gross. “It’s not going to be a straight line.”

Estimated ticket sales for Friday through Sunday at U.S. and Canadian theaters, according to Comscore. Box office number courtesy of Box Office Mojo.