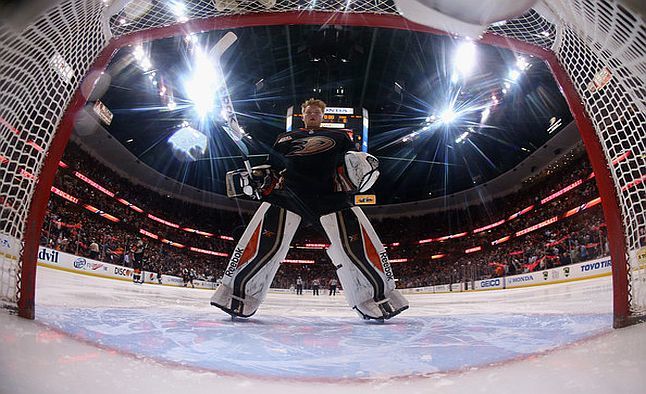 There are only seven teams still remaining in the playoffs for the 2015 Stanley Cup. Three of those teams will face elimination this weekend, one is already into the conference finals, and three others are on the verge of advancing. Here’s a look at the favorites for the Cup heading into the May 9th weekend.

Anaheim and Chicago, co-favorites at this point according to the odds above, are facing different scenarios.

Chicago are into the conference finals already following a fairly easy series against the Minnesota Wild. The Blackhawks completed a sweep on Thursday night and now await their opponent in the western conference finals.

Anaheim will probably be that opponent although they are not into the conference finals yet. However it seems fair to say that the Ducks have one foot (one skate?) in the door: Anaheim hold a 3-1 lead over Calgary and they promise to close out the Flames this upcoming weekend when the series resumes at the Honda Center. Few give Calgary a chance to win in Anaheim in game five, let alone win the series outright and then come back to win the Stanley Cup. Their odds of 66 to 1, long as they are, may overrate the Flames who are more like 150 to 1 longshots in my opinion.

The Lightning, like the Ducks, are also ahead in their series 3-1. They are close to clinching a spot in the eastern conference finals although the Montreal Canadiens, Tampa Bay’s opponent, are not without hope. Montreal have a home game on Saturday to try and get back into their series against the Lightning. With a win in game five, the Canadiens would put a lot of pressure on Tampa Bay in game six.

The Capitals and Rangers are not quite in a coin toss in the second round however the Rangers are not that far out of the series. A dominant road team, New York will have another chance to beat Washington at the Verizon Center this weekend. However currently the Caps hold a 3-2 series lead and hence Washington are considered stronger favorites than the Rangers at this point.

The best odds in the above list in terms of betting value probably belong to the Ducks. I think they are mega-favorites to win their current series and I like their chances against the Chicago Blackhawks. In fact, after playing – and winning – in Winnipeg and Calgary, two intense hockey cities, I think Anaheim will be more than ready for playing in Chicago. Furthermore, I think Anaheim are going to be major favorites in whatever game they play from home – and there should be a lot of them coming.

A lot of Cups have gone to the southern USA’s franchises during Gary Bettman’s tenure, including one already to Anaheim. The Ducks have a lineup that can compete with anyone and ‘luck’ appears on their side too. At any rate, the Ducks, at 5 to 2, are a better bet than any other team at this point in the Stanley Cup playoffs in my opinion.

Accordingly, they are my betting recommendation at this point in the playdowns.