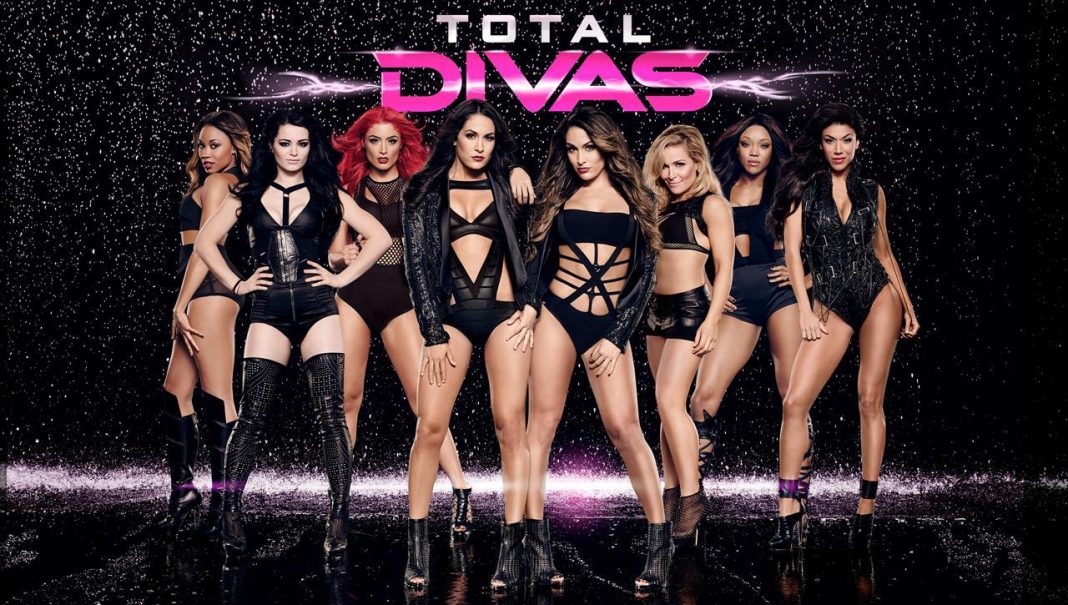 This week on Total Divas the show opened with Eva Marie and Naomi visiting Eva Marie’s hometown to see a fertility doctor. Eva Marie got married recently and her husband, Jonathan, wants children but she may not be able to sustain a pregnancy.

Nikki and Brie then met with a merchandiser to establish their own line of merchandise. Brie complained that Nikki was asking the merchandisers if they would ever go behind their sister’s back and try to sabotage their relationship, angering Brie and leading her to accuse Nikki of acting unprofessional.

Alicia Fox debuted as the newest member of the Total Divas cast and came clean that she is an honest person that is fun to be around. She also spoke of how she is getting more TV time on WWE’s flagship show, Monday Night RAW.

Eva Marie then confessed that not only does her new husband not know she can’t have a baby he doesn’t know she doesn’t want a child because she is scared to be pregnant. She also said that since she and her husband are just starting their careers that is another reason she is not ready to have a child. Eva Marie admitted that her relationship with Jonathan moved very fast and that is why she hasn’t told him she doesn’t want children.

Rosa Mendes then announced that she has 25,000 more Twitter followers than she had had the previous day. Alicia Fox and Rosa Mendes then discussed having a wrestling match together. Rosa said that she was worried that a wardrobe malfunction would be the only reason she would be gaining popularity with WWE fans.

Naomi told Brie that Naomi was going to kick Nikki’s ass in their match that night and Nikki said that she deserves to have her ass kicked. Nikki then told Brie she is a backstabbing b*tch. Brie confessed she thought she ruined her relationship with her sister.

Brie talked to John Cena backstage about getting Nikki to forgive her for interfering in Nikki’s relationship with John. He told Brie to give Nikki some space and time to let her anger die down over the whole situation.

Alicia Fox and Rosa Mendes then tried to practice staging a wardrobe malfunction in their hotel room in hopes of gaining more social media followers. Rosa Mendes then said that doing this was a bad idea because it might get them fired from the WWE. Alicia Fox also talked about the fact that the other WWE divas don’t seem to like her. She then confessed that for the first three years she was with the company she threw up prior to every match she wrestled because she was so nervous.

Jonathan and Eva Marie then discussed the fact that if she can’t have children they can adopt them. Eva Marie stressed again that Jonathan doesn’t know her real feelings about having children.

Brie then visited her mother and brother at home and talked about the trouble she is having with Nikki. Their mother then called Nikki to touch base with her and Nikki said she felt like she needed distance from the family. Her mother tried to reason with her to no avail. She defended the family by saying they just want what is best for Nikki.

Naomi and Eva Marie showed up at her fertility doctor’s office to find out if she is fertile or not. She was told her reproductive hormones and eggs are good, so she will be able to have children. Eva Marie confessed that this was a bittersweet revelation.

WWE officials called Rosa Mendes out on trying to plan a wardrobe malfunction. As a result he told her she could no longer be a part of the divas. Rosa Mendes swore that she didn’t make the wardrobe malfunction happen purposefully. She then said that Alicia Fox was the only one who knew about this and that Alicia had thrown her under the boss and betrayed her. Rosa then confronted Alicia about the incident and Alicia denied that she told anyone other than the other divas. Alicia claimed she has Rosa’s back 100% but Rosa didn’t seem to believe her.

Nikki and John began discussing the fact that she wasn’t going to go to a monthly “cousin” dinner that she always attends. Then John and Nikki told each other they were being poops. Nikki confessed that she loves her family but is having a hard time forgiving them.

Meanwhile at Nikki’s “cousin dinner,” she said the night wasn’t about Brie and she wasn’t going to let her ruin it. Brie tried to talk to Nikki at the dinner but she got ignored. She said that even though she has apologized to Nikki, Nikki is not accepting it and that Brie didn’t have time for the drama. Brie even confessed that she made a mistake, in hopes of making up with her sister.

Eva Marie then met with Jonathan to discuss their situation calmly. They came to the conclusion that even if she had previously confessed not wanting to have children, Jonathan still would have married her.

Next week on Total Divas viewers will see the continuation of each diva’s own personal drama.