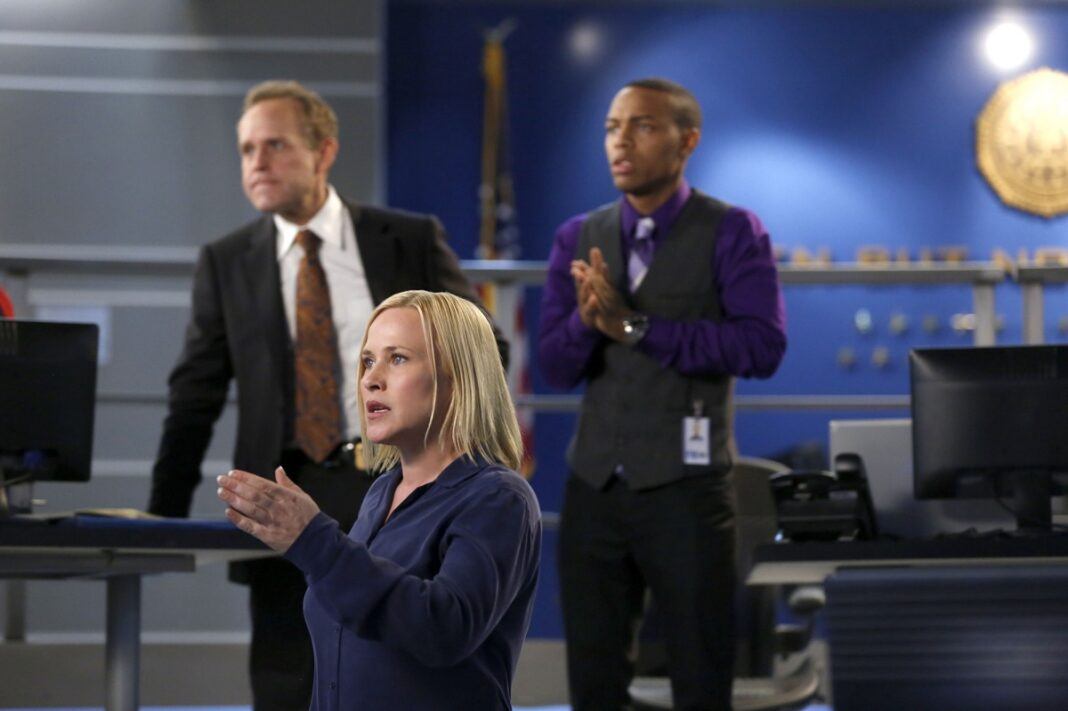 On this week’s episode of CSI: Cyber a movie theater usher found a bomb under a patron’s seat. The usher ran out of the theater and into the lobby with the bomb and warned people to get away before it exploded, which it then did.

Agents Mundo and Ryan then showed up to examine the area and Agent Ryan said that six people had been killed. The team had confiscated the cell phones of the people in the movie theater to determine whether or not anyone had captured anything happening on their phones. They were trying to determine who the target of the bomb was. There was a tablet attached to the bomb that showed, rather than a countdown to the bomb going off, a count up to it. They theorized that the target used the cell phones around them to detonate the bomb.

Agent Mundo and Nelson took the pieces of the detonated bomb to FBI headquarters in an attempt to begin piecing together this case. They were looking for the hard drive in the tablet that was on the bomb. They determined that all of the “kaboom texts” had malware in them in order to disable people’s phones.

At the D.C. Medical Examiner’s office Agent Mundo was checking the bodies of the bombing victims for possible clues in the case. The hard drive that had been in the tablet was recovered from the body of a young teenage boy. Two Congressional staffers were among the dead that were at the morgue.

The team at FBI Headquarters found a website with a video stating that if on the day the bomb went off people had left their cell phones at home the incident never would have happened. It also said that when the video reached a certain number of views another bomb would be detonated. The way the site was set up the video would automatically start playing when anyone viewed it. Nelson attempted to gain administrator access to the website.

Agent Ryan went to a Federal prison in D.C. to question Tobin, one of the prisoners. From him she received the information the FBI needed in order to gain access to the method the hacker used to cause the bombing incident. Nelson discovered that the malware used in the incident had malware of its own embedded.

In Paris and Italy, similar incidents happened and the FBI began to probe into these incidents to find out whether or not they were connected in anyway. Agent Ryan then took Nelson and went to see Tobin in prison once again. They went to get the encryption key from Tobin that they needed to get into the website in question. Tobin said if he could type the encryption key himself he would let Agent Ryan use it. She and Nelson were then able to get into the system and communicate with the rest of the team at FBI Headquarters, which allowed the team to pinpoint where in the malware program the command to detonate the bomb was located.

Agent Mundo found and confronted the man responsible for the malware program, who told Mundo that people were becoming too addicted to technology and that it was everywhere. The man had a bomb in his head hand when he was found and Agent Mundo shot and killed him when he went to detonate it. The team later realized that the man Mundo had killed was the only one who had key information that they needed in order to solve the case.

As Nelson and Agent Ryan went back to discussing the case with Tobin he began to have trouble breathing. After Tobin used his inhaler to get his breathing under control he told Ryan and Nelson that they could have let him die and Ryan said they weren’t going to let that happen because they still needed him

Back at FBI Headquarters Agent Ryan and the rest of the team pinpointed the event where the bomber in this case was very likely to strike again. They arrived at the event, which was a concert. The website that was going to trigger the next bomb detonation was getting enough visitors that the detonation was likely to happen that night, at this concert with hundreds of people in attendance. Like at the movie theater, almost everyone at the concert was using their cell phone to record the event.

The team showed up at the concert, went onstage and told the band to get the audience members out of the building immediately. Backstage, Agent Mundo found the bomb that was about to detonate, which looked just like the bomb that went off in the movie theater, complete with a tablet attached. Agent Mundo then left the building with the bomb and put it in his car. As Mundo fled the scene in his car Agent Ryan told him the bomb squad was going to come meet him and safely detonate the bomb but Mundo said the bomb squad wouldn’t get there in time. Though Mundo had one of the FBI team in his car, he told him to get out. Ryan told Mundo to drain the tablet’s battery, which would prevent the bomb from detonating. Mundo then pulled over and did what he was told.

Agent Ryan flashed back to two years previous when Tobin had been a part of the FBI team. Prior to joining the FBI he had been a black hat hacker before then. Ryan felt guilty that she brought him into the FBI only to have him go back to the wrong side of the law. She then realized that Tobin left his inhaler next to Nelson’s laptop to keep the team from discovering mistakes that Tobin made.