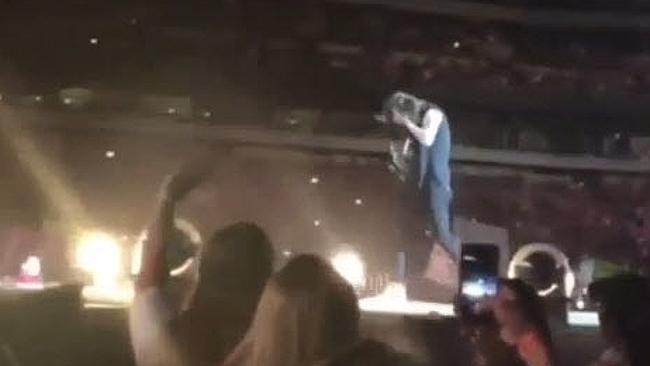 This week’s celebrity gossip kicks off with Cate Blanchett has just agreed to play the role of Lucille Ball in a biopic about the late actress’s life. The film will chronicle Ball’s life and the major roles that she played during her lifetime, including the Lucy-Desi Comedy hour and the classic I Love Lucy.

In sad news, Avril Lavigne has gone public with her breakup from Chad Kroeger. After two years of marriage the couple is going their separate ways, something Avril recently announced on her Instagram page. As celebrities almost always do, she claimed they will stay friends after the breakup.

At a recent One Direction concert, band member Harry Styles was injured by an empty soda can a fan threw onto the stage during the concert. The soda can hit him in the face as the band was performing the last song of the night, and he had to leave the stage early as a result. The guilty fan later took toTwitter to say that she hadn’t hurt Styles on purpose and that she started crying when she realized she had. She also said that a security guard at the concert threatened to bring a lawsuit against her if Styles suffered any serious injuries. The female fan issued an apology on her Twitter page.

During the launching of Rhianna’s new perfume she came under fire while appearing at a NYC Macy’s department store where anti-fur protestors showed up. Rhianna wore a fur coat to the perfume launch, causing hers as well as Macy’s security team to have to step in.

As Robert Pattinson was drinking in the Culloden Hotel bar in Ireland, a bridal party for a wedding held in the hotel surrounded him. He took photos with the members of the bridal party. Pattinson is currently in Ireland filming a movie.

In San Diego, Taylor Swift was performing in front of a sold out crowd when a male fan jumped on the stage. Swift’s security quickly tackled him to the stage floor, but in the process the fan cracked the ribs of one of the security guards. Because of this, he was arrested on charges of obstruction, felony and misdemeanor battery. Swift reportedly didn’t miss a beat of the song she was performing during the incident.

Female fans of Liam Hemsworth are green with envy after Miss Piggy posed in a series of photos with him, which were then posted on Instagram. The photos are to promote the upcoming ABC TV show, The Muppets, on which Hemsworth guest stars on an episode.

In happy news, Emmy Rossum is newly engaged to Sam Esmail. The couple has been together for two years and have not announced a wedding date as of yet.

Vampire Diaries actress Candice Accola has announced on Instagram that she and her husband are expecting a baby. The two are already raising her husband’s two kids from a previous marriage.

In sad news Wes Craven passed away last week after suffering from brain cancer. He left behind a wife, two children and two grandchildren. Craven was 76 years old at the time of his passing.

Proving how low class she is, Nicki Minaj recently won an MTV Video Music Award and during her acceptance speech she called host Miley Cyrus a witch who said negative things about Minaj to the press while speaking with the New York Times. Cyrus had reportedly told the paper that Minaj isn’t a polite or kind person. Way to prove her wrong. Other celebrities that made tasteful appearances at the MTV Video Music Awards included Justin Bieber, Taylor Swift and Pharrell Williams, among others.

Speaking of Justin Bieber, he had another encounter with the police over the weekend. Four squad cars pulled him over for driving 25mph more than the speed limit and having tinted car windows, which is illegal. Bieber got off with nothing more than a speeding ticket.

In other Justin Bieber news he recently appeared on The Tonight Show with Jimmy Fallon. He performed his latest song and even put his drumming skills up against the drummer from Questlove.

In a nod to her TV husband’s former TV wife, Modern Family star Sofia Vergara, who plays Ed O’Neill’s wife, dressed up as Peg Bundy, O’Neill’s wife on the long running Fox TV show Married With Children. She posted the pictures on her Instagram account.

Jennifer Aniston and Kate Hudson are currently filming a movie together. Hudson recently took a selfie with Aniston while on the set of the movie and posted the selfie on Instagram. In the caption of the pictures, Hudson encouraged fans to persuade Aniston to open an Instagram account for herself.

In a recent interview with the UK version of Glamour magazine Anne Hathaway confessed that Hollywood is fiercely competitive and there are fewer roles for females than there has been in the past.  Hathaway also said that she wasn’t complaining and that she had been able to land parts written for much older actresses.

Ellen Page and Julianne Moore recently made a movie together and Moore is talking about how Ellen coming out as a lesbian made her understand how painful the process of coming out is. The actresses appeared together on the cover of Out Magazine.

Hollywood’s A List recently celebrated its 15th anniversary. The anniversary party was attended by celebrities such as Mandy Moore and Vanessa Hudgens.

Since it would be tragic to end a week of celebrity gossip with no mention of the Kardashians, this week’s gossip wraps up with the debut of Kendall Jenner’s first commercial for Estee Lauder, a clip lasting 30 seconds.