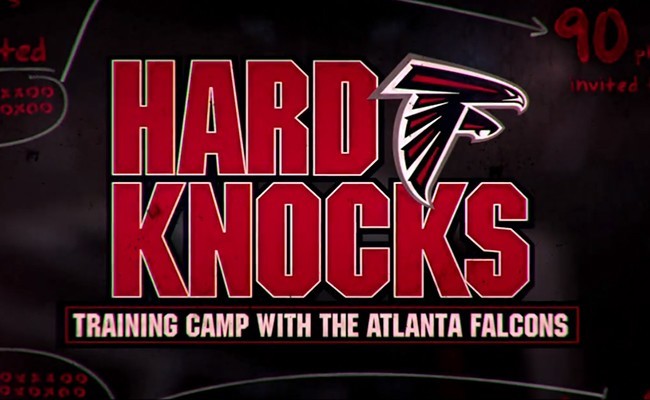 A welcome sight to the start of football season is HBO’s Hard Knocks series. This year the Atlanta Falcons are being covered over a five episode series. Who would have ever thought that training camp would be such an interesting event to film? But if all these other reality shows like Duck Dynasty and Basketball Wives can get viewers, it makes sense that HBO could produce a high quality ‘reality series’.

Episode one of the Falcons camp had a few highlights that are worthy of mentioning. If you missed the first one, you can grab it at hbogo.com (have to log in with your cable service provider).

One thing I learned was that Steven Jackson is a big time traveler and an artist to boot. That was pretty cool to find out. The fact that he got hurt early in camp was not cool at all. 2014 is not starting off any better for the feature back than 2013.

Another odd fact that came to light was that one of the Falcons is married to a reality TV “star”. Defensive end, Kroy Biermann, is married to Kim Zolciak. She is apparently one of the high drama women of ‘The Real Housewives of Atlanta‘. I would go on a rant about how terrible all those women seem to be, but Kroy seems like a legit hard-ass, so I will move on. Biermann got into a scuffle with rookie first round draftee, Jake Matthews, on the first day of camp. So the veteran is clearly “likes to fight guy”.

Moving on, rookie linebacker Tyler Starr is in desperate need of a haircut. If he can play like Clay Matthews III, then he can grow it back to look like the Packers’ star linebacker. Until he proves he is at that level, he needs to clean it up a bit. Starr does have a hot fiance. Smoking wives of NFL players is common of course and HBO does a great job of showcasing them.

An underrated receiver could end up getting a lot of screen time on Hard Knocks. Harry Douglas gets little attention league wide since he plays with Roddy White and Julio Jones. Douglas is a likable character and openly admitted to using women’s deodorant. To be more specific, ‘Secret’, which is “strong enough for a man, but made for a woman”. It will be nice to get to know the third wheel in the receiving corps.

The highlight of the series could be star receiver Roddy White. The veteran is funny as hell and seemingly has free reign to do and say whatever he wishes. He is a great trash talker that loves to get under the skin of defensive backs. Safety, William Moore is a big target of White. Moore does not seem to be great at quick comebacks, so that makes him an easy target.

The funniest part of last Tuesday’s episode was Dezmen Southward‘s impersonation of the Falcons’ special teams coordinator, Keith Armstrong. The rookie had the entire team cracking up with his dead on portrayal of Armstrong.

Some more quick notes from the show:

– Mike Smith had a helluva mustache back in the first year of Hard Knocks with the Ravens.
– Harry Douglas can’t even spell “scared”.
– Training camp must suck for players.
– When punching a teammate during practice, make sure you aim at the neck….not the helmet. Also be sure you are striking a rookie.
– Bryan Cox is a mean SOB. I hope it carries over to the team.