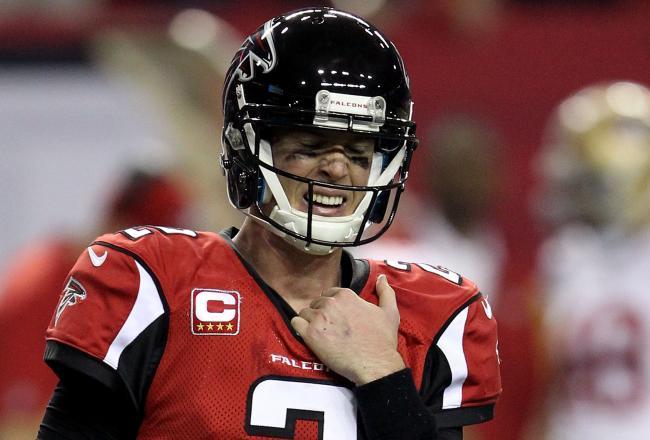 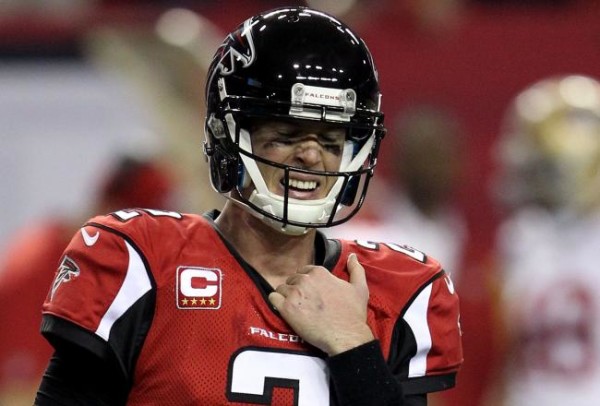 What? You think I have the answer to what’s wrong with Matt Ryan, Atlanta Falcon fan?

I don’t. I’m in search of clues myself. I want to know what happened to Matt Ryan in 2015.

Is he hurt and not talking about it? Doesn’t look that way.

Is Matt Ryan just in a bad slump, the worst of his career from the looks of it? Could be the guy’s human after all, no matter how composed he is in pressers and interviews.

Does Ryan just not have the weapons to rack up enough points to outlast opponents? We’ll get to that possibility.

Any of the choices above are plausible. And it’s likely that it’s a combination of all the above. If you take a look at Ryan’s stats, you don’t see a clear pattern of disaster, but throwing multiple interceptions in three games since week five is one number that sticks out like a sore thumb.

Even with the Falcons defense playing much better under Dan Quinn, they can’t be put in bad spots repeatedly and expect to hold off the opponent’s offense each time.

It’s hard to say Ryan is hurt. He looks fine. I’m not running beside him each morning on a treadmill so I can’t say for sure. In hi-def he looks the same physically as he did in the opener.

Kyle Shanahan is known for producing top notch running games. He’s not so adept at helping passers improve their game. See RGIII for reference. Clearly Shanahan needs to receive a great Christmas gift from Devonta Freeman as he has become a superstar under this offensive scheme. A lump of coal might be all Shanahan receives from the Ryan family if things continue to devolve, though.

Weapons? Who does Matt Ryan have that he can go to when he needs a first down? Freeman, of course, has proved worthy of touches and targets on any down or situation. Julio is Julio and can score on any play. Who else is worthy of the quarterback’s trust?

Not Roddy White. No matter how much I love the guy and what he’s meant to Atlanta, he just isn’t the player he used to be. He was force fed the ball nine times against the Colts. That yielded four catches for 24 yards, not exactly moving the needle when it comes to striking fear in a defense.

Leonard Hankerson has more drops than a mic in a rap battle. He showed flashes early in the year with a couple of long catches, but since has only been taking up space in the Falcons receiving corp.

Julio Jones is the main weapon in the passing game and the go to guy for Matt Ryan. That’s obvious. But he can’t do it all downfield, however. Freeman is more of a threat to catch a screen and take it 50 yards after the catch. The main concern past ten yards for defenses is Jones, and that is pretty damn easy to scheme for each week. Jones will rack up catches, but where the Falcons are lacking is in the scoring department.

The defense isn’t being rewarded for holding opposing offenses to just 21 points a game, which tops 22 other NFL defenses.

If that’s Matty Ice’s problem, not enough weapons, then I don’t see things improving heading into week 12. There’s no help coming. The Falcons offense is set.

And by the way, Cam Newton is doing pretty well with a crew of scabs catching his passes.

Tom Brady has always made more than due with some receivers that don’t even belong in the NFL.

And until recently, Aaron Rodgers had his Packers rolling even though his best receiver went down before game one.

Considering those examples, it’s clear that there will be no sympathy for Matt Ryan from Falcon fan. He’s fortunate to have one of the top two receivers in the League on his team. Other QBs would kill to have Julio lineup with their offense. As a bonus, Devonta Freeman has taken pressure off the passing game.

No matter what the real reason for Matt Ryan‘s struggles this year, fans only care about the next six weeks. If Ryan handles his business and plays like he is handsomely paid to play by Mr. Blank, we will all forget the past few weeks.

If Ryan can’t perform at a high level when his O-line is performing adequately, his defense is steady, and his run game is scoring lots of points while controlling the game flow, I have to wonder if he will ever be worth his 100 million dollar deal.

I hope he can prove his worth, starting next week against the Vikings. Searching for a replacement franchise QB is a lot harder than getting the current one back on track.