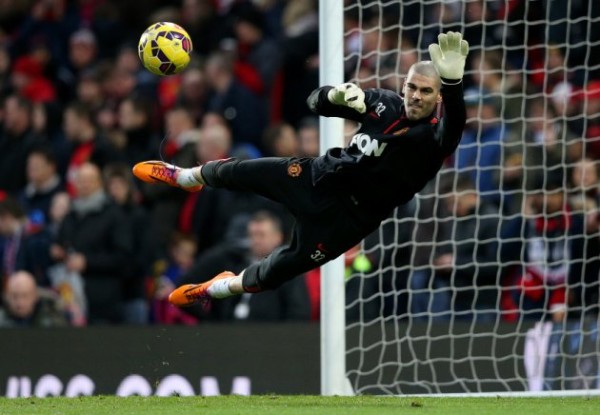 These are the numbers of Victor Valdes, the number 1 goalkeeper of all the all conquering Barcelona of the recent past.

The custodian is still only 33 years old, prime age for goalkeepers – for comparison: Gianluigi Buffon is 37 and is still the number 1 for the Italian national team and reigning Serie A champions Juventus, Iker Casillas, at 34, is manning the goal for the Spanish national team and Champions League contestants Porto, 33-year-old Petr Cech is still keeping forwards at bay for Arsenal and the Czech Republic team.

However, Valdes is languishing on the bench of Manchester United and not just that his fall out – for whatever reason – with Louis van Gaal has been such that the goalkeeper has not even been allowed a locker in the dressing room this campaign, he is not allowed by the authoritative Dutchman to train with the first team – the goalkeepers’ practice sessions are planned as such that it never coincides with those of his Red Devils’ team-mates.

It is indeed a very sorry state of affairs for a goalkeeper who was the undisputed number 1 for a team considered to be the best ever in the history of the game. And he was absolutely essential for the side to function the way they did.

So what went wrong?

Towards the end of the 2013/14 season Valdes suffered that most dreaded of injuries, an anterior cruciate ligament tear, and was ruled out for the rest of the season. Crucially, his contract with Barcelona was to run out at the end of the season and he had made it clear well in advance that he didn’t want to renew and instead look for a different club in the summer.

Valdes was reported to have had a pre-contract with Monaco and join the principality outfit in the summer of 2014 but his injury and financial troubles at the club gave them a chance to renege on the deal. As a result, Valdes was now without a club and still recovering from his injury.

Valdes got a hand from an old pal in Van Gaal, when the Manchester United boss offered him a chance to continue his rehabilitation at Old Traffod and later signed him on a contract that ended at the end of the 2015/16 season. It looked to be a great deal for both the parties involved.

As things turned, there was a falling out in the dressing room between Valdes and the headstrong manager. And now he is again left ruing what might have been.