Not even the best athletes in the world can out maneuver the tax man. Come to find out, ole Uncle Sam cometh for world class Olympic performers just like he goes after the average blue or white collar worker.

How much does the tax man want when it comes to American athletes who end up beating the world and getting a medal in the Olympic Games?

According to Americans for Tax Reform Uncle Sam comes out in fine shape when an American stands on the podium at The Games.

These are the maximum amounts, so many athletes will pay less than those listed. Yet for the competitors who don’t have sharp accountants, it would be easy to fall into the wrong tax bracket and have to give up nearly 40 percent of their cash prizes. 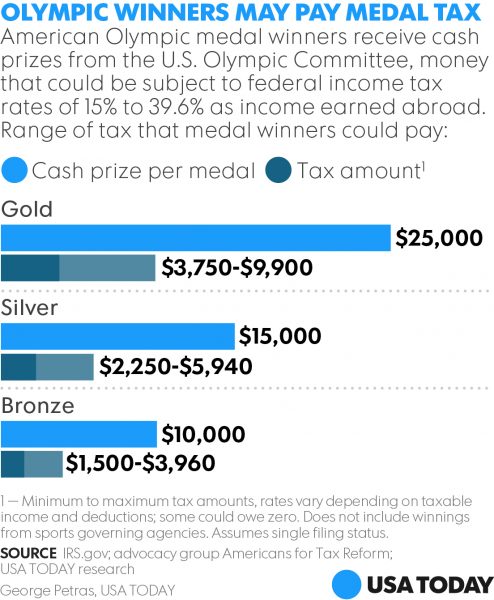 Memo to all Olympic athletes. Don’t trust Turbo Tax exclusively come April 15th, 2017. Hire the nerdiest looking accountant you can find within 100 miles to make sure you get all the right deductions!

A few politicians are trying to stop these taxes since it does have an unpatriotic feel to punish those who represent the USA on the biggest stage possible.

Yet, tax reform is slow, in case you haven’t noticed all the “Fair Tax” signs everywhere for the past decade. Seen any evidence of that effort making progress?

On the other hand, I’m sure there are hard working Americans out there who think Olympic athletes should have to pay their fair share. The guy sitting in a 4×4 cubicle for 65 hours a week probably isn’t feeling sorry for Michael Phelps right now. Phelps could owe around $55,000 for crushing his competitors in the Olympic pool.

I guarantee the lady working the register at Home Depot, answering the dumbest gardening questions ever, does not care about some beach volleyball players owing the government money. She rings up mulch eight hours a day and would gladly pay some extra taxes for a free trip to Rio to play volleyball beside the sea.

And of course, there are the able-bodied Americans who don’t work a lick and have had ample free time to watch the Olympics 12 hours a day. These moochers couldn’t care less about the tax man snatching some dough from our athletes. As long as those monthly government checks keep arriving on time, these free loaders don’t care if the IRS garnishes the wages of the entire USA Gymnastics Team.

The tax issue in America can get folks fired up, as you can tell from my previous rant. But at least our Olympic heroes can knock their tax bill down if they work in the right deductions. 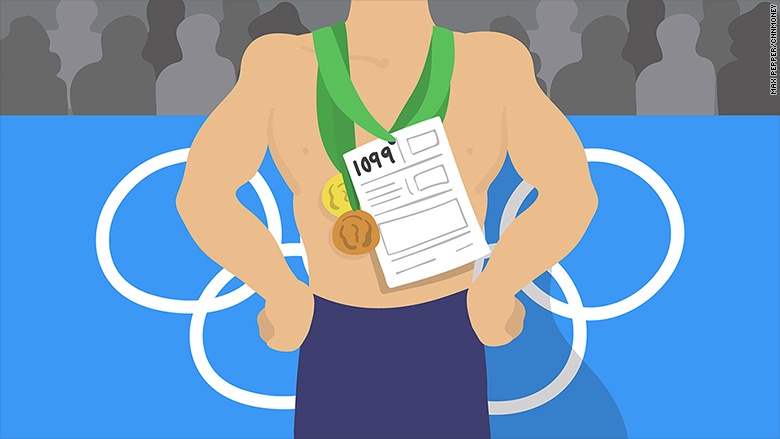 Here’re some deductions that American athletes should consider once they get that 1099 form in 2017. Keep in mind I am in no way qualified to give tax advice.

– Condoms seem to be an hourly need for Olympic athletes so they should save those Walgreen’s receipts.

– For those that like to use PEDs, I’m sure a slick accountant can fit those drugs in as “supplements.”

– Any personal care services should be deducted since it takes a lot to keep these athletes going. Everything from massages to renting hyperbaric chambers to aid recovery could be used to knock down the taxes on medals.

While the taxation on Americans trying to make their country proud, does suck, there’s still a bright side. Any athlete who gets to the Olympics has the chance to earn big stacks of money through endorsements.

That takes work to market one’s self, but the opportunity is there. Michael Phelps is an outlier. Not every athlete can just rake gold into their laps, event after event. But there are ways for others to make a name for themselves as they compete.

Fans watch the Olympics as much for the stories behind the athletes as they do to see the events themselves. A good story and an outgoing personality can grab the attention of the nation, and maybe a few extra sponsors.

Even so-called amateur athletes of the Olympics have to take advantage of all the financial opportunities that present themselves.

Every dollar counts when a big percentage of those dollars will go to Uncle Sam.