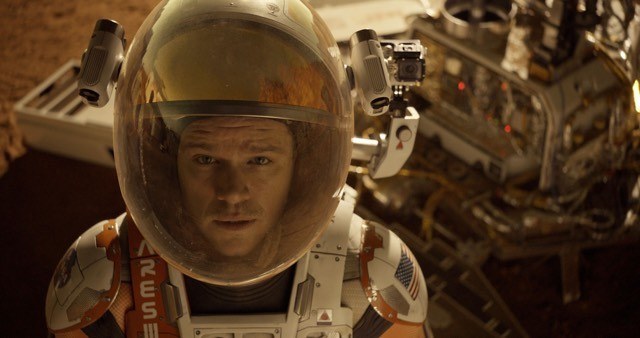 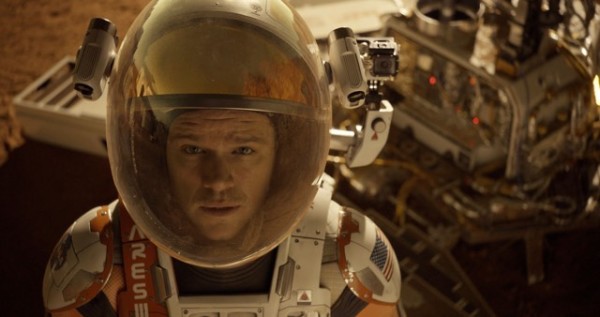 While he always seems to have something big on the go, A-list actor Matt Damon’s big hit in 2015 was undoubtedly The Martian.

In the film, audiences once again get to see how Matt fairs when abandoned out in space (recall: his role as the deceiving astronaut in 2014’s Interstellar). However, instead of trying to steal some screen time away from Matthew McConaughey and several other notable actors, The Martian puts Matt in the driver seat, as his character is the main focus for the majority of the movie. Although, he does once again star alongside Jessica Chastain (who was also featured in Interstellar), as well as a diverse bunch of actors, including Michael Pena, Kristen Wigg, Jeff Daniels and Kate Mara.

The sci-fi flick is based off of the book The Martian, which was written by author Andy Weir. Since the book was such a success, 20th Century Fox opted to produce a film version of the story and enlisted director Ridley Scott to help do so. In the past, Ridley has been a part of numerous well-known sci-fi movies, including 1979’s Alien, 1982’s Blade Runner and more recently, Prometheus (2012). Ridley, who is known for his attention to detail when it comes to visual effects, seemed to be the perfect fit for The Martian’s intergalactic backdrop.

The movie begins in 2035, where an NASA-enlisted crew of astronauts embarks on a mission to Mars. Unfortunately, when they are just about to complete their mission and head back home, they are hit by an unexpected and severe dust storm; During which, astronaut Mark Watney (Matt Damon) is hit by a piece of flying debris and separated from his fellow crewmembers.

Mark’s crew is eventually forced to leave without him, as they assume he must have been killed by the storm.

Meanwhile, Mark wakes up after the storm dissipates, deserted on Mars. Although he is injured, he is able to make it to the crew’s living quarters and operation base that is situated relatively nearby.

After letting himself process all that has happened for a bit, Mark realizes that he does not have an adequate supply of food, water and other essentials needed to keep him alive. Considering his only chance at rescue would be for a return crew to come (which would take ~4 years), Mark decides to put his own scientific and botanist abilities to the test, as he tries to “science the s***” out of what he does have. Thus, ideally keeping himself alive for long enough for help to get to the barren, red planet.

Ultimately, NASA is faced with a tough decision: risking numerous other lives in order to set up a rescue mission that only has a chance of succeeding or leaving Mark deserted on Mars. Faced with political, scientific and public pressure, NASA’s head executives find themselves between a rock and a hard place, as they try to determine the best plan of action given the complicated situation.

From the get-go, the film grabbed me as it right away dived into the core of the storyline. This was both surprising and refreshing, as I was basing a lot of my expectations on other recent space-based sci-fi flicks Gravity and Interstellar (which were both slow-moving at times). So while The Martian is undoubtedly a long-running movie, it did take a different approach to how it laid out the plot.

Some people are calling The Martian a sci-fi comedy, as it does incorporate a surprising amount of humor. However, it is much more focused on the sci-fi aspects, and while I appreciate most of the comedic moments, I personally wouldn’t consider putting a comedy tag on the film. Admittedly, I do think it added a much-needed additional element to set it apart from similar movies.

Overall, the movie was able to maintain a realistic feeling, even when Watney was making crazy contraptions to solve the never-ending problems that came his way. Despite being a lengthy movie, I found The Martian to be a lot smoother flowing than its counterparts, Gravity and Interstellar. I believe this is due to the film’s ability to seamlessly incorporate the diverse storylines that are weaved in and out of focus. I found that the movie did an impressive job of jumping from group to group, when it came to presenting how the events of the film were playing out on Mars, on Earth and in space.

Ultimately, I enjoyed that the movie didn’t focus too much on Mark’s distress. Although it was acknowledged, the film emphasized the more intellectually intriguing aspects of the story. Instead of seeing Matt Damon cry about how sad and alone he felt (although there was a bit of this), The Martian brings viewers into a story of survival, where the impossible must be done in order to make it another day.

The complex ideas that are tackled by Mark within the movie opened up my own mind to the possibilities of future space travel, as we become more and more innovative and determined to overcome the inevitable challenges that are associated with it.

Fortunately, we were given a gift this holiday from the almighty Netflix, as you will be able to stream The Martian on the video subscription service by the end of December.