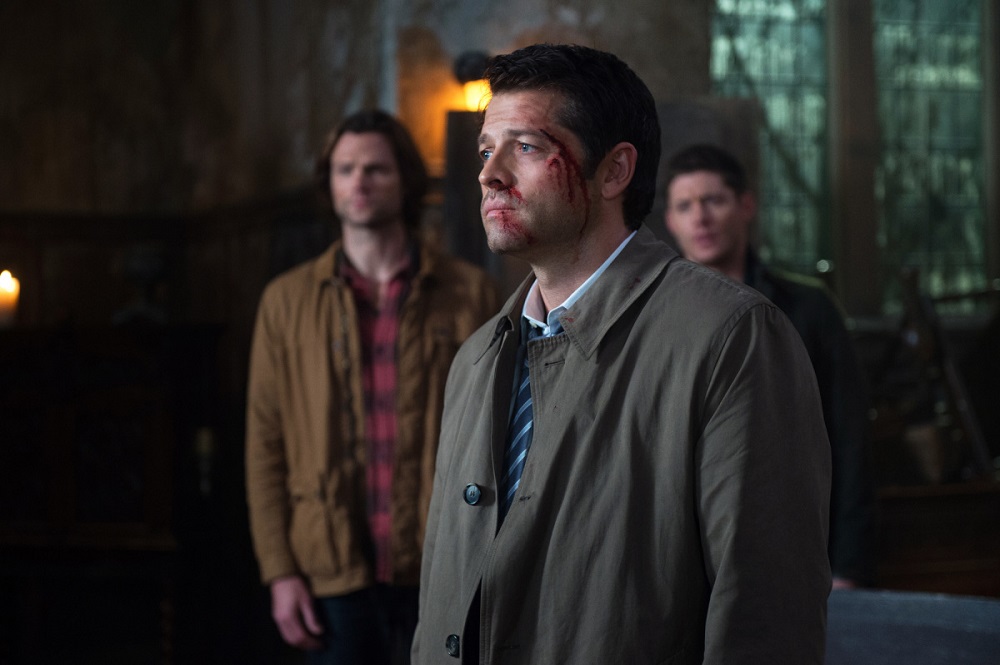 You can never have enough of angels in Supernatural, right? Many fans out there would like to put all the angels back in heaven, the demons back in hell and the boys and mom concentrating on the things that go bump in the night. But Cas and Crowley who are fan favorites won’t be shuttered with their brethren. And won’t it be fun if there was one episode with only the two of them? Anyway, how the show handles angels and demons will probably depend on the writing, and preferably, no large arcs about angels and demons for a while. The latest episode “Lily Sunder Has Some Regrets” is a well-crafted angel story with no ties to the Lucifer arc. The episode might as well be another monster story that happens to actively include Castiel.

This is a recap and a review of Season 12 episode 10, so spoiler alert for those who haven’t caught up yet. This episode begins with a woman playing the classic arcade game Rampage in a bar that’s about to close down, setting up a slightly creepy atmosphere like those monster episodes setting up the victim. The victim here, the woman, happens to be an angel named Benjamin. A bit weird but gender-bent angels happened before when Castiel temporarily took over Claire Novak, Raphael taking a female vessel and Hannah inhabited a male vessel. Benjamin gets attacked by an unknown assassin, who is also a woman sporting two angel blades and loses but not before alerting her group which includes Castiel. 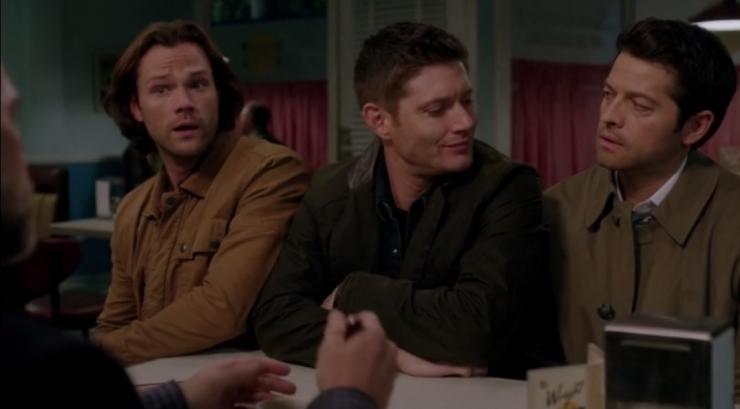 At the bunker, Castiel is once again at odds with Dean despite Cas saving the Winchesters by killing Billie. Still couldn’t get over an avatar of Death named Billie. Dean is worried sick of the cosmic consequences Billie warned them about breaking their deal in order to escape Site 94. Cas is still hoping for some appreciation and at the same time is mad at Dean for making another Earth-shattering-Winchester-life-exchange-deal, which this time he had to break. Cas gets alerted to Benjamin’s distress signal and has to investigate. Sam offers help, and Dean reluctantly tags along. Mary is out hunting a shapeshifter somewhere. While on their shaky road trip, Cas describes Benjamin as being clever and careful which gives them some idea that someone who can kill an angel like Benjamin is someone to watch out for. While investigating, they pick up one of the woman’s angel blades, and Castiel gets an idea of who they’re up against which also alerts the assassin to Castiel’s presence. The woman kisses a very old photograph of a girl before setting off. 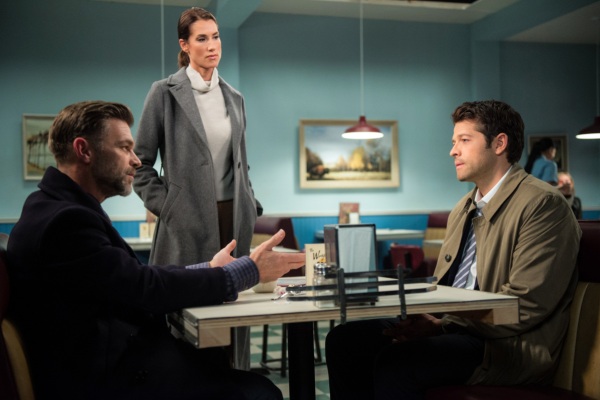 Castiel meets with his old group of angels. One is Isham who has an intense animosity against humans, and another is named Mirabel. Mirabel and Isham blames and insults Castiel for their broken wings which explains their de-powered status. The Winchesters barge in while the angels talk so Mirabel decides to go out as lookout resulting in her getting killed by the assassin. Isham leaves and discovers Mirabel’s corpse and gets attacked himself. They all discover and fight the assassin, but she escapes leaving Isham injured. Cas knows the assassin and explains what happened many years ago in 1901. We see a female Castiel, also wearing a coat along with Isham, Mirabel, Benjamin and a couple of others. Isham explains that they’re out to kill a Nephilim sired by their fellow angel Akobel and a woman who turns out to be the assassin named Lily Sunder. Isham was as racist to humans back then as he is in the present. Cas reads Akobel’s judgement then executes him, and Isham goes in to kill Lily’s Nephilim daughter. In the present, Isham explains that Lily Sunder is a professor who’s an expert in angels, knows Enochian lore and that he spared Lily out of mercy. Isham also said that Lily made a demonic pact for her life and powers.

The Winchesters volunteer to find Lily using her car plate that Sam memorized. Because Lily was killing angels for revenge, Sam and Dean wants to convince her to stop hunting Castiel instead of killing her. When they leave, Castiel heals Isham leaving him weakened. The boys find Lily, but Lily explains the story from her point of view. Lily’s obsession with angels led her to summon one, and she summoned Isham who was, unfortunately, hateful of humans but developed a fatal attraction to Lily. Lily left Isham and to protect herself summoned a benevolent angel named Akobel who she married. Lily also explained that May, her daughter was not a Nephilim as she had her before her marriage to Akobel. Isham’s sortie to Lily’s house was to kill Akobel and to personally hurt her by killing May unbeknownst to the company. Lily didn’t make a demonic pact but used Enochian magic to give her powers and extend her life but at the cost of her soul which Sam could relate to. The brothers try to confirm this with Cas, but Isham hid his phone. Dean leaves Sam to guard Lily and confirm their findings to a weakened Cas. 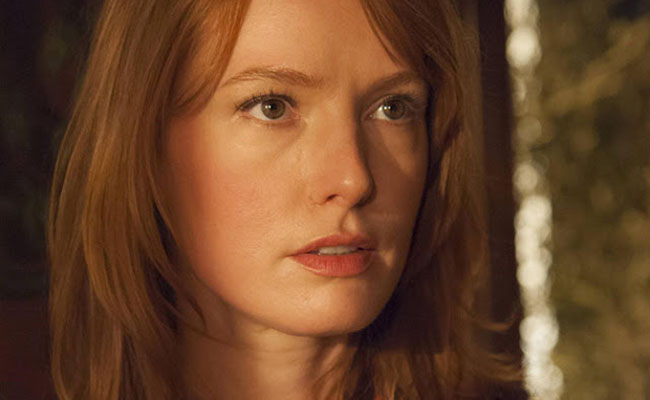 Isham attacks Cas and Dean after being confronted with the truth. Dean threatens Isham with an angel sigil, but the effects might be unpredictable to a hurt Cas. Sam and Lily arrive in time to save them. Lily tries to hold back Isham, but Cas manages to kill him from behind. The brothers try to convince Lily not to continue her vengeance against Castiel. Castiel also apologizes and offers himself to Lily but Lily leaves apparently satisfied with Isham’s death. The episode ends in the bunker with Dean and Cas settling their differences but with Cas still not regretful about his decision to kill Billie. They later discuss their next step in finding Lucifer’s Nephilim and hopefully find a better way of dealing with it.

Again, this is quite a good monster story with Lily, and later Isham standing in for the monsters. Despite being another angel story, this one was pretty dramatic, interesting and shows that angels, including Cas, have been working on the Earth even before the apocalypse. Lily Sunder is also an interesting character and might show up in a future angel-centric episode. With this show, if the brothers still have to deal with demons, they’ll have to deal with dick angels like Lucifer as well, with Lily helping out. More angel stories would be okay if they’re as well-made as this one.

Here’s a quick look at an upcoming scene from Thursday’s Supernatural 1211 Regarding Dean. I always thought everything was regarding Dean in some way.