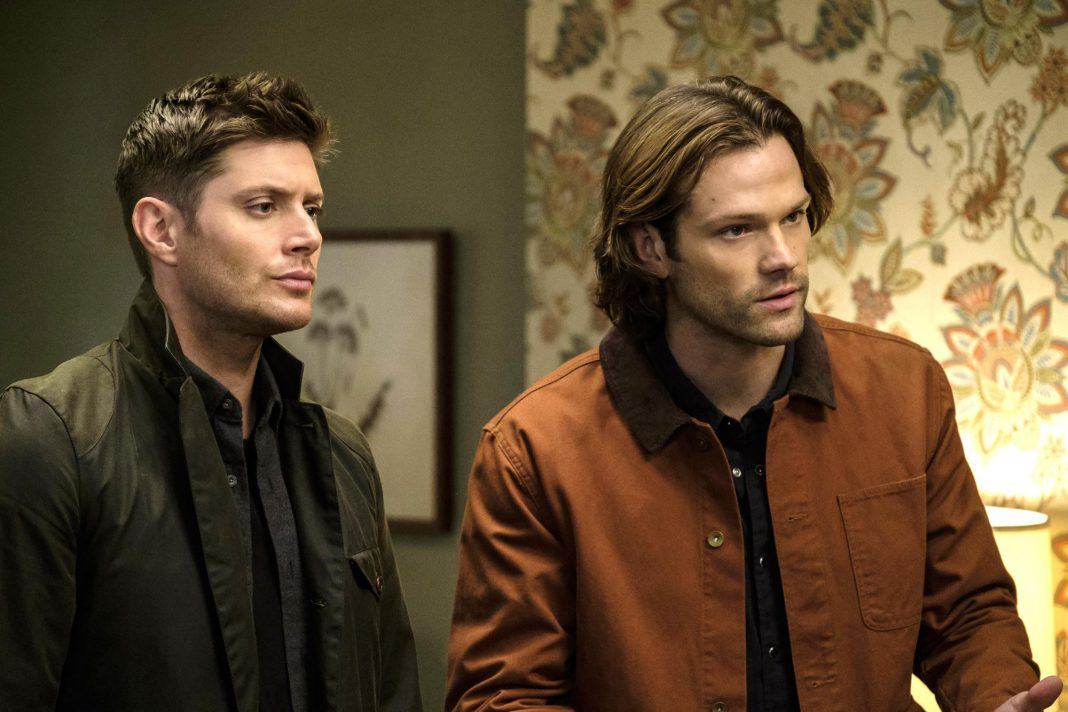 First off, I need to apologize for some past Supernatural statements in previous articles regarding Castiel’s whereabouts. Completely forgot that he went back to heaven to meet with Joshua. That’s the reason he hasn’t been answering calls and texts and why he was absent since their run-in with Ramiel. Seems Joshua the Gardener has his full attention. We’ll be re-capping the events of Episode 19, The Future. We probably don’t have to tell you readers to expect spoilers. If you’ve seen the episode, cool. Read on and let’s share perspectives.

Knowing that the baby will kill her anyway, Kelly lets herself go, refusing food, pills and even refusing to clean herself. Dagon insists that she take a bath but finds the opportunity to kill herself when she sees the mirror. She slits her wrists using a glass shard in the bathtub where she bleeds out, seemingly dead. Dagon finds her some time later in a corner very much alive as the child refuses to let her die. Kelly views this as a miracle that the child isn’t evil and will let her live after birth despite what Dagon says was merely an act of self-preservation.

For a lack of ideas on finding Kelly, Sam researches on Nephilim lore and concludes they have less than a month to find her. Cas suddenly shows up the bunker and knowing Dean; they end up in disagreement as to why Cas has been ignoring their calls. Cas goes to Dean’s room to try set things straight and ask Dean if they have a solution the moment they find Kelly. Dean says they’ll try but still clearly upset; he leaves Cas to grab a beer. The brothers continue wracking their brains into trying to find a solution to the Nephilim problem without having to kill the child and the mother. It suddenly occurs to Sam that they can somehow extract the grace from the child, turning it into a normal human. They remain oblivious to the fact that the mother will not survive childbirth. Dean excitedly goes back to Cas but finds that he’s gone again.

Cas meets again with the angel Kelvin, and it turns out his purpose for going to the bunker was to get the Colt which they will use to kill Dagon, Kelly and her baby. Just another act of betrayal for Castiel. Usually, we’d be in shock, but after going through some sites, many fans felt the same way as I did, ‘not again.’ Castiel always seems to get himself in situations where he’s at odds with his adoptive family. Hey, what’s family without those odds, eh? His motive? Foremost, to keep the Winchesters from having to kill an innocent foremost, and to keep the Winchesters safe from Dagon while at the same time conforming to Joshua’s plan. There are two bullets in the Colt. One is for Dagon and the other for Kelly. They attack Dagon and fail, but Cas does get out with Kelly but again has to suffer the loss of his comrades. Dagon is left to torture Kelvin. One bullet was wasted missing Dagon, but Cas doesn’t use the other to shoot his mark. Guess the show is playing on Castiel’s inherent goodness or he’s just stalling on shooting Kelly for as long as possible. While escaping in Castiel’s old pickup which we’re guessing is still the one he stole from the beginning of the season (missing his pimp mobile).

Meanwhile, Lucifer is amusedly enraged that Castiel managed to get away with Kelly and is obviously on his way to the Winchesters. We see that Lucifer still has all his chops despite him being chained and caged in his vessel. Basically, it was his old status quo, except that Crowley is in control of the cage. He still has the ability to control his subjects even powerful ones like Dagon. The only thing keeping Crowley from getting killed is probably the title of King of Hell plus maybe a physical proof of that title that he’s keeping. In the world of Supernatural, despite the Leviathans and The Darkness, Lucifer is still evil incarnate.

Castiel communicates with Joshua on what needs to be done, and it’s decided for Castiel to take Kelly through the Sandbox. She and her baby will be disintegrated, but their souls will be free to enter heaven. The truck breaks down completely, and the two have to bunk in a room. Kelly tries to enter the bathroom and makes an excuse to get water. Some slight humor here as Cas will not be fooled twice, well, on something this simple. Castiel’s history has been one bad partnership after another with the next one guilt-tripping him over the previous. First with heaven itself, with Crowley, with Metatron, then with Lucifer. This is where many fans agree that this plot is already overused. The moment Cas met with Kelvin, he’s getting into trouble again.  But yes, we know where Castiel is going with this. He loves the human race. He loves the Winchesters. He wants a win for them.

At the motel, Kelly tells him what she told Dagon, but Castiel shares Dagon’s opinion. The baby kicked, and Kelly has Castiel touch her belly. Castiel then gets a vision of the future, then Sam and Dean show up. Dean’s anger at Cas gets put on hold when they see he has Kelly. The boys explain to Cas their plan, but Kelly doesn’t approve as it would take away what makes her baby special. Again, she no longer believes the baby will kill her and that she’s now part of some special plan. Cas and Kelly get into the Impala, but as the boys discuss their next step, Kelly drives the Impala away from the scene. Castiel doesn’t stop her then Kelly tells him that he will be the baby’s guardian angel based on the vision. While fixing Castiel’s truck, which is strange as they could have boosted something else in the lot, the boys discuss Castiel’s motives. At least Dean now has an understanding of Castiel’s low self-esteem based on what we pointed out above. 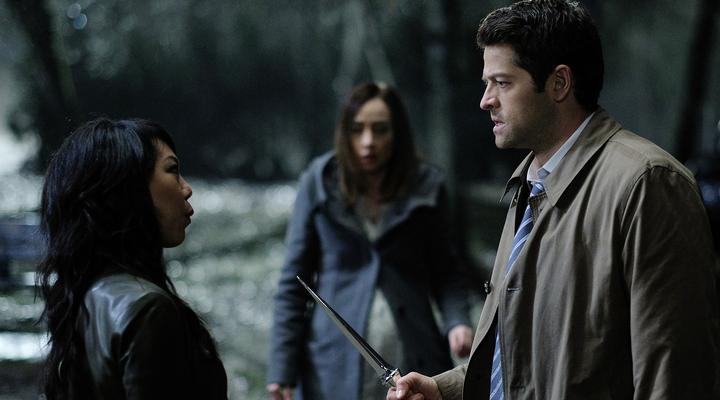 Castiel and Kelly arrive at the sandbox to be greeted by Joshua. But suddenly Joshua disintegrates, killed by a waiting Dagon. It was a very anticlimactic end for Joshua, the Gardener of Eden and current leader of heaven. He’s was even in a new vessel which would make us wonder if this was the same Joshua. Dagon then beats up Castiel then the Winchesters arrive before she can kill him. She beats up Dean as well, takes the Colt and melts it. So much for the bloody Colt. The end of its long history. Maybe something new will show up. Castiel gets up and approaches Kelly as Dagon closes in. Kelly holds his hand then power passes from Kelly to Cas. Castiel is healed and manages to kill Dagon. Castiel not only gets his powers back but becomes something more powerful. He heals Dean and decides to leave with Kelly and becomes the baby’s guardian. The boys won’t let him leave, but he puts them to sleep.

As pointed out before, Castiel again enters an uncertain partnership. Despite being Lucifer’s progeny, it doesn’t mean the Nephilim will ally itself with him instantly. It’s said that even undeveloped babies feel their mother’s love while within the womb which makes him a different being altogether. Kelly might even survive the birthing, but for certain, we know it’s powerful to elevate Cas to the level similar to an archangel. Strangely though, he still chose to take the broken down truck instead of teleporting Kelly away from the scene.

This episode again takes us to familiar territory where Castiel allies himself with someone else on some misguided mission. In this case, however, he’s allied with a being we’re not sure can already think for itself. Castiel’s character has been floundering around for a purpose these past seasons. He just keeps teaming up with the wrong people, and hopefully, this will be the last. Not an expert writer here but like the showrunners, we’d all like to keep Castiel, and many agree that him going on his own then teaming with someone else playing on his naiveté has already been done.  Well, kind of like the constant cycle of the brothers keeping some secret from each other. We’re pretty sure the writers can cook up something useful for Castiel to do. Perhaps for the meantime, keep him around, underpowered enough to keep us caring while the monsters of the week get to throw the team around. He can act as the party’s healer like in RPGs. Maybe the writers can look into those ones where the healers have good roles and backstories. Anyway, as Dean said, the three of them work better together. Perhaps with Cas, as he was before this episode, a low-powered angel with broken wings and maybe in the future, a Cas and Crowley spinoff if the franchise wants to keep Crowley on board as well. Speaking of onboard, it’s a shame about the Colt, and yes, Joshua too.

If you missed the EW shoot with the Supernatural crew, that’s just above for you enjoyment.