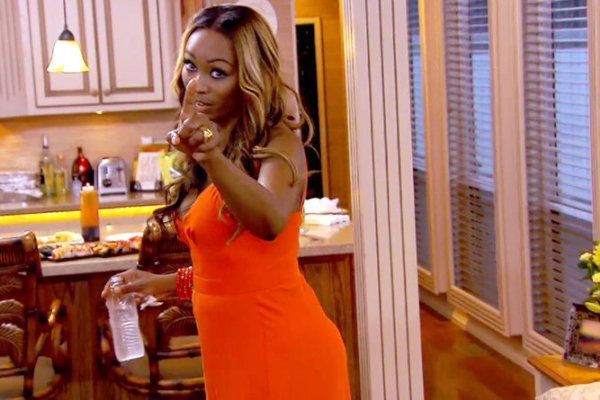 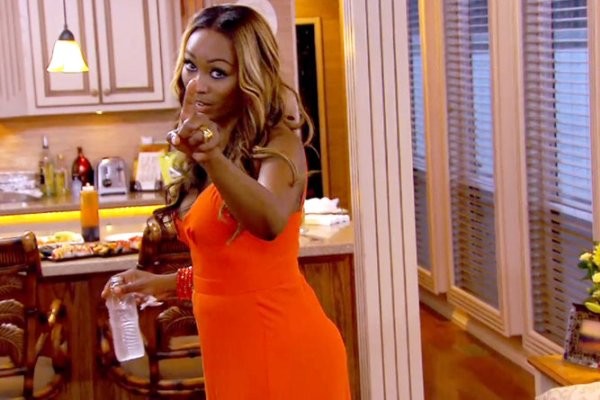 “The Real Housewives of Atlanta” continues to bring the drama and this week, and it came in all forms.

Picking up right where they left off last week, we see what goes down between Porsha Williams and Cynthia Bailey, and it ain’t pretty. The infamous kick felt all around the world sends Porsha over the top, and a guy literally has to lay on top of her to stop her from kicking the former model’s ass.

As the chaos ensues, everyone rushes to see what’s going on and of course, Kenya takes Cynthia’s side because, “she cannot control herself, you can’t have a simple argument.” She takes her friend to the bottom of the boat while Shamea and Porsha are escorted off and taken back to shore. Cynthia doesn’t want to speak to anyone but Peter. She calls her husband and begs him to come home, and he does.

The next day, as everyone tries to make sense of what happened, each lady has her own version of what happened on the boat. Even Phaedra has an opinion, and she wasn’t even there. Kenya blames Porsha; Kandi Burruss thinks it’s all stupid, and Kim is just all kinds of confused. But none of their thoughts really matter because they weren’t the ones in the fight.

So let’s talk about the ones that do. Porsha shares with her mother the wounds she received from the altercation on her stomach and express how through she is with Cynthia. While she is willing to have an open dialogue about the situation, she doesn’t believe that they can be friends. Because she knows how it feels to have marital problems, she was doing her best to be there for her, but when Cynthia popped off on her, it was pretty much the end of whatever relationship they had.

In the meanwhile, Peter is back in Atlanta and right by his wife’s side. It’s good to see him come through for her. Cynthia tells him her side of the story and he says “it’s never going to feel good when you hurt somebody” to which she says, “I didn’t say I hurt her, I didn’t even know I hurt her, I hope I didn’t hurt her you, think I hurt her?” Peter keeps it real with his wife and tells her, “you kick somebody you hurt them” and she just doesn’t want to hear it. It is clear that Cynthia feels bad about what happened, and her denial and defensiveness shows it. She knows that she hasn’t been herself and realizes that she overreacted. Peter tells her straight up that all this stuff she is feeling is not about Porsha so,“When you see her later apologize to her.” He wants to talk about where she is, and they do.

Kenya Moore, who seems to be the thrower of parties this season, in an attempt to bring the ladies together once again, gives a brunch to “reunite and maybe get this whole thing back on track.” And because she has the answers, she meets with Porsha first to make sure they are on the same page.

Now, remember that Porsha and Kenya have had their issues in the past which is why she feels she is the perfect person to help rectify the situation but their history is also the reason Porsha has her up her guard. The day of the brunch, they have a conversation about what happened on the boat before the other ladies arrive and Porsha tells her that she didn’t like the way Kenya treated Shamea. Kenya feels like she’s blaming her for what happened and they have a tense moment in which Porsha tells her, “I don’t need you to speak to me like that because for one I don’t trust you.” Kenya tells her “that’s unnecessary” but I beg to differ Ms. Moore. A person can only deal with another from the standpoint of their experiences with them, and that’s what Porsha is doing. Nonetheless, Kenya is the bigger person, de-escalates the situation, and they move on.

After they iron out their issues, the other ladies show up, and there is an expectation in the air and not the good kind. Once everyone is seated, Kenya makes an announcement about the purpose of the brunch and gives Porsha and Cynthia an opportunity to speak to each other in private.

During that conversation, for the first time in a long time on the show, people take responsibility. They both have an open heart about hearing the other out on the situation. While they talk it out, back at the table, Kandi tells Kenya about herself.  “Sometimes Kenya I feel like you’ve always been good at pointing out what the other person has done, but you’re not good at pointing out what you do yourself.” Kenya takes offense to this and says, “I’m glad she has such an advocate over here because I would really like for you to advocate for me when you think I’m in the right, and you never do that.” They have a back and forth, but Kenya quickly ends it because, “Fighting with a pregnant woman is just not good Karma.”

In the end, Cynthia and Porsha make up and walk back into the branch to the applause of the rest of the cast. They move forward with the expectation to be cool again.

In the words of Kim Fields, “That’s how you get your grown woman on.”