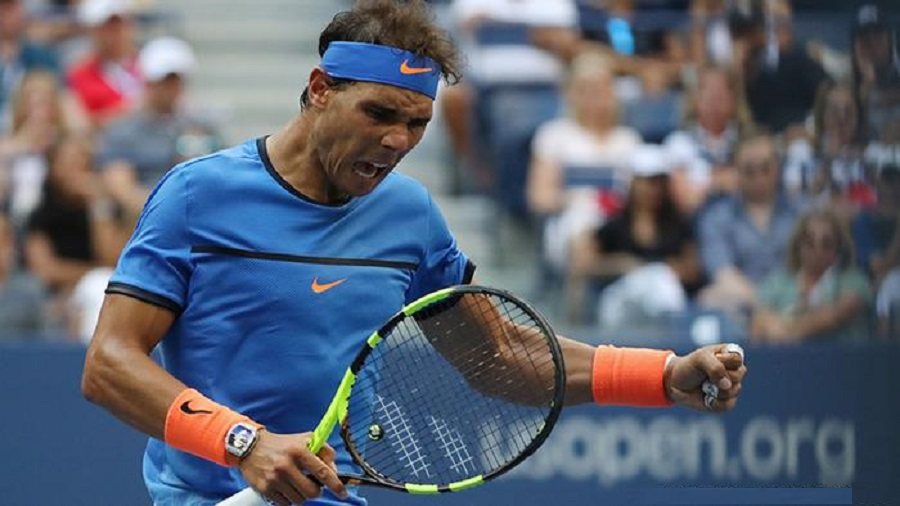 Rafael Nadal made sure that he wasn’t going to be taken down on Sunday at the 2016 US Open, but Louis Pouille proved that he was on a mission to do exactly that. Facing a much younger, much-less-accomplished opponent, Nadal twice erased a set deficit. Then he staved off a trio of match points.

And then, more than 4 hours into the toughest test he’s put his left wrist through since returning from injury, Nadal faltered. He missed a short forehand, pushing it into the net. Nadal knew what he’d done and covered his eyes with both hands. One point later, the match was over.

“There were things I could do better. Had the right attitude. I (fought) right up to the last ball,” said the No. 4-seeded Nadal, a two-time champion at Flushing Meadows. “But I need something else. I need something more that was not there today.”

He breezed through his opening three matches at the hard-court tournament, dropping only 20 games. But Pouille, a 22-year-old with flashy strokes, presented a much greater challenge in the fourth round, pushing Nadal to the limit through entertaining, tense – and intense – exchanges. 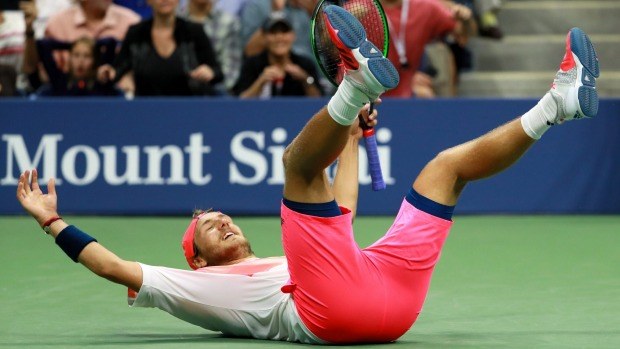 “Every point was great,” Pouille said.

This was Pouille’s third career victory in a five-setter; all have come in his past three matches.

Since losing in last year’s French Open quarterfinals, Nadal has failed to make it beyond the fourth round at a major. And after winning at least one Grand Slam title each year for a decade, he’s now gone two full seasons without one.

In 2016, he lost in the first round of the Australian Open. Then he pulled out of the French Open before his third-round match because of a torn tendon sheath in his left wrist, an injury that forced him to withdraw from Wimbledon altogether and miss about 2 1/2 months in all.

After finally pulling even with Pouille by capturing the fourth set, Nadal broke to open the fifth, then went ahead 4-2. But Pouille broke to 4-all.

“Sometimes,” Pouille said of the raucous crowd at Arthur Ashe Stadium, “I couldn’t even hear myself when I was saying, ‘Allez! Allez! Allez!'”

Soon enough, they were in the tiebreaker, with Pouille holding his first three match points at 6-3.

Nadal – who came to the net far more often than usual – wouldn’t concede yet, though, and one forehand winner by him plus two tight forehands by Pouille evened the score. Anyone’s match to win.

Pouille had never been to a Grand Slam quarterfinal until Wimbledon a couple of months ago, but it was Nadal who blinked at 6-6. Pouille played conservatively, hitting short shots and making sure they landed in. On one such seemingly easy ball to exploit, Nadal moved forward and whipped that big forehand of his, only to see his reply smack the net.

“I played the right point. I put (myself) in a position to have the winner, and I had the mistake. That’s it,” the 30-year-old Nadal said. “You cannot go crazy thinking about these kind of things, no?”

That error made it 7-6 in the tiebreaker, Pouille’s fourth match point, and he would not let this one slip away. On a 16-stroke exchange, Pouille delivered a gutsy forehand winner to a corner.

He dropped on his back, his tongue sticking out. As he rose with eyes wide open – and tongue still wagging – the last man from France to win any Grand Slam singles title, 1983 French Open champion Yannick Noah, whose son Joakim recently joined the New York Knicks, spread around high-fives in the stands.

Pouille was joined in the quarterfinals by a pair of countrymen, No. 9 Jo-Wilfried Tsonga and No. 10 Gael Monfils, giving France three men’s quarterfinalists at the American Grand Slam tournament for the first time in 89 years. Tsonga, a 6-3, 6-3, 6-7 (7), 6-2 winner over the last U.S. man in the field, No. 26 Jack Sock, now plays No. 1 Novak Djokovic. The defending champion had his right elbow treated by a trainer early in the third set of his 6-2, 6-1, 6-4 victory over Kyle Edmund of Britain.

Pouille will face Monfils, a 6-3, 6-2, 6-3 winner over 2006 Australian Open runner-up Marcos Baghdatis, who received a warning for unsportsmanlike conduct for using his cellphone during a second-set changeover. Monfils is quite a character himself: In the middle of one point, he pretended to lean over to tie a shoelace before quickly resuming play.

In the women’s quarterfinals, it’ll be No. 2 Angelique Kerber vs. 2015 runner-up Roberta Vinci, and two-time finalist Caroline Wozniacki vs. 48th-ranked Anastasija Sevastova of Latvia.