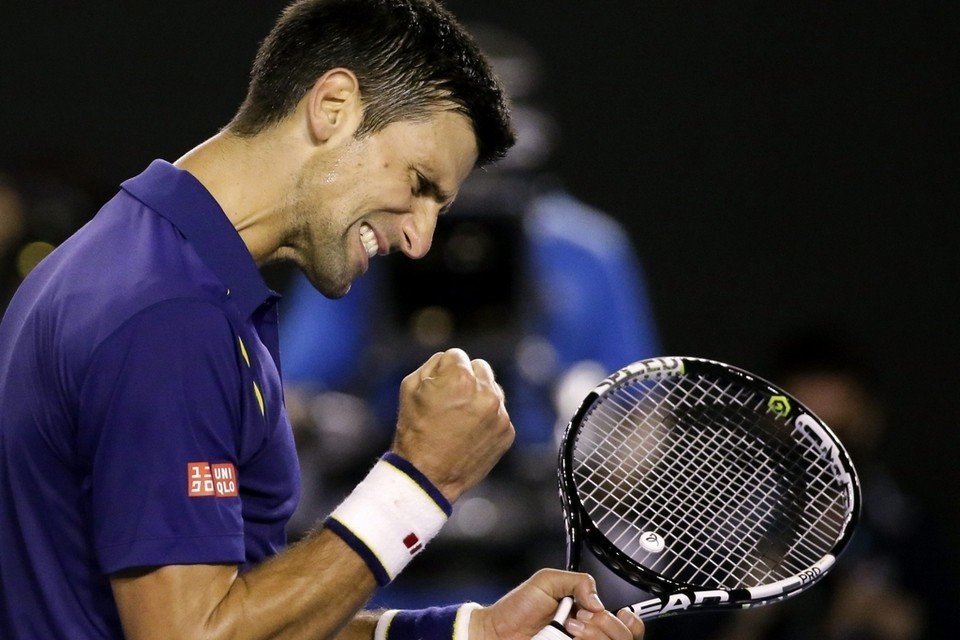 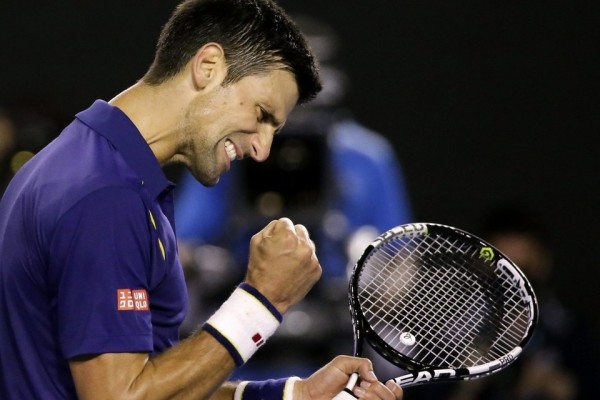 Novak Djokovic defeated Andy Murray in straight sets on Sunday to win the Australian Open and capture his 11th Grand Slam title. This puts him at seventh on the list of all-time leaders, tied with Bjorn Borg.

The Grand Slam was there for the taking last September in New York, and though Serena Williams faltered there and also faltered in the final in Melbourne on Saturday, the Grand Slam is still very much on the table.

To watch Novak Djokovic sweep aside Roger Federer and Andy Murray — the two men closest to him in the rankings — in the closing rounds of the Australian Open was to watch a champion still very much in command.

Federer had to scramble just to avoid humiliation in the semifinal before losing in four sets that featured plenty of sensational shot-making but a dearth of true suspense. And though Murray — stubble-faced and full of howling desire — made Djokovic grind for his record-tying sixth Australian Open singles title on Sunday night, Murray still could not manage to win a set even if the second set alone lasted an hour and 20 minutes.

Final score: 6-1, 7-5, 7-6 (3) in favor of Djokovic, who is now tied with Roy Emerson for the career lead among men’s champions at this Grand Slam tournament.

Sunday’s victory also gave Djokovic 11 major singles titles, tying him for fourth on the career list with Bjorn Borg, who was not in attendance at Melbourne Park, and Rod Laver, who was sitting in the front row.

“I can’t lie and say I didn’t think about it,” Djokovic said. “Of course it was in the back of my mind. Coming into the court I knew that I have a chance to make the history. Of course it served as a great motivation, as a great imperative to play my best.”

Djokovic’s latest clutch performance in a major final also led to Murray making some less luminous tennis history of his own by becoming the first man to go 0-5 in singles finals at a major tournament.

“Um, I feel like I’ve been here before,” Murray said as he accepted the runner-up trophy for the fifth time.

No, Murray, a great player stuck in a historically top-heavy era, is unfortunately all on his own, although he has — as Bruce McAvaney, the master of ceremonies of Sunday’s awards ceremony, graciously reminded the audience — won Wimbledon, the United States Open and the Davis Cup.

“To us, he’s a champion in Australia,” McAvaney said.

Murray forced a thin smile at that, but the reality is that Djokovic, once his good friend and tennis equal, is ever more his nemesis.

They have similar styles and tennis gifts, but increasingly disparate curriculum vitae. Djokovic has beaten him 11 times in their last 12 matches and in four Australian Open finals. (Murray lost his first to Federer in 2010.)

This loss was poignant in that Murray had continued on in the tournament despite his wife, Kim, being late in pregnancy back in Britain preparing to deliver their first child. Kim’s father, Nigel Sears, who coaches the women’s star Ana Ivanovic, also collapsed during the tournament and had to be hospitalized before returning to Britain.

“You’ve been a legend the last two weeks,” Murray said, tearing up as he delivered a very long-distance message to Kim at the postmatch ceremony. “I thank you so much for your support, and I’ll be on the next flight home.”

Murray, the second seed, started slowly Sunday and lacked the requisite freshness and precision to stay with Djokovic. He took more risks as the match progressed and the rallies ramped up in quality.

“I don’t know how far off I was tonight,” Murray said. “The first set, you know, I wasn’t there, but the second and third sets I do think were very close. I do think I could have played a bit better. I didn’t think I hit my forehand as well as I could have done. When I did in the third set, that helped me out a lot. I was able to get myself into the net more. I was able to play more offensive tennis then.”

But the level of offensive tennis required to knock off Djokovic at this stage of his career in a best-of-five-sets match is a very great deal to ask of anyone.

“His ability to cover the court is unbelievable,” said Guy Forget, the former French star working as a television analyst in Melbourne. “I mean, Andy has to hit flat with his eyes closed in the corner to make a winner.”

Djokovic is a true all-surface threat, as his record now makes clear. One suspects he would find a way to prosper on sand or wood as well, but it is on hard courts where he is most in his element.

While many European players start on clay, Djokovic took his first cuts at the ball on the hard courts across the street from his parents’ ski shop and restaurant in the Serbian resort of Kopaonik.

The true bounce helps him with his take-the-ball-early timing, and it also suits his movement: allowing him firm footing to push off and make abrupt shifts in direction, particularly when extended wide in the court. That is, if he’s not in the middle of a hard-court slide.

It is quite a sight, quite a package, and eight of Djokovic’s 11 Grand Slam singles titles have now come on hard courts: six at the Australian Open and two at the United States Open.

Both tournaments use a cushioned acrylic surface from the same manufacturer, although the United States Open surface has been generally quicker through the years.

But the next Grand Slam question for Djokovic is whether he can finally win the big one on clay. The only Grand Slam singles title he lacks remains the French Open, where he has lost three of the last four years in the final. And with Rafael Nadal, the nine-time French Open champion, still struggling to recover his big-match mojo, Djokovic should be the man to beat in Paris this time.

He is already — based on results over the last two seasons — the best player on all the major surfaces: clay, grass and hard courts. That alone makes a true Grand Slam possible, which requires winning all four major tournaments in the same calendar year and which no man has managed since Laver did it for the second time in 1969.

He could get hurt; could roll an ankle or blow out a knee on one of his acrobatic lunges or slides. Stan Wawrinka could beat him again at the French Open, as he did last year in the final. Big-serving, much-improved Milos Raonic could knock off Djokoivc at Wimbledon. The Olympics, which are one of Djokovic’s major goals and come in early August, could take too much out of him before the last Grand Slam of the year: the United States Open.

“I think the U.S. Open could be the trickiest; how all the players manage their schedules and who comes out the best from the Olympics,” the tennis analyst Robbie Koenig said. “But I’ve never felt so strongly at the start of any season, even in all the years I’ve been commentating with Federer and Nadal, that a guy could win all four majors.”

Djokovic won three last year, but complacency does not seem to be in his playbook.

“You can get a big slap from karma very soon; I don’t want that,” he said.

He shared an applicable metaphor he had heard about wolves: that the ones running up the hill are hungrier than the wolf already on top of the hill.

He needs to work as hard as ever to remain on top, he said, and then — with the Australian Open trophy back in his possession — he was asked how hungry the wolf was for Paris?

“Very hungry,” he said, grinning. “But wolf needs to eat a lot of different meals to get to Paris. Paris is a dessert.”