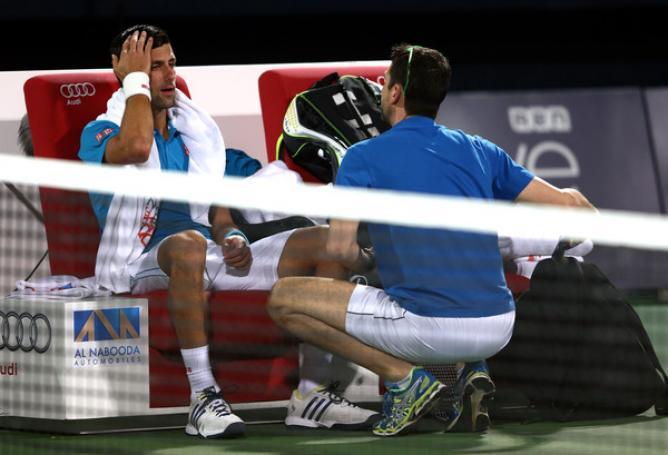 Novak Djokovic was down a set to Feliciano Lopez on Thursday when the Serb was overcome by what he called “an eye problem.” Djokovic claimed that he had a problem with his eye ever since he arrived in Dubai.

“It started with an infection,” Djokovic stated, “and then severe allergy.”

Djokovic continued and said that it was “the first time (he) had such a problem” but he must have been referring to the allergy specifically as opposed to eye problems in general. After all, Djokovic suffered from an irritated eye at another stage of his career. Playing in the 2010 ATP World Tour Finals, “an eye problem” seemed to cause him a match against Rafael Nadal.

At that time, back in 2010, Djokovic claimed it was the first time it “happened to (him)” in his life, stating that “one eye is not enough” when “you have Nadal across the net.” The ATP Tour isn’t the land of the blind, so the one-eyed man isn’t king. Apparently you need both eyes to defeat Feliciano Lopez as well.

The win for Lopez gives him a good look at making the ATP Dubai final. He will only have Marcos Baghdatis to defeat in the semifinal, a strong player but one that has not played consistently well for a few years now. Once upon a time, Baghdatis made the Australian Open final, but in 2015 you could sometimes find him scrounging around for ranking points in challengers.

Baghdatis advanced to the Dubai semifinals through Viktor Troicki, Vasek Pospisil, and Roberto Bautista-Agut – three tough players that Baghdatis is more talented than. If the Cypriot beats Lopez, then I think it would signify that he is back to being a significant force on tour.

Players that remain alive on the other half of the draw are Stan Wawrinka and Nick Kyrgios – a match-up that makes the other semifinal a grudge match. The last time those two players met was in Montreal when Kyrgios made his very off-color remarks mid-match about Wawrinka’s girlfriend’s past sex life. I would expect both players to play down the history, but I don’t see how Wawrinka will want to do anything but play his best on Friday.

In truth, you have to wonder how much Kyrgios has left in the tank right now. Last week he won a 250-level title, and now he’s amidst a deep run again. I’m surprised that he made the semifinals in Dubai, but I think that he will run out of energy if Wawrinka pushes him deep.

As things have shaped up, the Dubai final looks like it will be Wawrinka vs. Lopez but really the tournament is open now that Djokovic is out.