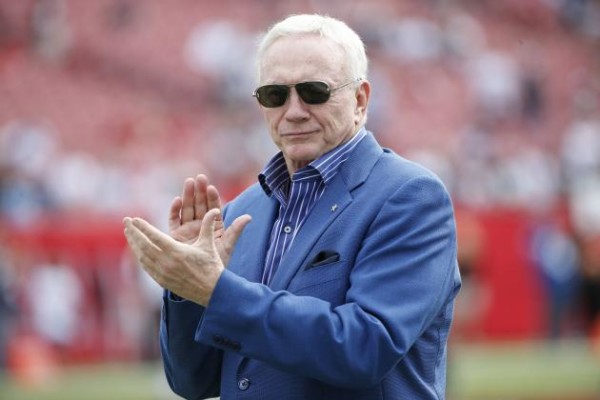 #AskJerryJones Turns Out As Expected

Let me preface this with a big ole’ What the hell were y’all expecting?

The “NFL HQ” Show on NFL Network ran a promotion Wednesday where fans could use the hashtag “#AskJerryJones” to ask the Dallas Cowboys owner questions for his upcoming interview. Jerry Jones wasn’t exactly the Prom King before signing and defending Greg Hardy, so giving the people of Twitter a free run at him may not have been the best idea.

I think they learned their lesson:

“Rae Carruth is expected to be released from prision (sic) in 2018. With a need at WR, will you be interested in signing him? #askjerryjones,” tweeted @KingFavre. No, that’s not the real Brett Favre, just for the record.

For those who don’t remember, Carruth was a receiver for the Carolina Panthers who was arrested and found guilty of conspiring to murder the women he impregnated. He’s been incarcerated since 2001, but a comeback at age 44 isn’t out of the question when Jones is concerned.

“Since Joseph Randle assaulted a police officer do you plan on re-signing him and making him the starter? #AskJerryJones,” said @AnthonyBeers.

Jones has to be considering it.

“If OJ Simpson, Greg Hardy, and Pablo Escobar were all in their prime and available which one would you sign? #AskJerryJones,” said @brendanoconnor0.

Gotta think he would go with Simpson, but Escobar has to be one of the best of all-time at moving the rock…get it? Cause he was a drug dealer…Like, crack rocks…Sorry, I’ll stop.

And then there’s my personal favorite by @calbears96:

“#AskJerryJones if you could go back in time and murder baby Hitler, would you do it or sign him as a defensive back?”