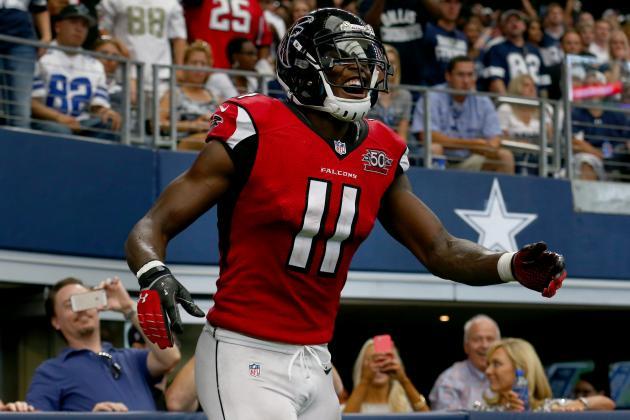 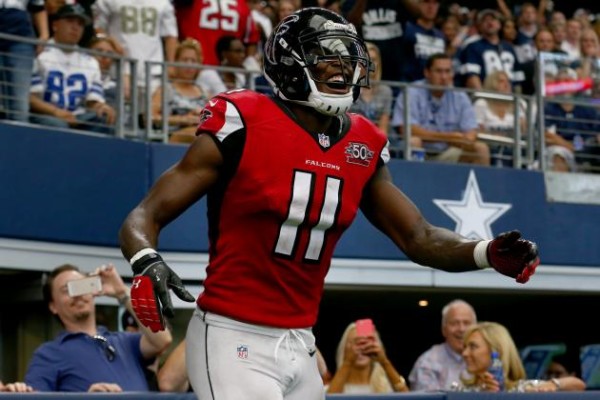 The Atlanta Falcons weren’t exactly the most talked about team heading into this season, but at 3-0 they’re starting to make headlines—especially wide receiver Julio Jones.

The former Alabama superstar is sitting on 440 yards and four touchdowns so far this season, including 164 yards and two touchdowns on 12 receptions this past week against the Dallas Cowboys. The craziest part is Jones was held to three catches for 27 yards in the first half by Morris Claiborne.

Things didn’t go Dallas’s way so much after halftime.

“They put him in different spots,” said Claiborne. “They got him underneath. A lot of pick routes. A lot of guys in the way to get him open.”

In the second half, Jones had some more favorable defensive matchups, and a few big plays later, including a 45-yard touchdown on an inside slant, the Falcons came back from an 11-point halftime deficit to top the Cowboys 39-28 and improve to 3-0 on the season.

So the Falcons are undefeated, and Jones now holds the NFL record for most receptions over the first three games (34) and became the first Falcons player to record three 100-yard performances to start the season.

So does this mean the Falcons are legit? Well, that’s hard to say. Julio Jones is legit, that much we know for sure. But I think you’ll understand my skepticism of the team as a whole. After all, the Falcons have only won 10 games over the past two seasons, the sixth-worst record in the league over that time frame.

Sure, the Falcons are already sitting on 50 percent of their win total from last season, but they’ve all been very close games against two teams that haven’t been so hot and then the Cowboys who were without Dez Bryant and Tony Romo.

On top of that, all three of Atlanta’s wins required fourth quarter comebacks. Yes, that says a lot about Matt Ryan and the return to form of Matty Ice, but it also makes you question why they weren’t doing that for the first three quarters of the game.

Unfortunately, the world may never know. The Falcons have arguably the easiest schedule in the NFL, with only the Carolina Panthers and Minnesota Vikings having winning records. As a result, we will have to wait until December 13th when the Falcons travel to Carolina to see if they actually have what it takes to make the playoffs.

Well, maybe the Indianapolis Colts will get it together. Then we’ll find out around Thanksgiving.

Until then, let’s just appreciate the greatness that is Julio Jones.