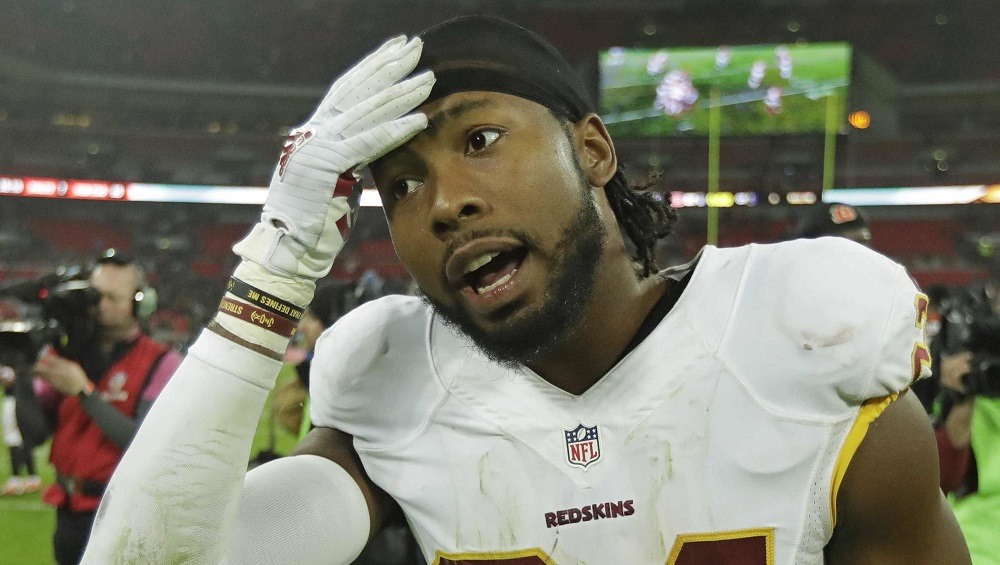 When Josh Norman joined the FOX NFL Sunday crew for Week Nine, he had a few questions for NFL Insider Jay Glazer about some cash he’s had to shell out recently.

After the Washington Redskins had tied the Cincinnati Bengals last Sunday in London, Norman ripped into the officiating—Official 88, Brad Freeman, in particular. Apparently, Norman wasn’t happy about being flagged five times (four of which for illegal use of hands).

“Who is Official 88?” asked Norman after the tie. “I’ve gotta know. You suck. I’m just putting it out there. We play a physical game; they know that. We come here international game, it all goes out the window…He needs to be reprimanded.”

Norman was fined $25,000 for his comments; however, Carolina Panthers quarterback Cam Newton said the officiating was bad last week, and instead of getting fined he got a meeting with commissioner Roger Goodell to address the issue.

So, Norman took the opportunity on the pregame show to ask NFL Insider Jay Glazer the reason for the “excessive” fine.

“Their reasoning is that you called out a specific official instead of just saying that ‘overall officiating sucks’” explained Glazer, likening Norman’s comments to Newton’s. “Because of that, the referees’ union, the officials’ union, they got very upset about it. So as a result, yeah the league definitely got you harder than they normally would have.”

Former NFL VP of Officiating Mike Pereira agreed that singling out a ref was the problem.

“When I was in the office, we were really liberal with players and coaches criticizing officials, criticizing officiating. Cam Newton did it, but he didn’t single out anybody, and that was the line drawn in the sand. I think everything you said was fine until you said ‘who’s No. 88?’ And then it brought his name into the equation, and then ‘he sucks.’”

So the moral of the story is, if you single out an official, you’ll pay a hefty fine; however if you win MVP and complain about the refs, the commissioner will work with you directly to fix the problem.