Today is the third anniversary of Jared Padalecki’s ‘Always Keep Fighting’ campaign – three little words that inspired so many people. I think we all knew, the first time Jared said those words, just how much they meant. We knew that those words and that sentiment, were the mantra of the Winchester brothers, the iconic characters who Jared and Jensen Ackles portray on Supernatural. For those of us who love the Show, Sam and Dean’s determination to “always keep fighting” had inspired us for a decade. But when Jared brought that inspiration to “real life,” those words took on an even greater power.

The first AKF charity campaign took Represent.com by storm – the passion of the SPNFamily had never burnt so brightly or been so united. More campaigns followed, some jointly with Jensen or Misha.  As ‘AKF’ became something many of us lived by, it soon became clear that for Jared, those three words had a very personal meaning – one that he decided to share, courageously, by writing a chapter in a book. We began to put together ‘Family Don’t End With Blood’ in 2015 (which you can get here if you’ve not already), shortly after Jared’s ‘Always Keep Fighting’ message lit up San Diego Comic Con in an unprecedented way. When I got the first draft of the chapter he wrote, I was floored by what AKF meant to Jared, and how much his own life experience had inspired his determination to help others keep fighting.

It’s three years later, and the AKF campaign and the chapter Jared wrote in Family Don’t End With Blood have done just what he hoped they would. Countless people have found the strength to keep going because of those three little words and the personal struggle that Jared had the strength to share in his chapter. I hope that the inspiration that so many of us have found in his words is reflected back to Jared a thousandfold. Working with him as he struggled to write his chapter and tell his story honestly and openly, without censoring himself – because it was so important to him to be real with everyone who would read it – was an inspiration to me. When I feel like something is too much, like it would be easier to give up, I remember that he didn’t. Not in writing the chapter, or in keeping fighting. I hope he knows how much he inspires me, and so so many others.

In celebration of the AKF anniversary, I thought I’d share a short excerpt from his almost 30-page chapter in “Family Don’t End With Blood” – one I’ve re-read many many times.

So, there I was, sitting in an airplane after filming for four days, en route to San Diego….I was going to a city where I had no home base, where I had no quiet corner to excuse myself to in case of a panic attack. I was going to a city that gets an influx of 200,000+ visitors during the week of Comic-Con. I was going to a place where I would be looked at by thousands of people. Would they judge me? Did they think less of me after my not-so-private struggles? Would there be people in the audience who’d worked long and hard to see me (and others) in Rome and Australia, whose money and time I’d wasted? How would I apologize? How could I even begin to apologize? Was I supposed to just get up there on stage in Hall H and smile and pretend I hadn’t let thousands of fans down? Hell, I would hate me, too. What do I do???

As I mentioned before, an airplane is a terrible place to have a panic attack.

But I got through it. I employed some of the breathing techniques I had learned and practiced, and I was able to read a few things I have that are special and private to me, and that helps a lot when I start to panic or feel helpless…My Sunday experience at Comic-Con is always a whirlwind: round-table interviews and red carpets, photo shoots and meetings, Nerd HQ, and, of course, Hall H.

Now, for those of you who haven’t had the good fortune and opportunity to experience Hall H in person, lemme tell you, it is a sight to see. It is a room that seems large enough for an airplane to take off, fly around inside, and land. It’s enormous. And terrifying. I’ve been told that it holds 6,000+ people, not counting standing room. I don’t find that difficult to believe.

Suffice it to say; I was pretty nervous. My anxieties and self-doubts from my flight down were starting to surface again. Here it was: I was about to confront 6,000+ people whom I had let down. And I didn’t know how to apologize. Furthermore, I didn’t want to commandeer the mic and start talking about my personal issues. It was sort of a no-win situation.

But then it happened. As I sat onstage, a sea of lights appeared before me. Were they cell phone cameras? Lighters? It wasn’t immediately clear to me. But then someone behind me (I still don’t know if it was Richard Speight or Rob Benedict—our moderators—or someone else entirely) tapped me on the shoulder and handed me a note. A fan had made thousands of tea lights with a reminder to ‘Always Keep Fighting’ and handed them out to the people in Hall H. The giant hall was lit up in support of me and that message. 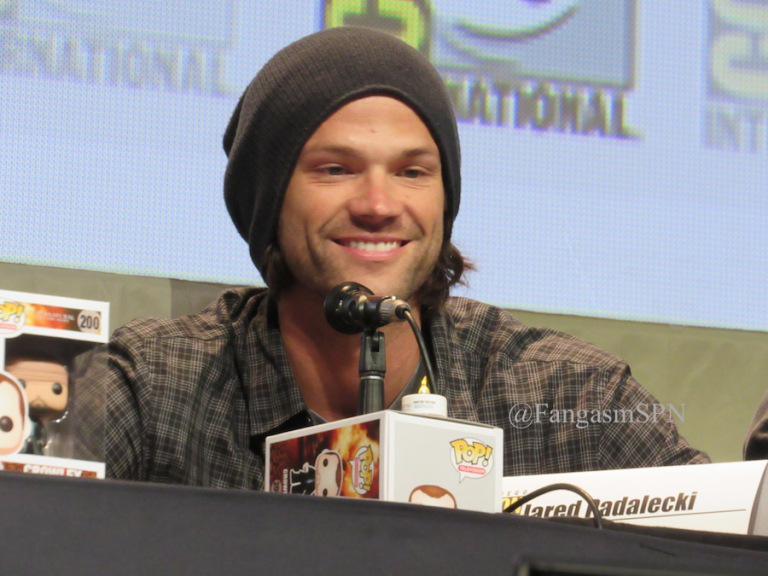 Since memory is faulty, I’m going to copy my Facebook post from that day, since that will be the best snapshot of how hard it hit me:

To anybody and everybody that had ANY part whatsoever in the Always Keep Fighting Hall H tea light event.

As I travel back to Vancouver from San Diego Comic-Con, with my partners in crime Jensen Ackles and Mark Sheppard, the enormity of what happened is finally starting to sink in . . .

I am beyond moved.

I feel so blessed, and grateful, and honored to be a part of the magical Supernatural family.

Sitting on that stage in Hall H, I initially mistook all of the lights for cell phone cameras. It’s difficult to discern specific shapes and faces with all of those stage lights shining on you (and it’s quite intimidating up there, sitting in front of 6,500 people!!). Then, when I had a light given to me with an explanation of what it was and what it stood for, I was (and am still) gobsmacked.

From the very bottom of my heart and my soul, thank you so much.

Though I happened to be the one sitting on stage, I am but one small light in a sea of thousands. TOGETHER, we can and will make a difference!

Keep letting your light shine. I will do the same. And, keep fighting.

The light that was given to me that day still sits in my office (as does the note that was handed to me on the stage explaining what was going on). It always will. It is more valuable to me than any award or accolade ever will be. It helps put to rest one of my greatest fears: that I’ve let the fans down. Sometimes, when I still feel like I’ve failed somebody, or let somebody down, I’ll walk into my office, and see it, and remember that I have an entire family out there that wants me to know that “just” me is “just” fine.

That’s the real miracle of “Always Keep Fighting.” Jared began this movement to encourage all of us to never give up, to keep on going, because we are all – every single one of us – worth it. And then the Supernatural fandom, in its miraculous way, was able to turn that message around and give it right back to the man who was generous and caring enough to start it in the first place. The reciprocity of that, the uniqueness of that, blows me away every time.

So Always Keep Fighting, everyone.  You are worth it. And Jared? That means you too.